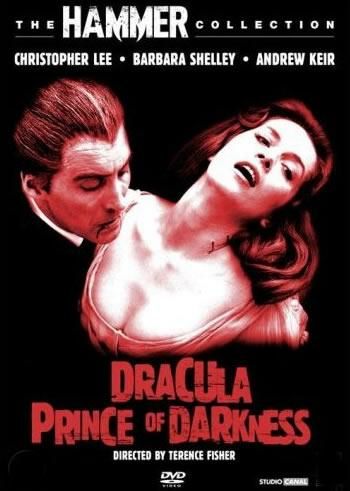 Plot: Four travelers stumble upon Dracula’s castle, whose presence continues to cast a shadow even though he has been dead for 10 years. Unfortunately, he has a servant who plans on using the group as human sacrifices, so he can resurrect his master.

“Horror of Dracula” was a huge success amongst general audiences in the 1950’s, cementing Hammer as the studio which produced the sleaziest, sexiest and most violent horror flicks of their time. It’s rather strange saying that as of 2014, since the majority of Hammer’s exploits are rather time by todays standards. “Horror of Dracula” also confirmed the star status of both Christopher Lee and Peter Cushing, while ultimately becoming Hammer’s most iconic creation. Despite its fame and fortune, however, Hammer chose to focus on making a franchise out of “The Curse of Frankenstein” and even “Terror of the Mummy” before finally returning to Dracula. This was because Christopher Lee had no desire to reprise the role, so they chose to focus on Peter Cushings’ Van Helsing for “Brides of Dracula“. Even though it’s pretty good, the lack of Dracula was distracting and presumably audiences didn’t flock to the theaters to check out the Dracula-less Dracula movie. “Dracula: Prince of Darkness“, produced eight years after the original, is often regarded as the first TRUE sequel to “Horror of Dracula“- because Sir Christopher Lee is back as our favorite bloodsucker. Unfortunately, fans were then annoyed that Peter Cushing wasn’t around to fight him! But gothic gold was struck and now a franchise- albeit a mostly misguided one- was finally on the way. “Dracula: Prince of Darkness” holds a special place in my heart because it embodies the kind of gothic horror flick that you just don’t see anymore. There’s a subtlety about it, a deceptively simple finesse that can only seemingly be found in 1960’s England.

Like most successful Hammer horror flicks, “Dracula: Prince of Darkness” relies on eerie and ominous dialogue, along with the actors’ performances when delivering said dialogue. I’ve always found it ironic that good acting has been reduced to being treated as an unimportant indulgence within the horror genre, when it’s the actors who often sell the fear of what is going on. If they can act convincingly terrified or terrifying, then that will leave an impression on the audience. Christopher Lee (Dracula), despite being the major selling point of the film, only has a few minutes of screen-time and he speaks no lines. Yet he has such an intense, animalistic presence that whenever he does show up, it’s a heart stopper. Klove (Phillip Latham) definitely has an unnerving presence as well, but whereas Lee’s Dracula is a straight up monster, Latham’s Klove is just weird. The characters are visible uncomfortable around him, which adds to our already growing feelings of unease. As for our heroes, the group of four are rather generic, but they aren’t unlikable. In fact, their characterizations are rather restrained. One brother is wild and the other is straight laced, but those attributes aren’t portrayed broadly. Helen (Barbara Shelley) is the crankiest of the group, always shrieking and complaining, but even that isn’t taken too far. I actually usually agreed with her, so I never found her to be annoying. She conveys fear so believably that it goes under my skin as well. Of course, the coolest of our human characters is Father Sandor (Andrew Keir), a gun wielding Priest who is a reasonable religious figure. He’s awesome, but his awesomeness is kind of undermined by some very poor decisions on his part. In fact, the characters tend to do stupid things in order to drive the plot. But I still liked them and didn’t want to see them reach their expiration date. That’s more important than anything.

Terence Fisher mostly relies on his actors as well as the set design, but occasionally he does get a little fancy. He adores introducing characters in dramatic ways, utilizing shadows, music and empowering camera angles. But usually, he just has the camera placed in a way so the action and horror can be captured without interference. The sets aren’t noticeably abstract or horrific, but there is a certain dread that accompanies them. There’s just something not right about the castle, which we can feel along with the characters. I also really dug the ambiance, especially when it came to the heavy wind and crackling thunder. Dracula’s resurrection gave me chills thanks to the heavy ambiance and grisly imagery. Horror of today focuses on gore or over-the-top set design or flashy editing or elaborate jump scares, but “Dracula: Prince of Darkness” lets the creepiness speak for itself. The minimalist style of direction really does work within this setting and while I am perfectly fine with contemporary scare tactics, you just don’t see this kind of low key horror anymore. That might make “Dracula: Prince of Darkness” seem better than it really is, as there are some noticeable flaws.

There is a breach within the pacing between the second and third act. The build up had been perfect until they flee the castle, a very thrilling sequence in itself, in which it subsequently becomes uneven. It’s as if the climax occurred around the half way point and afterwards, everyone must sit down and talk about what just happened. Eventually the action picks up and it’s pretty good, but I was still exhausted from the first major confrontation with Dracula. It could not be topped, nor could the previous energy be recaptured. I also thought the ending was pretty stupid, which would become a trademark of the franchise. They don’t explain this weakness until right before it happens and I was left with a feeling of “huh?“. As I said earlier, there is some plot induced stupidity from the characters, which is especially baffling when other scenes show them as smart and resourceful. Yet I could forgive these weaknesses because “Dracula: Prince of Darkness” is a lost art form, which can only be found within its time period. I miss this kind of slow burn suspense, the creepy castles, the noisy wind, the cackling thunder, the dramatic zingers whenever a baddie would emerge from the shadows and everything else you could get out of a Hammer horror picture from the 60’s that you can’t find now…even from Hammer horror pictures. I liked “The Woman in Black“, but beyond its retro setting, anyone could’ve made that movie. But only Hammer during the 60’s could’ve made “Dracula: Prince of Darkness“. While it doesn’t compare to the original, I’d say it’s a slight step up from “Brides of Dracula“. Yet it would promptly be surpassed by “Dracula Has Risen from The Grave“, which is a personal favorite of mine. So my next Dracula adventure should be “Taste the Blood of Dracula“, which is often regarded as the last exceptional Dracula movie before the franchise began to go downhill. But will I agree with that sentiment? You’ll have to perform a blood sacrifice to find out! Although hopefully my next review won’t end with me dying by the power of moving water…That would be retarded…

Nudity: None, but the rape subtext is always present.