“Attack the Block” is a sci-fi/comedy/action/horror film from England that stunned everyone by actually being good. Professional and amateur reviewers alike joined together in their praise for the movie, some even calling it one of the ‘best action movies ever made’. Naturally, the more hype the movie got, the more I licked my lips in anticipation. Then I saw the movie and was disappointed. “Attack the Block” is a pretty good movie and that might’ve been a problem. The first wave of viewers had no expectations for the film, so when it turned out to be pretty good, they overreacted and that lead to the movie being over-hyped. Still…pretty good though.

(Written and directed by Joe Cornish) 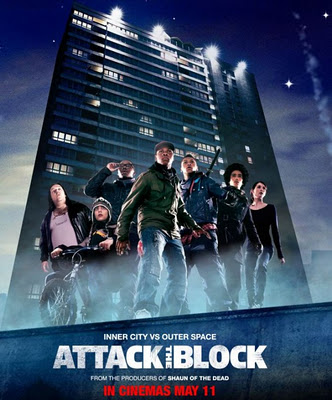 Plot: Sam (Jodie Whittaker) is having a bad night. She’s mugged by a group of teenagers, lead by Moses (John Bogeya). The robbery is interrupted when an meteor of some sort smashes into a car that was right next to them. She flees, but it turns out that it was an alien and the thugs immediately kill it. When even more ‘meteors’ are seen crashing into the city, they decide to take the rest of them out. But it turns out that these ones are a lot bigger and a lot more dangerous. They find themselves chased back to the block (apartment complex) where Sam happens to live, and they have to team up to survive.

“Attack the Block” is a genre bending movie that’s not unlike “Hot Fuzz” or “Shawn of the Dead” in terms of balancing horror or action/comedy. The problem is that it’s not as funny as either of those two films. Maybe because it’s more British and I didn’t understand a lot of the lingo? I did occasionally laugh, especially when Nick Frost (Ron) or his weed room is involved. Generally though, I just saw a bunch of punk kids acting annoying. The attempts at comic relief felt too familiar to me (example, the runts wanting to join them) and the characters were more obnoxious than goofy. Thankfully, the characters began to grow on you. While this isn’t a ‘deep’ movie- well, except for that misfired ‘helping the kids’ message that’s forgotten after two seconds- I did feel they did a solid job of fleshing out the characters enough to where I started to care for them. I still wasn’t laughing as much as I had hoped, but I at least was engaged. 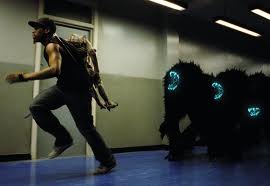 But what about horror? Action? There is some suspense and a few moments are pretty creepy. I did like the monsters design, even if it’s just “black fur, glowing teeth”. I personally thought the glowing teeth angle was sort of chilling and it lead to some startling sequences. I wouldn’t say the film was scary, but it did occasionally draw some fear out of me. The action is relatively low key, but was competently executed and the finale was electrifying. That had a great use of slow motion and was easily the best scene in the whole movie. Part of the appreciation for this film is certainly the low budget. There wasn’t a lot of money to work with, but the film looks more lavish than it was. Joe Cornish created an adequate horror and action movie here, containing a bit of both worlds, but the reviews made me expect an exceptional horror and action movie. I wanted it to be scarier, more exciting and more memorable. Instead I got an enjoyable feature that probably won’t stick with me for very long.

Is there anything exceptional about it? I thought John Bogeya was great as the lead. He delivered a stand-out performance and I expect big things from him. He also develops nicely to where I was totally rooting for him at the end, despite his detestable beginnings. The rest of the cast is strange because most of the thugs deliver their lines rather stiffly, but manage to be endearing despite that. But “Attack the Block” will be remembered (by me) as just another movie that failed to meet my expectations. I expected greatness, but instead I just got a good movie. This showcases the dangers of the reviewing community and relying too much on them. “Attack the Block” is entertaining and well made, but should it go down as anything more? Nah. But I do wish to stress that I liked the movie. It has some impressive moments and it had a strong pace. It’s a likable movie, it’s just nothing spectacular.

Violence: Rated R. It has one really brutal moment and the rest is pretty vicious too. Not overly gory, though.

Overall: “Attack the Block” is worth watching for its solid entertainment value, but don’t allow yourself to get absorbed by the hype.