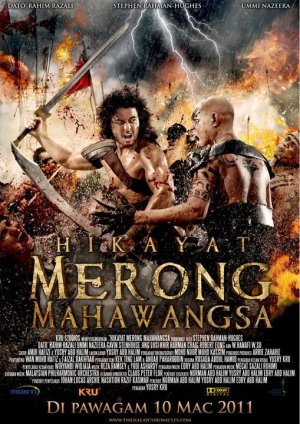 Plot: Merong (Stephen Rahman Hughes) is the troublesome Captain of a humble ship, who claims to be a descendant of Alexander the Great. He gets an offer he can’t refuse, which entails of him escorting a young Roman Prince (Gavin Stenhouse) to the Malay Peninsula. The Prince must marry a Chinese Princess (Jing Lusi) for the sake of bringing about peace between the two empires, but mystical Pirates have plans of their own. Based on a Malaysian legend. Released in the U.S as “Clash of Empires“.

I am currently on my knees, hands clasped, giving you the best puppy dog eyes I can muster. You see, I enjoyed “The Malay Chronicles: Bloodlines“. One might ask: “So what?“. Well, I’m pretty sure I’m the only person in the entire world who actually appreciates this movie. It was shredded by critics in its own country and in foreign countries, but online critics made sure to violate it before tearing it into pieces. Then they violated it again. All I can do is throw my arms into the air and yell “NOOOOOO!” dramatically at the realization that once again, I am totally alone. If I were to die today, I’m pretty sure my tombstone would read: “Here lies MartialHorror. He liked “Carnosaur” and “The Malay Chronicles“. May he go f@ck himself“. But what made “The Malay Chronicles” so reviled among the masses? More importantly, why would I find some enjoyment out of it? Hopefully I can express these reasons throughout the course of the review.

“The Malay Chronicles” is a swashbuckling action/adventure flick, full of comedy, tragedy, romance and martial arts! I know, I know, I also have to resist the urge to squee and dance in joy, but please do remember that despite the appealing ambitions, the execution is a whole different kind of whore. Describing the plot above was difficult because there are so many characters, subplots and the story practically changes before they even reach the halfway point. I’m going to come back to this later on, but I constantly felt that it would’ve worked better as a mini-series. The relationships, whether platonic or romantic, are glanced over way too quickly. Granted, this is a flaw that dooms many films, but it’s more glaring here. Both of the love stories are born from the couples bickering at each-other and the sudden transition from ‘I hate you’ to ‘I love you’ was awkward. Disposable romances are a dime a dozen, but even the brotherly bonds between Merong and Marcus seem to come from nowhere. They’re arguing a lot during the first half, or Merong will insult the Roman Prince, but suddenly Marcus is saying “I already thought of you as a brother“? Yeah right. Actually, everything resembling ‘development’ gets no…well, development. Merong’s transition from vagabond to hero is also contrived. Had this been a mini-series, I’m sure everything would’ve flowed much more smoothly. 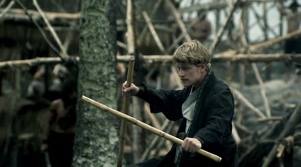 Because there wasn’t enough money to build actual sets, CGI is often used for the back-drops. Sometimes it looks good, but whenever live action characters interact with the effects, the visuals start to look really phony. Nevertheless, I will concede that there is something aesthetically pleasing surrounding the artificialness of the locations. The blood is also CGI, but at least the violence is so plentiful that soon you become used to it. What shocked me was how well put together the fight scenes were. There are a few large scale battles, but I never found them to be incomprehensible. The martial arts is surprisingly well choreographed and while the cast occasionally makes an amateurish mistake (hunching, dropping hands, etc), each of the fights achieve a nice rhythm. My favorite sequence was between Marcus and Kamawas (Khir Rahman), simply because their movements were so fluid and dynamic. Sure, I didn’t understand why Marcus was using what appeared to be an Oriental style and the filmmakers were clearly speeding up the camera, but it looked good on-screen. There also isn’t a shortage of them either and they are placed in the right spots, so the pacing never becomes clunky. The CGI generally doesn’t interfere with the combat, instead it’s used to do lame fire effects and shit like that. So that is primarily why I liked it, why did everyone else hate it?

The acting. The acting and the dialogue. The dialogue is trying to be insightful and poetic, but instead it comes across as cheesy and redundant. At one point, a character suggests someone should go to sleep and the following speech is constantly littered with variations of “go to sleep”. The acting is very difficult to describe, but let me say that I saw nothing wrong with it when they weren’t speaking English. Since I’m not familiar with the language of Malaysia, I can’t judge the acting, but it seemed like the mugging was toned down. However, when they speak my language, I kept feeling like they had learned their English lines phonetically. They usually deliver the sentences clearly, but they put emphasis on the wrong words or syllables. Well, it turns out that most of them are fluent and in some cases, had to learn the other languages using phonetics. So instead, I guess it’s the opposite. They were just trying too hard to sound like they weren’t used to speaking English. Yet I am going to defend the acting. While everyone comes across as either amateurish or overly hammy in their performances, they have a lot of energy behind their delivery. Something about their enthusiasm rubbed off on me, and I started to like them. The protagonist especially has a lot of charisma, which I thought overshadowed his questionable ‘acting’. 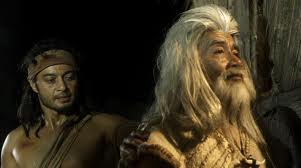 But if there is one thing I will slap the movie upside its head for, it’s the painful attempts at ‘comedy’. The only laughs that “The Malay Chronicles” brought out of me were those slightly uncomfortable laughs. It’s when the villains first appear and start massacring the worst troops in the history of China (I presume) and Merong stops to talk to a dying soldier. After getting some information, he punches the soldier out so it would be a relief from his pain. Yes, it’s played for laughs. Most of the humorous bits are just too silly or forced, like the movie is just trying too hard, but the worst offender has to be the Royal Maid. The actress oversells the character way too much and she practically derails every scene she’s in. I guess the main problem is that the comedic relief is often placed during intense or dramatic moments and it betrays the tone. Yes, “The Malay Chronicles” is intended to be light hearted, but having Merong make goof quips while the good guys are being massacred in mass just takes away from the impact of what’s going on.

If you were to argue that “The Malay Chronicles: Bloodlines” sucked, I wouldn’t have the heart to disagree with you. Yet I would inwardly defend the movie, because I liked it. I wouldn’t necessarily have a lot of substance within my internal argument, but the good thing about silently arguing with someone is that you can’t lose. But I can definitely understand the negative reception, although I don’t think it deserves THAT much hatred. It’s one of those rare cases where its strengths and weaknesses appealed to my sensibilities. I do still believe that it would’ve made a better mini-series. The story and characters would’ve been explored to their fullest and the production values would’ve looked great within that context. It would’ve reached its full potential. But as it is, I had some fun.

Violence: Rated R. Pretty graphic, although the blood is CG.

Nudity: None, although it does occasionally tease us with silhouettes and a bath scene. There’s also the threat of rape.

Overall: I liked “The Malay Chronicles: Bloodlines“, but I am one of the few people who felt that way. If you do decide to check it out, you’re doing so at your own risk.