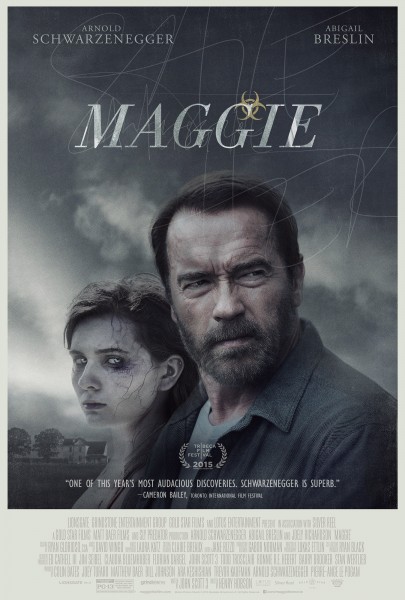 Plot: Wade (Arnold Schwarzenegger) finally tracks down his daughter Maggie (Abigail Breslin) amidst a zombie outbreak, only to discover that she has become infected by the zombie virus. As she slowly begins to turn, they spend her final days together.

When I first heard that Arnold Schwarzenegger was doing a zombie flick, my immediate presumption was that the bulk of the running-time would be dedicated to him mowing down hordes of the undead with a big-ass gun while firing cheesy one-liners like “You’re Dead, Zombie.“…Granted, “Maggie” is a pretty fruity title for a testosterone filled bloodbath, but maybe that’s the name of his gun? F@CK NO! “Maggie” is a little bitch of an action-horror movie, where instead of shooting guns or getting eaten, people talk about their feelings. Actually, they don’t even do that! They just stare at each-other for long periods of time, looking morose. But who wants to see that nonsense? People want to see gore, explosions, zombies ripping guts out and Arnold’s oiled up shirtless body glistening in juicy slow motion. They don’t want any of this homo artsy stuff. I want to watch people shed blood, I don’t want to shed tears…*ahem*…Not that I cried or anything *sniffle*…I didn’t cry…I don’t cry! WAAAAAAAAHHHHHHH, it’s just so saaaaaaaaad!

Okay, in all seriousness, remember one thing about “Maggie“: It’s a drama that just happens to have a horror setting and an action star playing the lead. Do NOT expect excitement or scares, but instead brace yourself for a methodically slow character piece. I understood this by the time it began playing on my television, so it didn’t affect my viewing experience. I have to confess that I’ve yet to really make up my mind on “Maggie“, only being able to acknowledge that it’s not a bad movie- although I haven’t figured out whether it’s good or great. Arnold Schwarzenegger has earned the most praise, delivering a completely introverted performance that is certainly his most dramatic to date. He does a great job, but I regret that his acting has somewhat upstaged Abigail Breslin, probably because we don’t expect as much from Schwarzenegger. Maggie (Abigail Breslin) was a much more compelling character and Breslin tackled her much more challenging role with perfection. Henry Hobson is a rookie director, but he has an eye for moody visuals and the tone is depressingly bleak. He makes the best with what had to be a limited budget, but more impressively, he never draws too much attention to the limited budget. After the end credits rolled, I realized that there weren’t many zombies, locations, effects, extras and we never even got to see the dreaded quarantine everyone keeps mentioning. This could be a criticism and for many, it will be, but I’m praising “Maggie” for making enough of an emotional connection with me that I didn’t notice during my viewing. I can’t find any shortcomings within the technical aspects- cinematography, editing, score- and the actors do an admirable job of carrying the film. So why am I not enthusiastic?

I didn’t realize this at the time, but the more “Maggie” remains in my head, the more I realize how superficial it is as a drama. I suppose many might disagree with me and I have to concede that these criticisms might be too personal, but was there really that much content?  The best scenes in the movie tended to be when the characters genuinely interacted with each-other, such as when Wade and Maggie are trolling his wife for her cooking, or when they’re reminiscing about Maggie’s dead Mother, or when Maggie and her ex-boyfriend are bonding over being infected. Those scenes were profound and even threatened to bring me to tears. Yet it seemed like so much of the screen-time was dedicated to characters staring blankly into nothingness, which becomes monotonous after awhile. There isn’t even a lot of variety amongst the shots used for these moments. We get it movie, you’re supposed to be deep and artsy, but would it kill you to try another tactic for building the gloomy atmosphere? I feel like the characters simply weren’t playing ball with the narrative, which offered many interesting ideas that could’ve allowed these people to have more meaningful moments. I liked the possibility that the infected still retain some of their humanity after turning into zombies, despite having no control over themselves, but what was done with that? Very little, because apparently more time needed to be dedicated to Maggie brooding. Why does Wade seem to vanish for long periods of time? You’d think that considering his daughter is dying, he would spend more time with her. He does seem to be evading responsibility for dealing with her fatalistic situation, so maybe he’s intentionally trying to stay away? If so, there is a better way of expressing this idea than just showing off Arnold’s sad face. “Maggie” is a movie where everyone is resigned to their fate, but aren’t sure how to handle the situation. I understand that is the purpose, but I don’t find stories where characters spend the bulk of the time moping to be very compelling. My favorite part had to be when Maggie is saying goodbye to a friend, because it reminded us of the stakes and of the tragedy. I believe that if “Maggie” had more content like that, where the characters can bond instead of pout in their separate corners, then this would be a classic. I also thought the ending was weak because nothing really gets resolved, which left me unsatisfied.

Nevertheless, I’d still say “Maggie” was pretty effective. When it worked, it was golden and I was moved. One thing I did appreciate was how there wasn’t any tension between Wade and Maggie. I was expecting the cliched troubled relationship and most of the running-time would be dedicated to their reconciliation, but they seemed to get along fine from the beginning. Maggie even seems to have a solid relationship with her Step-Mother (Joely Richardson), who tries her best to treat her well despite her phobia of the disease. The chemistry between the characters was so good that I felt robbed for not getting more of that. One does have to give credit to “Maggie” though for being a unique entry within the zombieverse. I have decided that while not reaching its full potential, “Maggie” scored enough points to be considered ‘good’.

Overall:  “Maggie” is good, but not great. Just remember that it is a drama, not horror or action. I cannot stress that enough.