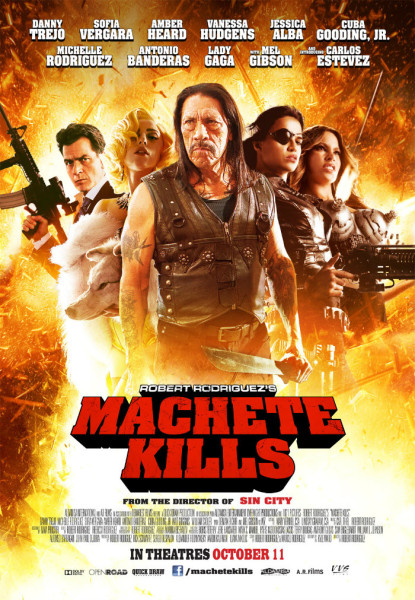 I didn’t dislike “Machete”, but I can’t say I was eager for a sequel either, as much as I loved the “Machete Kills” and “Machete Kills Again” hook during the ending. I thought “Machete” worked much better as a 2-5 minute trailer than it did as a full length feature film. The running time felt padded, its multitude of side characters and subplots cluttered the narrative and made the whole project seem disorganized and messy. Now, granted, the awesome parts were awesome enough to make it worth watching. But the reason why the originals are usually superior to their sequels is the majority of the filmmakers ‘good’ ideas are used for said original, whereas the sequels are usually produced for money using only the fumes of creativity. That’s not a good sign when even the original feels like it lacks content. But I also have to admit that I was curious as to how it would turn out. Rodriguez was in the directors’ chair, after all and maybe he had learned from his previous mistakes. Plus, at least they weren’t cutting any corners with the budget. When you have A-listers like Mel in your cast, you’ve done something right…although that’s probably because Mel did something wrong. So I chose to watch “Machete Kills” and you know what? I didn’t mind it. “Machete Kills” is an acquired taste. You will either like it or dislike it based on its (much lighter) tone. Once I got used to it, I was able to have some fun.

“Machete Kills” is significantly more over-the-top than its predecessor, even to the point of becoming campy in the process. I’ve heard many deride it as descending into self-parody (in contrast to the original, which was more of a throwback with a light dose of satire), or that its style of comedy is more akin to “Spy Kids”, except with more sex and gore…which automatically makes it better than “Spy Kids“. Both of these claims have merit, particularly the last one, as “Machete Kills” is definitely sillier and safer. It lacks the grotesquely humorous edge that “Machete” had on the sharp side of its blade (I’m clever!). Indeed, if this is inferior, it’s because it lacks the laugh-out-loud moments or the cringe inducing violence of “Machete”. It stands out a lot less. Yet I was able to go along with the humor once I became accustomed to it. It’s much like comparing “Moonraker” to “Dr. No”. I prefer the latter because I can take it seriously, but I still enjoy the former on its own. “Machete Kills” had a completely different tone than the first one and it has much different goals. It just comes down to how you react to it. It should be noted that “Moonraker” is considered to be one of the worst Bond films for its campy style of comedy, so you probably won’t be as appreciative of “Machete Kills” as I was. 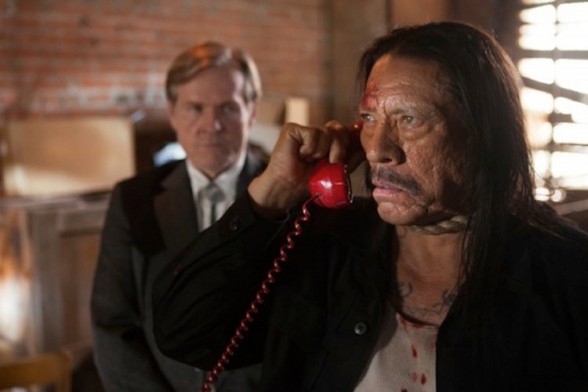 Honestly, my biggest issue is the lack of inspiration. Was it just me or did it often feel like the filmmakers were more interested in setting up “Machete Kills Again…in Space!” than they were in actually making “Machete Kills”. If you thought my “Moonraker” comparison was random, I actually used that because the plot of “Machete Kills” is identical to the one from “Moonraker“, except the space sequences are reserved for the next entry. The movie actually opens with a trailer for “Machete Kills Again”, which I thought looked hilarious and the story only exists to get there. When you actually look at the content of “Machete Kills”, everything is serviceable, yet nothing is exceptional. The plot is standard, the locations are standard, the action is standard and while the kills are graphically violent, the CGI undermines the gore. Throughout my viewing, I kept thinking: ‘this is okay, but “Machete Kills Again…in Space” looks so much cooler. I’d rather be watching that’. Much like how I will never understand why Rodriguez would intentionally have the most hardcore scene in “Machete” take place during the opening, meaning the remainder of the film won’t be able to live up to that, I don’t know why “Machete Kills” would open with a teaser for a much more interesting looking movie. These baffling decisions, along with the awful “Spy Kids 4”, makes me wonder if Rodriguez has finally lost it as a director.

Luckily, I did think “Machete Kills” had a much tighter pacing. Once again, there are way too many characters and subplots, but I thought they were utilized better here. Every character does tie in to the primary plot rather smoothly, even if the Chameleon character had a shit pay-off (once again, apparently that person is being reserved for part 3). Even though the running time is closer to 2 hours, I never became bored or agitated. Everything which occurred on-screen went down smoothly. The cast is having a lot of fun, with Danny Trejo being awesome again as Machete, although it’s obvious his re-occurring on-screen opponent was much faster and stronger than him. Mel Gibson is also very entertaining as the villain and I even enjoyed watching Charlie Sheen (my bad, Carlos Estevez), even though the whole ‘Charlie is a sex monster’ joke died with “Scary Movie 5”…and “Scary Movie 4”…and Charlie Sheen’s real life. Cuba Gooding Jr, Antonia Banderas, Lady Gaga and Walton Goggins all have cameos and they all stand out despite their limited screen-time. Amber Heard and Michele Rodriguez have more to do and I thought they were both highly entertaining as well. Thank God they actually resolved the character of Osiris (Tom Savini). His sudden absence in the first film annoyed the hell out of me. I will say at times, the acting becomes too over-the-top, especially when it comes to Sofia Vergara (Desdemona) and Demian Bichir (Mendez). Their hammy personas were often more annoying than endearing.

“Machete Kills” is one of those movies where I probably sound more negative than positive, but the truth was, none of the mentioned flaws bothered me that much. Above everything, I thought it had a nice flow and once I got used to its tone, it had a certain charm. But if you don’t like the campier approach, you probably will be very upset with “Machete Kills”. Yet even I have to admit that it just doesn’t leave the same impact that its predecessor had. Therefore, I’m going to be a little harsher and lessen the rating, in order to stress its inferiority. But even if it’s a 2 star movie, it’s not far from reaching a 2.5/4 star. I just didn’t like the feeling that “Machete Kills” was just…killing…time before “Machete Kills Again…In Space“…slices…into audiences. Haha, I’m such a silly goose.

Violence: Rated R. The gore is significantly cleaner though this time around.

Nudity: Oddly, I don’t remember any explicit nudity, but there is quite a bit of sexuality.

Overall: You’ll either like or dislike “Machete Kills” based on its level of goofiness. I was fine with it, but this is probably something you should watch as a rental.