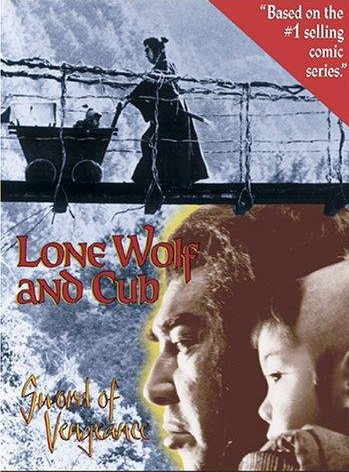 Plot: Ogami Itto (Tomisaburô Wakayama) used to be the Shogun’s head executioner, but after his wife was killed by the treacherous Shadow Yagyu Clan, he takes his young son Daigoro (Akihiro Tomikawa) and becomes a deadly assassin. His eventual goal is vengeance, but for now, he takes a job where he must slay corrupt officials and bandits.Also known as “Kozure ôkami: Ko wo kashi ude kashi tsukamatsuru”

Revisiting “Lone Wolf and Cub: Sword of Vengeance” six years after my initial viewing was quite the surreal experience. My original writing was a masterful work of sucking, although that is to be expected considering my lack of skill back then. Whereas my first coverage of “And Then There Were None” was typed out during a phase where I confused longer with better, my “Lone Wolf and Cub” series of reviews were written during a period where I just wanted to get done with it ASAP. The writing was sloppy, the paragraphs were too short, my word usage was repetitive and I don’t feel I did a good job at expressing my points. Yet what was most bizarre about my discarded review is that I seem to have had a change of heart since then. I initially claimed that “Lone Wolf and Cub: Sword of Vengeance” was uneven, containing cool visuals and a disjointed story. Perhaps my mind has broadened or my sensibilities have changed, but I had a much more positive reaction during viewing #2. “Lone Wolf and Cub: Sword of Vengeance” is awesome. I found myself wowed by the intense performances, brutal sword fights and the flashy, unusual visuals. MartialHorror of 2008 clearly had no idea what he was talking about.

Kenji Misumi is in many ways the Japanese Chang Cheh. Both were hard workers who rarely felt the need to step out of their comfort zone, both in storytelling and visual styles. Their films were competently made, often pushing the story harder than any directorial stamp, but they rarely stood out amongst the masses. This is neither a good thing or a bad thing, it all coming down to personal preferences. Yet they were also among the most important filmmakers of their age, helping mold the conventions and aesthetics which have become synonymous with their genres. But every once in awhile they’d come out with something that would defy our expectations. These rare examples would be daring, ambitious and above everything: Different. “Lone Wolf and Cub: Sword of Vengeance” embodies that something for Kenji Misumi. In fact, it’s downright innovative when it came to action and visuals. Misumi seems to have ignored his past experience and approached this project by putting himself in the shoes of an inspired, creative and inexperienced filmmaker. There are dozens of highly experimental shots, which could’ve looked stupid but instead were awesome. At the time, Japanese directors usually were very simplistic with the editing, as they felt it would distract the audience from the story. Misumi chose to utilize surreal transitions and shot compositions, occasionally bringing individual, detailed panels from the manga directly to life- which was practically unheard of back then. Nevertheless, these cool visual ideas were brought to life by excellent cinematography. Every frame looks gorgeous, but in a very eccentric kind of way. Even as of 2014, very little about “Lone Wolf and Cub: Sword of Vengeance” seems conventional. Even the sequels wouldn’t try to recapture the haunting and colorful imagery, perhaps because it would be difficult to top. The camera seems to always be peering down and around from odd angles, but they never cease to enhance the visuals or action sequences. In terms of the visual style, “Lone Wolf and Cub: Sword of Vengeance” is perfect. Even the cheesy death scenes work! The music is great too, being hauntingly serene or adrenaline pumping in its badassery. I dare you to check this out and view one of Kenji Misumi’s (more common) minimalist works. You’d never guess they shared the same director.

Many casual viewers of samurai features are often disappointed when they realize that these films favor drama over action. There is usually a minimal amount of sword fighting, which often has rudimentary choreography- especially compared to their kung fu brethren. But “Lone Wolf and Cub: Sword of Vengeance” is one of the most action packed examples of its genre. Sword fighting always seems to be around every corner and the visuals definitely give the action lots of flavor. The main draw is the gore, which ranges from cheesy to disturbing. When someone gets stabbed or slashed, blood geysers erupt and red gets everywhere. AWESOME!!! One thing I never really noticed was how aggressive our protagonist is whenever he fights. When he attacks someone, he really looks like he’s trying to cut them. Tomisaburo Wakayama is perfectly suited for this kind of role, dominating the viewer (and his enemies) with his intense presence, which never gets boring. But he does showcase more emotions than just ‘stern’. In fact, while he might not be Shintaro Katsu’s Zatoichi, he emotes quite a bit. When he’s framed, he really looks confused and distressed. When his son chooses the path of the sword, he breaks down into tears. He’s excellent, selling me on the drama and his sword skills. The choreography, as expected from samurai flicks- and yes, I know that I should be calling this ‘Chambara’, but few people recognize that title- is pretty simple. People slash and either miss or hit and our hero promptly takes them out in a violent fashion. Yet it never goes stale despite its abundance thanks to the strategies, the variety of weapons and the emphasis on manga-esque techniques. Ogami Itto’s important duels are often determined with a single attack, but such importance is placed on the attack (from the name to the description to the stakes), that you’re emotionally invested and it ends up looking really cool anyway. Plus, dat gore…

So…why did I only give it a 2.5/4 stars? At the time, I condemned the narrative as broken. The script is comprised of two different stories. The first is the origins of the titular Lone Wolf and Cub, as Ogami Itto’s life as the Shogun’s executioner ends when he’s framed by the Shadow Yagyu. He must outwit and outfight his crafty enemies, while figuring out what to do with his son. This was a compelling storyline that is resolved in an anti-climactic way thanks to its placement. But those are flashbacks and at the same time, we’re seeing the present plot thread unfold. Ogami Itto and his son are now mercenaries and have been hired to kill these four traitors and an assload of bandits. When I first reviewed the movie, I thought this storyline was significantly weaker than the first one. I wanted more of the Shadow Yagyu, but their antagonist replacements weren’t as interesting and seemed inferior in skill. The film obviously knew this, as the ending makes it known that these fools never stood a chance against the Lone Wolf, who defeats them using normal methods (whereas he must be smarter against the Shadow Yagyu). Why would the bigger threat be so prominent during the first half, but not make any appearance in the second half? It’s very satisfying seeing our anti-hero dispatch the bandits with ease, especially when they realize how outclassed they were, but this main storyline felt like padding…Not helped by the addition of a superfluous love interest. That is what I thought at the time… 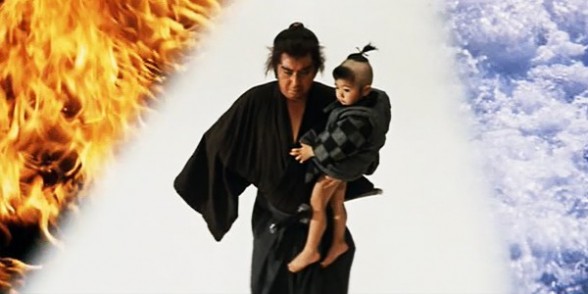 It’s a valid complaint too, but I wasn’t bothered by it during this viewing. I began to appreciate the new villains, as they do have personalities and their interactions with the characters are pretty engaging. Even the love interest has more spark than what we usually get out of the character. I suspect I’ve changed my views because I now understood the long term goals of the franchise. Since I’ve followed the sequels, I know that the Shadow Yagyu are overarching, re-occurring villains while the bulk of the conflict would be dedicated to an independent enemy who likely won’t last beyond the end credits . Even the drop in quality in regards to the antagonists didn’t matter anymore since I understood that it was never about ‘Ogami Itto vs Bandits’ or ‘Ogami Itto Vs the Shadow Yagyu’. “Lone Wolf and Cub: Sword of Vengeance” is about Ogami Itto. It’s introducing us to a very interesting, but troubled character who can be ruthless, compassionate, cold blooded, emotional and very violent- all in one single package. This storyline needed to be this way because it’s all about showing us the different sides of this character, which will make his actions in subsequent films mean more…and it has a lot of violent swordplay too. My last review sucked and was wrong, but “Lone Wolf and Cub: Sword of Vengeance” is just awesome. Then. Now. Always.

Nudity: There is quite a bit, which includes rape.

Overall: “Lone Wolf and Cub: Sword of Vengeance” is a must see for those who want an action-packed, graphically violent samurai flick.

The first entry in the seven film series is apparently known for closely resembling the manga it came from. I have not read the manga, so I can’t compare. I hear though this movie is actually better for fans of the manga, which I can believe, as I thought this film was vastly overrated.

My main qualm is the narrative. Basically, two plots unfold at the same time. One focuses around the conflict with the Shadow Yagyu, and the other has a plot resembling a “Zatoichi” film involving bandits having taken over a town. The issue is, the film feels disjointed and it’s constant going back and forth often confused me. It didn’t help that both subplots felt rushed in their conclusion, and relied on padded filler. I don’t care if the manga was written that way, because certain devices in comics simply don’t work that will on screen.

I did enjoy the visual approach that Kenji Misumi brought to the film. As I said, apparently is closely resembles the manga, but thankfully the visuals work. There is an interesting use of color, use of sound, and all around style to make up for it’s shortcomings. The battle sequences are well done, although I wouldn’t say they are much different than the ones found in Zatoichi(except being a lot gorier). I also loved the sequence where Ogami Itto declares he is traveling on the road between hell and earth, it’s amazingly shot and stunningly beautiful. I think at times it went down the artistic route too much. What was with all the random shots of the monkeys?

I also enjoyed some of the films random humor. I cracked up more than once. There is also a great tactic, which sort of echoes Musashi’s tactic against Kojiro Sasuke in the “Samurai Trilogy”. That also cracked me up. Finally, I really did like the lead characters, so you can bet I’ll check out the sequels.

Tomisaburo Wakayama(Ogami Itto) was superb as the lead. The man is intense, yet shows range at the same time. His laugh was pretty scary as well. Akihiro Tomikawa(Daigoro) is pretty impressive for his age. Weird hair-do though. Tomoko Mayama(Osen) is credible as the love interest.

Violence: Arguably the most violent Samurai film I’ve ever seen. Limbs getting chopped, decapitated, slashed, and believe me, the blood oozes.

Nudity: Quite a bit. There is a rape scene (edited so you don’t see a lot of it) and a fairly graphic sex scene. Ew, I don’t want to see Wakayama in a sex scene! Also, what the hell is with Samurai flicks and breast feeding scenes?

Overall: “Lone Wolf and Cub” failed to blow me away, but it is still worth a watch for any Samurai buff. This movie is incredibly popular, so you might like it regardless of what I say. However, I thought it was sort of disjointed and overrated.