(Written and Directed by Rob Zombie) 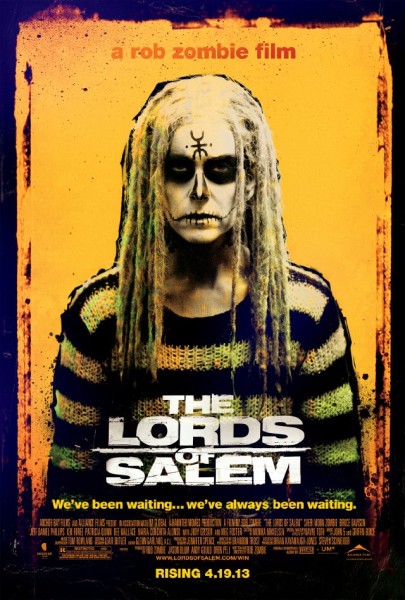 Plot: Radio DJ Heidi (Sheri Moon Zombie) is sent a record by a band referred to as ‘The Lords of Salem’, but the music has a strange effect on her. It turns out demonic forces have an unpleasant interest in our heroine and they’re using the music to rope her into the darkside.

If someone asked me whether or not I was a fan of Rob Zombie’s music, I would respond with: “I like some of his stuff, so I guess so”. If they asked me whether or not I was a fan of Rob Zombie’s movies, I would probably pause for a moment before giving an inconsistent answer. It’s common knowledge that he has a rather polarizing reputation among the horror fandom, with people either loving his work or hating it. Where it becomes complicated for me is…I’ve experienced both emotions when going through his filmography. I LOATHED “House of 1,000 Corpses”, but LOVED “The Devil’s Rejects”. I was okay with his “Halloween” remake, but his “Halloween II” left me grumbling in irritation…although I still wish neither of those films existed, they did have their moments. I was indifferent to his contribution on “Grindhouse” and was weirded out by “The Haunted World of El Superbeasto”…but not in a good way. While his much anticipated “The Lords of Salem” excited me during its production, due to the positive early hype and spooky stills, it was eventually released without much of a splash. Fans were mixed, critics weren’t impressed and the studio which distributed the feature didn’t seem very interested in the project anymore. I can’t say I was interested in it either by that point. Yet through random selection, it was chosen to be my next viewing and….huh….the fuck?

I watched “The Lords of Salem” with a wide eyed, often vacant stare as this movies madness seemed to consume me. It’s…strange, really f@cking strange. Yet I was entranced by its psychosis. Whether I was liking or disliking the film, and my opinions seemed to sway throughout my viewing, I was always mesmerized by it…and you know what? “The Lords of Salem” freaked me the f@ck out, which is not an easy task. Am I saying this is a masterpiece? No, it does have its share of distracting flaws, but I want to stress above everything that you might hate this movie. Usually, when I fall in love with a flick that hasn’t been well received, I become haughty and defensive. In the case of “The Lords of Salem” though, I can not only see why many hate this movie, I can actually even sympathize and agree with many of the detractors’ points. Yet I had such a positive reaction to everything about it to where…I just loved it. I loved it a lot, flaws and all.

The first half plays out like a relatively normal horror flick, if normal horror flicks contained old, naked witches who prance around while covered in mud and filth…We’re introduced to the characters and “The Lords of Salem” actually has a lot of fun fleshing out its rather large cast of characters. We immediately realize that Heidi’s housemates are probably going to be evil, but they’re so affable and funny that I ceased caring that I knew where the story was going. Heidi meets an expert who begins his own investigation and while many might dismiss this concept as clichéd and superfluous, I liked it. I’d generally agree, except I found the character interactions to be incredibly compelling due to the moving characterizations, the strong performances by the actors and the surprisingly creative dialogue. The characters look like heavy metal enthusiasts and usually those characterizations in film are defined by their scary appearances and intense demeanor, but there’s a softness to them here that you rarely see in other movies. The love story is actually very touching, without ever becoming too intrusive. It’s always important to create sympathetic characters, because they drive the non-horror scenes…

“The Lords of Salem” is more strange than scary, but everything about it managed to get under my skin, and I mean EVERYTHING. Seriously, even the actors mannerisms somehow gave me chills even when they weren’t overtly trying to be creepy. Early on, the film relies on some relatively simple scare tactics. Heidi will walk in the room and some sort of creepy spectre will be standing in the background. This is familiar territory, but the way Rob Zombie framed it was pretty unique. For one, usually directors will place the ghosts in the background while focusing on the foreground. Rob Zombie chose to keep the camera at a distance, using music instead of the camera to draw attention to the menace. The second act is much more uneven in regards to how successful its scares are. The Church scene was kind of goofy and the masked man scare which followed fell flat. One of the more controversial moments is when some demonic entity introduces itself and it looks…weird, which I thought fit with the rest of the film. It didn’t bother me, even though I can see why people would laugh at it. I think I was more forgiving because it made its introduction in one of the best scenes in the entire movie…where Heidi enters this gorgeous room. The cinematography…the music (Mozart!)…the set design…everything about that scene was beautifully haunting. The locations are very moody and the use of color is reminiscent of Dario Argento. Many have compared “The Lords of Salem” to plenty of other films and filmmakers, such as “The Shining“, “The Wicker Man“, “Rosemary’s Baby“, Ken Russell, David Lynch, Argento and the list goes on. The inspirations are definitely there, but the final product is its own entity. Zombie might be honest about his influences, but his own deranged vision is very different from anyone else’s. This is good because I’ve always felt it was a mistake to remind its audience of other, better films. “The Lords of Salem” established its own identity, not borrowing too much from other filmmakers and their flicks. The third act…deserves its own paragraph. 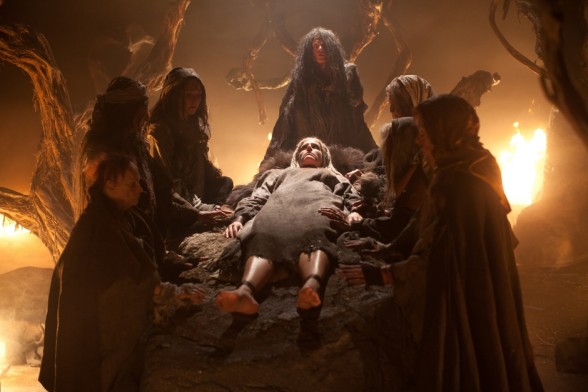 The first two acts resemble a normal movie. It might be rather odd compared to what we consider a normal movie, but it still follows the basic rules of the narrative and how it’s supposed to flow. The third act…does not. Just as the protagonist is losing her mind throughout the course of the film, the movie seems to be descending into insanity along with her. There are a lot of warped, bizarre, nightmarish yet alluring images which seem to have no context. Does each frame have some deep meaning? Or is it just a bunch of cool looking nonsense? I have no idea myself. I’m honestly not even sure if I liked or disliked where the story went…and by where the story went…I mean where it went to die.. But something about it stands out. Honestly, it’s zaniness would usually piss me off and…hell, that kind of shit did piss me off when I reviewed “The Last Winter“. The difference is in that film, it felt like they ran out of money. In this film, it feels more like a bold yet questionable artistic decision. Much like the rest of “The Lords of Salem“, you will either want to make love with the finale, or curse it into the pits of hell. I liked it…I thought it was only fitting that a film so strange would end with something even more abstract.

If there is one I did flat out dislike, it’s how passive the heroine was throughout all of this mayhem. Maybe Rob Zombie was defying the general rules of horror, where the protagonist must solve a mystery and at least try to get out of their predicament. But not Heidi. At first, she’s unaware of what is occurring and when shit gets real, she just becomes paranoid and depressed. At no point does she ever even try to resist the enemy. She just goes along with it. This actually does seem intentional, as various characters even point out that the good guys are doomed to fail, which fits with the very cynical tone. But still…Heidi was an interesting character and Sheri Moon Zombie was spectacular in her portrayal, but I wanted to see her do more stuff than just mope around. Hell, after a certain point, she doesn’t even react to the craziness anymore. Like everything else, this decision can be damned or justified, but this is one thing I personally did dislike about “The Lords of Salem“.

“The Lords of Salem” is either an incomprehensible- but aesthetically attractive- mess which drowns under its own madness, or it’s a haunting masterpiece- albeit a flawed one- which manages to drown its audience under its own madness…but in a good way? The arthouse touches, creative scare tactics, spooky sound design and surreal imagery all worked in unison to give me chills. But it is very strange and it has the tendency to be just as alienating as it is mesmerizing. It’s taken four whole days for me to complete this review, because my thoughts were so contradictory. I had felt like I had become a victim of the movie’s unapologetic, uncompromising vision. It played by its own rules, not my own…but…but…IT WORKED for me! How many times can I say ‘you’ll either love it or hate it’? I’m sorry if I’m being redundant, but it’s true! With that said, I do believe all horror fans should watch it just in case you happen to fit in with the fan crowd. It’s definitely the most ‘advanced’ of Rob Zombie’s films, showcasing his talents more-so than any of his other flicks…even resisting plenty of his usual weaknesses. But it also seems like Rob Zombie loves having his movies descend into insanity along with his characters, based on the finales. It deserves praise for being different, but I also worry that Rob is taking that too far. I can honestly see myself watching “The Lords of Salem” again in the distant future and maybe not feeling so generous. My tastes are constantly shifting and “The Lords of Salem” walks the tight rope between what I want from a good horror film and what I loathe about a self important horror film. But for now, I’m in love with it and believe it will eventually become a cult classic.

Violence: Rated R. Pretty hardcore in its own way, but it’s reserved for a few scenes.

Nudity: Lots of it, but the majority isn’t pleasant.

Overall: I loved “The Lords of Salem“, but that doesn’t mean you will. It’s the quintessential love-or-hate it kind of movie.