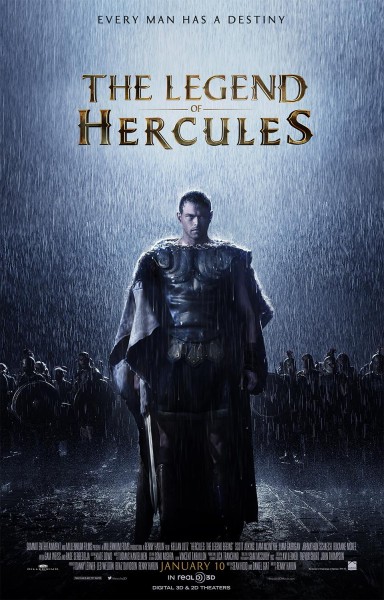 Plot: Hercules (Kellan Lutz) is shipped off to fight an oversees War when he opposes the arranged marriage between his brother (Liam Garrigan) and his love (Gaia Weiss)…and then he becomes a Gladiator…and then he must return in order to oppose the Tyrannical King (Scott Adkins) and save his girlfriend.

When I saw the trailer for “The Legend of Hercules“, I smiled and nodded in approval. I then verbally thanked the trailer for convincing me that “The Legend of Hercules” was going to suck hard, so I had no reason to bother watching it- because I talk to the theater screens. That seemed to be the end of that and I was prepared to make “Lone Survivor” my movie of the week, until I noticed something that would force me to reverse my decision. Scott Adkins…in a major supporting role. You probably know Adkins from either “The Expendables 2“- Van Damme’s second-in-command- or “X Men Origins: Wolverine“- as Deadpool- but I know him as the coolest direct-to-DVD action star ever. His amazing martial arts techniques mixed in with charisma and genuine acting skills has earned him a cult following. If he came around during the 90’s or even 10 years ago, he’d be headlining theatrical releases. But as of 2014, audiences have confused great abs with great skill, so somehow Kellan Lutz- known for playing the larger brother in “Twilight“) scored the lead in “The Legend of Hercules“. Now I felt compelled to see it, even though the studios were really trying their hardest to keep the critics away from their project. Now that I’ve watched the film, does it suck? It has been two weeks into 2014 and “The Legend of Hercules” has already secured a spot on my ‘Worst Films of 2014‘ list. It’s atrocious, but the good news is that Scott Adkins stole the show. Maybe this could lead to Hollywood giving him a push? The only question I have is: Is “The Legend of Hercules” a piece of shit or is it a piece of shit that has a higher purpose? But either way, it’s shit.

“The Legend of Hercules” is yet ANOTHER testament as to why having FOUR writers attached to the same project rarely works. Each seems to have their own story to tell…or maybe they’re just crappy writers and don’t understand how a narrative is supposed to flow. Everything is incredibly rushed. We are briefly introduced to the characters, their relationships and their life situations- although we never learn much about them, so why should we care for their plights? But Hercules is sent to war, yet almost immediately his ‘army’ is conquered and he is enslaved. So maybe his character arc will be based around him learning humility and honor while he is forced to be a gladiator? In a good movie, maybe, but Hercules is so boringly pure that he already knows of such things even before the story begins- making the whole riches to rags subplot pointless. After three fight scenes as a gladiator, all of which takes place almost immediately after the other, he returns to Rome and starts a rebellion. How does “The Legend of Hercules” develop this plot line? He says he’s going to start a rebellion and beats up three guys…Yet just from that, everyone starts following him like he’s the son of a god…This being before they learn he’s actually the son of a god. “The Legend of Hercules” has no interest in exploring any of these ‘side quests’, hastily moving from one event to the other while slowing down PAINFULLY whenever the love story becomes the focus. I know that I’m supposed to accept the plot as being episodic, focusing on standalone adventures that loosely tie into the main storyline. But because Hercules never seems to develop and every ‘episode’ is skimmed over instead of being explored, it often felt like the movie simply had no plot. “The Legend of Hercules” also seems like it’s stitching together plot elements from other stories, from “Clash of the Titans” (and its sequel), “Spartacus“, “Ben Hur“, “Troy“, “Gladiator” to the Bible, although the visual style is more akin to “300“. You’ll see every plot turn and twist coming, because we’ve seen them done in other (better) films before. It took four writers to put together this clichéd and disjointed story? Yikes, Hollywood. That’s just sad. 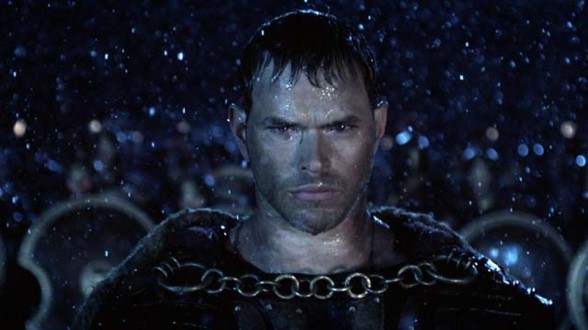 The characters suck even harder than the story does. Hercules has no real character arc and he certainly has no flaws. He’s just abs incarnate, being right about everything and being able to overcome anything. Ironically, I began to loathe him as a character because it felt like all he cared about was his love. Liberating his kingdom from tyranny seemed like a side thought. His worst moment has to be when the villain orders two of his closest allies executed, but he only shows any emotion when immediately after, he’s reminded that his girlfriend is about to marry his douchebag brother. When I reviewed “47 Ronin” and said Keanu Reeves is boring when playing a boring role, I had no idea that a cesspool of anti-charisma could exist within the form of Kellan Lutz. He has the same facial expression all the time, showcases no personality and his line reading was flat. Was it just me or at times did it feel like his voice was being dubbed over too? He’s just so boring. Gaia Weiss, his love interest, oversells her emotions to where I started cracking up. Her facial expressions were often hilarious, especially during the lovey scenes. Her character also only seems interested in being with Hercules, either failing to realize everything that’s going on around her or maybe she just didn’t care. Everyone else just sucks, although to be fair, they have some of the worst possible dialogue to work with. The writers are trying to be old fashioned with the linguistics, but instead of seeming authentic (which it wasn’t) it was just corny as hell. Scott Adkins thankfully rocked in every scene he’s in. He has a lot of presence, charisma and he does sell his dialogue with the right emotions. He is so good that it makes everyone else he shares the screen with seem that much more terrible. But the acting is usually bad overall and the characters don’t have enough screen-time to be interesting or sympathetic. In some cases, important aspects about them aren’t revealed until late in the movie, like how the brother has an inferiority complex stemming from Hercules being the favorite of their Mother. Why should we care? He has like one scene with his Mom around the HALF WAY POINT. Too little, too late. “The Legend of Hercules” simply manages its time horrendously. It should’ve cut out unnecessary characters and subplots and focused on the interesting stuff. Instead, it’s like it’s trying to cram in as many clichés as possible.

What about the action? After all, it’s spectacle that drives this genre…Every once in awhile, there will be a cool visual. Renny Harlin might be a hack when it comes to storytelling, but the man does have an eye for…eye candy…Unfortunately, I guess he lacked the resources to realize his epic vision, because the CGI sucks. Audience members giggled when a ‘lion’ shows up. I nearly urinated myself whenever Hercules would start using ‘super human’ abilities, because the special effects look so amateurish. The actors, their props and the few practical effects never meshed well with the post production work. There are a few really cool fight scenes…both involving Scott Adkins (WHY WASN’T HE THE LEAD?!)..but the remainder of the battle sequences are….*sigh*….I feel like I say this a lot: too reliant on shaky camerawork and editing which is too tight. There are a lot of moments where I couldn’t even make out who is who. Finally, I kept noticing the stuntman making mistakes and the weapons often bent in impossible angles (because they’re fake). So unless Scott Adkins was doing the pwning, I couldn’t get behind any of the action sequences. At times, Renny Harlin just gets really lazy too. Whenever a ‘goddess’ appears, you’d think that she’d make a grand entrance, or at least look magnificent (like “Immortals“). How does she make her appearance in “The Legend of Hercules“? She just walks on screen, with little build up. Furthermore, she looks oddly plain, with some facial markings signifying her godhood. That’s not very godly, but it is pretty dull…So in a way, she meshes perfectly within the style and tone of “The Legend of Hercules“.

“The Legend of Hercules” is just bad. It fails on every level. It was not entertaining because the action scenes usually were weak, relying too much on shitty special effects. The characters come across as selfish douchebags who never grow, although part of the problem is that the movie doesn’t see its primary characters as selfish douchebags. We’re supposed to see them as heroic, but the writers are so incompetent that they couldn’t even convey that correctly. If I was lucky, I would be blessed with amusingly bad acting…But Kellan Lutz was so boring that he sucked whatever unintentional comedy could be enjoyed from every scene he’s in. Dwayne Johnson, who shall play the same role later this year, has more charisma in his left nut. There’s too much (clichéd) story, too much boring romance…and yet not enough to give the plot a smooth flow. Rushing through the story is not the same thing as a fast pace. It hurries to the finish line, but like an obese turtle, its fastest is still brutally slow. “The Legend of Hercules” commits the absolute worst sin of Cinema: It bored me. Still, it just proves that Scott Adkins deserves to be attached to bigger projects. MAKE IT HAPPEN, HOLLYWOOD!

Overall: “The Legend of Hercules” sucks. Don’t watch it.