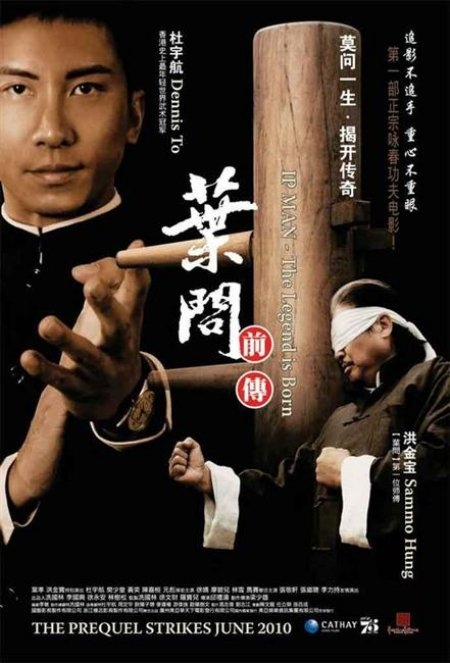 Plot: Taking place before Yip Man (Yu-Hang To; AKA Dennis To) becomes the legendary instructor of Wing Chun, we learn of his (mostly fictional) origins as he endures racism, a love triangle, betrayal, strife between two sects of his art and those pesky Japanese. Luckily, in kung fu movies, martial arts resolves everything!

Whether “The Legend is Born: Ip Man” works or fails, I have to give it credit where credit is due. I’ve seen knock-offs before. I’ve seen blatant knock-offs. But I’ve also seen knock-offs that demand a faint air of respectability. Rarely do the two coincide. The movie “The Legend is Born: Ip Man” dares to (obviously) exploit is “Ip Man” (AKA: Yip Man), which shot Donnie Yen and his director into A-list stardom. It is about as shameless as one would expect. They re-use some of the same actors and even cast a martial artist who looks like Donnie Yen. Hell, in some markets it’s even known as “Ip Man 3: The Legend is Born“. Yet it is also a fairly well made film that opts to do its own thing. “The Legend is Born: Ip Man” almost feels like an authentic prequel. But don’t get your hopes up either because while “Ip Man” and “Ip Man 2” are genre classics, this movie forgot to have a strong script along with the action. Actually, I think it just forgot to have a script in general…

But just like how horror films can survive an awful script by having exceptional direction, martial arts movies can survive shoddy screenplays by having exceptional choreography, as long as the director doesn’t screw it up. Luckily, the director didn’t screw it up. What I liked the most about the choreography is that it is diverse. There are many different kinds of hand strikes, high kicks, tactics, acrobatics and even grapples. They mesh together very well, quickly establishing a rhythm that it maintains consistently. The story makes sure to give us one-one-one fights, one-against-many brawls and even some weapon-work. The director manages to include the sets and props in some of the fights, which is always a nice touch. The film boasts some rarely seen techniques from the Wing Chun archives, which is certainly interesting. That won’t make these fights great, but it is a nice gimmick that assists the already solid choreography. There is nothing groundbreaking about any of this. Donnie Yen’s films were superior, but that’s only because those films had amazing fights. The lighting, cinematography and direction all coincide nicely with the choreography, so everything works together effectively. Granted, the final fight is kind of lame compared to the battle that proceeded it…But I suspect that they were referencing “Enter the Dragon“. 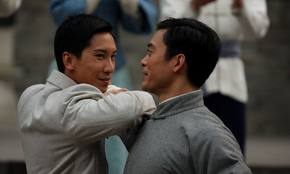 The films primary failure is that it has no real plot. Instead, the bulk of the film is comprised of many (useless) subplots. For example, Ip Man goes to Hong Kong and trains with Leung Bik (Ip Chun, the real life son of the titular character), whose interpretation of Wing Chun is controversial. This causes strife between Man and Ng Chung-sok (Baio Yuen), the current master of Man’s martial arts school. This is actually a pretty engaging concept. But this subplot is resolved almost immediately, making the 20 minutes or so spent with it rather pointless. Yet at least up until this point, the movie has been enjoyable. I dug the theme, even if it already is playing loose with real history and the kung fu was pretty enjoyable and consistent. It was being a breezy, entertaining kung fu movie.

Unfortunately, subsequent subplots range from silly to boring. Ip Man falls in love with Cheung Wing-shing (Huang Yi), and she is just as smitten. But his childhood friend, Lee Mei-wai (Rose Chan) is also in love with him AND Man’s adopted brother, Ip Tin Chi (Siu-Wong Fan) is in love with Lee Mei-wai. Besides my obvious disdain of awkward love triangles that chips away from time dedicated to the fights and the fact that the romance is traditionally shallow, none of this has any real bearing on the plot. Cheung Wing-shing never is a damsel in distress, nor is she even included in the finale. Lee Mei-wai is more present but once it becomes apparent that Man loves her rival, their interactions are minimal. The dynamic between Man and Tin Chi are pretty interesting, but the love triangle causes no friction between them. The movie gets really emotional with Man and Tin Chi near the end, but it feels forced because their screen-time together was startlingly minimal during the middle block. You could argue that it’s just trying to be about Ip Man himself and all of these subplots are just part of exploring his character. The problem with this statement is that the movie focuses too much on other peoples dilemmas, which undermines this claim. Furthermore, after the first 20-30 minutes, Man becomes a static character. While all of this is going on, those pesky Japanese caricatures are showing up and doing evil things that you expect Japanese people to do in these movies.

The film isn’t THAT racist compared to Donnie Yen’s movies, where all Japanese people are evil and cannot learn kung fu because they are evil. But at least Japanese fighters were more-or-less competent in that film. Here, we see Ip Man fighting off a bunch of samurai/ninja with swords using only a few pieces of wood. To be fair, it’s possible that the Japanese were pretty good fighters, but Ip Man is just invincible by the end of the movie. Whereas Donnie Yen’s interpretation of the character was much more vulnerable and he wasn’t necessarily the strongest fighter in the universe, To’s Ip Man never seems to have much of a challenge. Once he stops developing, he’s unbeatable and we never feel any of the enemies are legitimate threats. In fact, the Japanese villains are glaringly flat. They never win a fight without sheer numbers or resorting to petty tactics. They’re villainous, but never too detestable, which makes them boring. They’re just there because for some reason, Ip Man always has to beat up the Japanese. 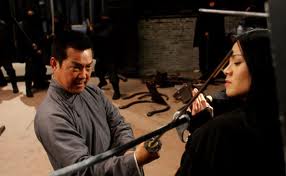 But alas, “The Legend is Born: Ip Man” is not necessarily a bad movie. When it works, it works pretty well. For one, director Herman Yau does a pretty good job at wrangling emotion out of nothing. He does emulate the visual style pretty well and I did find some of the musical compositions to be rather inspired. Not bad for the guy who co-directed “The Untold Story“. While there is nothing groundbreaking about the acting, I did like the cast. Dennis To isn’t Donnie Yen, but he was acceptable, and recaptured that dignified presence of the character. He could use use a little more charisma though. Siu-Wong Fan (Tin Chi) probably has the most to do and he does it well. It was nice seeing Yuen Biao in a strong supporting role and even if Sammo Hung (Sifu Chan) only has a cameo, that was nice too. The women are acceptable and it was interesting seeing Ip Chun. My issue was only with the script, not the actors, director or choreographers.

Another thing about “The Legend is Born: Ip Man” that might make it worth watching is how it references other big stars. Leung Bik’s teachings share the same philosophy that Bruce Lee popularized, some plot devices are lifted from a few of Jet Li’s movies and one of the earlier battles blatantly homages the works of Jackie Chan (mugging included). I don’t even need to bring up Donnie Yen. With the appearances of Sammo Hung and Yuen Biao added to that, there are connections to a lot of the big kung fu stars. Despite its shameful marketing campaign, at least the movie itself was okay. It provided stellar fight sequences, had some nice direction and a few really good dramatic moments. It’s just not on par with the previous films, mainly because it has no plot. The script is an utter mess, but with this genre, the script can easily be redeemed by the execution. “The Legend is Born: Ip Man” had more-than-acceptable execution. On a final note, had “Yip Man” been made in the 90’s, Jet Li probably would’ve played the titular character. Donnie Yen likely would’ve starred in “The Legend is Born: Ip Man”. Just thinking about that makes me laugh in amusement.

Note: I’m still not sure whether I should refer to him or the movie as Yip Man or Ip Man.

Violence: Rated PG-13 worthy. Nothing too gruesome, just some beatings.

Overall: “The Legend is Born: Ip Man” is worth watching if you liked the other films, but don’t expect it to be in the same class as them.