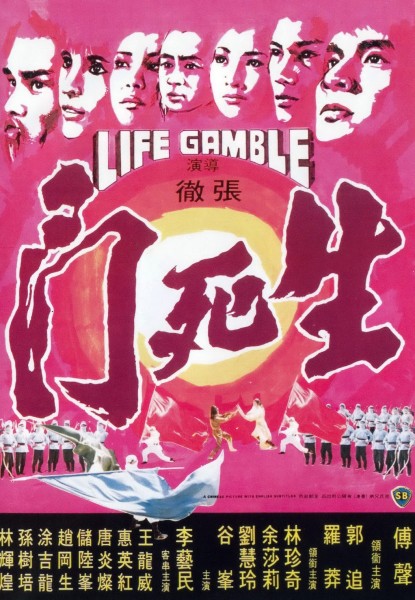 Plot: Instead of selling the stolen Jade heirloom in order to split the earnings between them, a handful of skilled and devious warriors choose to have an elaborate gambling match- the winner getting the prize. Each individual conspires as the date leading to the ‘game’ comes up, making new allies and spilling blood in order to ensure their victory.

Even though I am fond of the kung fu genre, I’ve always disliked how the majority of kung fu flicks from the 70’s all resembled each-other. They all share the same plots, character types and I could swear that they are recycling the same sets over and over again. Even the better examples become difficult to remember, because quality is the only thing that sets them apart from the masses. This usually would be acceptable, as that’s how the slasher genre survived during the 80’s, except ‘good fight choreography’ was very common during the 70’s- which is why it’s often regarded as the golden age of kung fu. But even though I’ve seen many of these so called classics, I can’t often tell which one is which. So I’m always affectionate towards examples of this genre which are unique. “Life Gamble” holds a special place in my heart because even though it provides a handful of cool fight scenes, I was more interested in everything else. It has an intriguing story, filled with suspense, intrigue and daring unpredictability. It boasts stunning production values when compared to its contemporaries, with sharper cinematography and experimental filming techniques. It won me over simply because it’s different when placed up against everything else that the genre was giving us at the time, even if it doesn’t provide the most action or the best choreography.

I will admit that it took some time figuring out who was who and what side who was on. Each of the characters have distinct personalities and wear vastly different attire, so I could tell who they were by looking at them, but the name dropping was difficult to keep track of. “Life Gamble” contains A LOT of characters, including the four criminals who get the jade, the victims who want it back, the law enforcement, a benevolent blacksmith, the King of Gambling, all of the above characters henchman and a handful of other characters who want a piece of the riches, so there were too many names for me to remember. “Life Gamble” has snappier and more quick witted dialogue compared to the majority of kung fu flicks, where spoken lines tend to have a slower delivery and are a bit redundant. Since I was watching the subbed version, my eyes burned out pretty quickly. Once I got used to it, however, I had little-to-no difficulty figuring out what was going on. Many recognizable faces, from the Venom Mob to Fu Sheng play these characters, but the female roles were the most compelling. Usually the kung fu ladies are either written as if they’re men or are static love interests, but these gals seemed to have the best dialogue and are much more intelligent than their male counterparts. Every character manages to stand out though, in spite of the huge cast, and they are interesting because most of them aren’t traditional villains or heroes. The bad guys have moments where you like or sympathize with them, whereas the good guys can be violent bullies. In fact, considering all the back-stabbing and redemptive turns, by the end of the movie it becomes difficult to tell who the heroes and villains really are. Even the most noble character is shown to be ruthless and cold. This made the movie unpredictable, which is highly important for a flick that deals with so much intrigue. Hell, I even struggled with figuring out who the primary protagonist was. By the half way point, there are multiple contenders for that role. Every time I thought I had it pinned down, the focus would shift to someone else. Anyone can die and anyone can come out on top. “Life Gamble” really does have a superb story, which is a rarity for this kind of flick.

“Life Gamble” has to have one of the best DVD transfers ever given to a 1970’s kung fu flick, being devoid of even a flicker of grain, which is important because a lot of effort was put into the set design. The locations are all highly detailed and stunningly beautiful. The director uses a lot of highly advanced camera techniques, although the editing is occasionally choppy. The dramatic musical zingers, which feel like they were lifted out of a TV Soap Opera, were a little cheesy- but they did made me smile more than groan. Nevertheless, “Life Gamble” puts a lot more effort into the actual filmmaking, making this arguably the most sophisticated effort of Cheng Cheh. This director was primarily known for his professional minimalism, but “Life Gamble” is so polished that I would’ve guessed it was directed by Yuen Chor (“The Magic Blade“) or King Hu (“A Touch of Zen“) The fight scenes are good, but I will concede that they’re overshadowed by the plot and direction. I was often more interested in the weapon design and the gimmicks surrounding the fights. Every fighter has their own ‘style’, some being more outlandish than others. But the weapons themselves are incredibly creative, but also having a practical function, like magnetized knives. That’s just awesome.

If you want nonstop action, “Life Gamble” might not be for you. The majority of the first half is very talky, focusing on developing the various characters, their schemes, their alliances and their enemies. Every once in awhile combat will take the center stage, but the fights usually don’t last long. During the second half, then everybody starts kung fu fighting, but even then it’s merely a stronger balance between story and action. “Life Gamble” is more about its story and the clusterf@ck of betrayals. It’s more about showing off impressive cinematography, prop and set design and clever dialogue. The fights, when they occur, are good, but you should treat them as a dessert instead of the main meal. “Life Gamble” is great, in my opinion, but you need to be aware of the kind of movie it is before you actually watch it.

Nudity: None, but there is more sexuality than is found in most kung fu flicks.

Overall: “Life Gamble” is a kung fu film where the kung fu lets the story and visuals do all of the fighting for it. It works because it’s an exceptional feature.