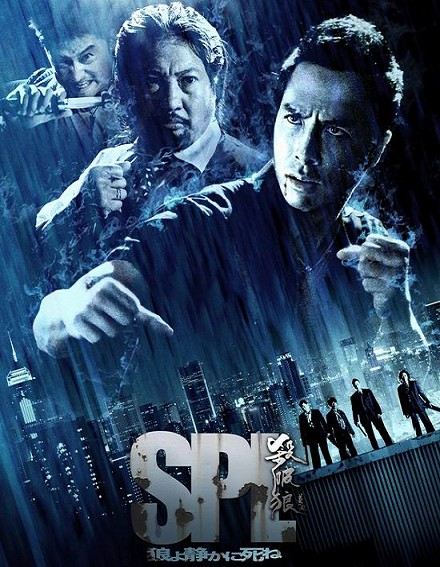 Plot: When Inspector Chan (Simon Yam) discovers he’s dying from a brain tumor, he decides he will do anything to bring down Crime Lord Wong Po (Sammo Hung), even if it means breaking the law. His vendetta is complicated when Inspector Ma Kwun (Donnie Yen), a badass with his own interpretation of the law, joins his team and doesn’t necessarily agree with Chan’s actions.

There’s something incredibly annoying about taking Hong Kong films and changing their original titles into something so generic that you almost expect it to star Steven Seagal. “Kill Zone”? That doesn’t even make any sense within the context of the film. But I can almost sympathize with them this time around, as the Hong Kong title (S.P.L: Sha Po Lang), is a bit too cryptic for those who don’t understand the culture. Oh well, at least it wasn’t one of those cases where they took a perfectly fine title like “A Battle of Wits” and changed it into “Battle of the Warriors”…Might as well call it “Fighting Fighters“… Anyway, enough about my rants regarding the lazy titling of movies! “Kill Zone” was the film which made Donnie Yen and Sammo Hung relevant again…in Hong Kong, anyway. It made quite a bit of money and achieved critical acclaim, although it’s success seems almost insignificant when compared to their later “Yip Man“, . Looking back on this movie, I’m a little confused as to why it’s held in such high regard. Sure, it’s a pretty good film, but is it THAT good? I thought it was kind of…messy…

Apparently, “Kill Zone” was conceived as a cop drama. But when Donnie Yen was brought on-board, the filmmakers decided they wanted to exploit his martial arts fame, so added more elaborate fight scenes within the script. This back-story is important to remember because it shows in the final product. “Kill Zone” has too much gratuitous action to be considered a great cop or crime drama, but it doesn’t have enough action to please the martial arts fanbase. What makes this complicated is that I have to weigh this against the fact that the fight scenes are incredible and as emotionally manipulative as it could be, I was invested in what was going on. Much like the majority of Wilson Yip’s movies, I find myself frustrated because his talent as a storyteller and visual artist is noticeable, but it always presents itself in flawed films. Amusingly, “Flash Point” (another Wilson Yip/Donnie Yen feature) suffers from a lot of the same problems and that was originally intended to be a prequel to “Kill Zone”. So the movie, in my opinion, has greatness within it, but it’s not great as a whole. 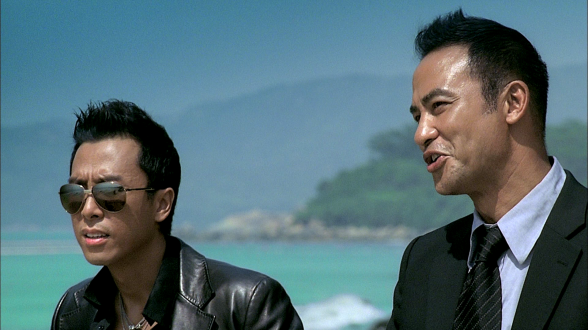 Let’s discuss “Kill Zone” as a drama. The cast is rather large, but the writers did a good job at giving each of the characters their own back-story and personalities without spending too much time them. Chan becomes increasingly disillusioned with himself as he continuously lets people down and his sudden illness adds a sense of urgency to his actions. He’s a very morally ambiguous character and eventually he does cross the line, even if his intentions are noble. On the other hand, you have the antagonist (Wong Po), who is your typical villain…except he seems to have a soft spot for kids and he adores his family. Finally we have Ma Kwun, a younger Inspector whose reputation went wild when he punched a guy so hard that he became a simpleton. The actors all have quite a bit to do and they are excellent within their roles. This was before Yen became respected as an ‘actor’, so he was probably the biggest surprise for many. Sammo Hung also threw Hong Kong audiences off guard with his rather ruthless character. The supporting players also have their own subplots going on, so with all of this meaty material, “Kill Zone” should be ripe with drama…right? RIGHT!? Well, yes, but it’s complicated.

The problem is that Wilson Yip fumbles all of these great ideas and ends up creating a mess out of the whole project. I criticized “Yip Man” for being racist, but I didn’t feel it was trying to promote racism as much as it was just emphasizing Chinese national pride and accidentally came across as racist in the process. This apparently is a re-occurring weakness of Wilson Yip, as here, I felt like the movie started to justify the morally ambiguous actions of the characters a bit too much. At first, we fear these corrupt cops (and that’s what they are) based on how far they’re willing to take their crusade. But over time, it’s as if the movie wants us to take their side…who cares that they falsify evidence, steal drug money, beat up innocent witnesses and even KILL a suspect in cold blood. Dialogue keeps reminding us that they were really good cops. This is especially distracting when it comes to Donnie Yen’s character. It turns out that he sees his infamous action as a source of shame, as he’s spending his free time bonding with his victim. The point was, even if the bad guy deserved it, Ma Kwun regrets for going too far and in his own way, is trying to make up for what he did. I liked that, but the subplot is sort of thrown out the window once Ma Kwun becomes a little too accepting of what his comrades are doing. People called “Dirty Harry” fascist? “Kill Zone” makes that look like liberal propaganda. But Wilson Yip also just loses track of all these various subplots. Wong Po is given a very humanizing element in the beginning and it’s brought back for the ending, but throughout the bulk of the running-time, it’s sort of forgotten. Same with the goddaughter subplot. Or even the brain tumor subplot. It’s brought up, only to be forgotten until it has to be relevant once more. 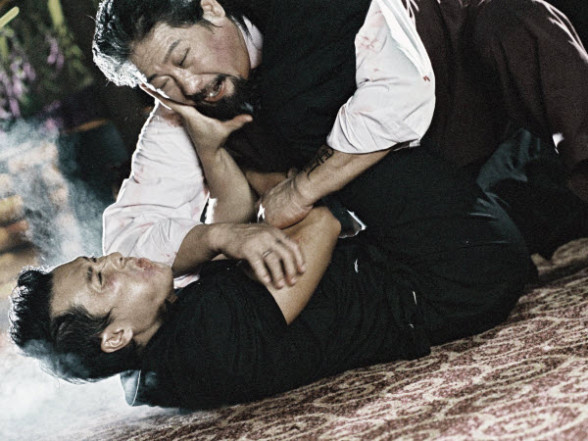 But even though Wilson dropped the ball when it came to telling this story, his direction was very stylish, intense and even moving. Yes, “Kill Zone” is very emotionally manipulative with the music. But he lets the actors act, and their facial expressions and body language emote so much. I ended up feeling the over-the-top music was great and the contrast of sappiness and gritty violence somehow managed to work. When two characters are having emotional moments with their loved ones and are suddenly targeted by an assassin, I found myself getting antsy in my seat. The tension was that nerve wracking. The ending…the beautifully dark, haunting ending…is f@cking poetic. It almost made me angrier at the rest of the movie for failing to utilize its dramatic possibilities correctly just because the ending in itself packs a major punch. As always, there are some arthouse vibes going on as well in regards to its cinematography. Something about the beach scenes reminded me of Johnny To. Very nicely done.

The first real fight scene doesn’t begin until around the 30 minute mark, so for those expecting nonstop action, maybe this isn’t for you…Unless you can be patient. Not counting the quicker conflicts, there are four major martial arts sequences and each of them are spectacular. The highlight is when Donnie Yen does battle with a blade wielding hitman. The choreography contains some jaw dropping, advanced weapon techniques. The little quirks to the battle are what really stand out, however, like when Yen stops an attempted stab, only for the enemy to drop the weapon and catch it with his other hand. This move would re-appear in “Abraham Lincoln: Vampire Hunter”, but here it’s much more fluid and looks like it was done in a single take. Sammo Hung gets to prove he’s still very acrobatic despite appearing to have gained a lot of weight and is like…in his 60’s? Everyone moves incredibly slowly compared to Donnie Yen though. His speedy attacks are truly a sight to behold. The final fight between Yen and Hung is pretty good, making use of the sets, props and their different sizes. They showcase plenty of diverse techniques and everyone seems to be covered in baby powder. So you can see that the hits are authentic. The only downside to the final battle is Yen and Hung would have a much better fight in “Yip Man 2”. So the fact they were able to top this is more impressive than this. 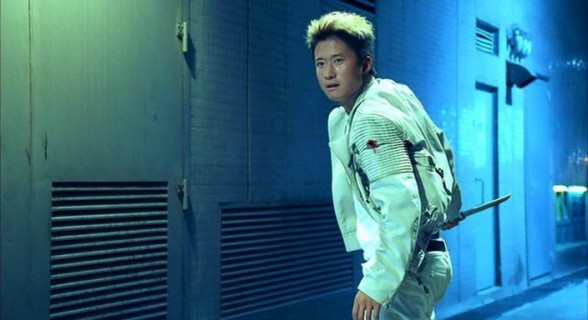 It’s strange because even though the fight scenes are amazing, they almost seem superfluous to the story. To the credit of “Kill Zone”, it usually tries to justify the lack of guns. Either the cop will have to relinquish the weapon or will be unable to draw it before being stabbed in the arm. But still…I just felt they didn’t fit with the rest of the flick. If this was a full blown martial arts movie, I’d be much more accepting, but it’s not. Even worse, the martial arts arguably ate up the screen-time which could’ve been dedicated to fleshing out the drama and allowing certain character decisions to make more sense. But at the same time, I probably wouldn’t watch it without the martial arts and the fight scenes are just SO amazing. I suppose that instead of criticizing “Kill Zone” for failing to reach its full potential, I should instead focus on how it somehow kept me invested despite sacrificing character development for kung fu, while not having enough kung fu. So I’m going to say that “Kill Zone” is a good movie because of its successes, while its failures keep it from being great.

Nudity: You briefly see some breasts during a raid.

Overall: “Kill Zone” is a cop drama that happens to have some (really good) martial arts. As long as you know what kind of movie you’re getting into and don’t like the hype get you too excited, you should enjoy it.