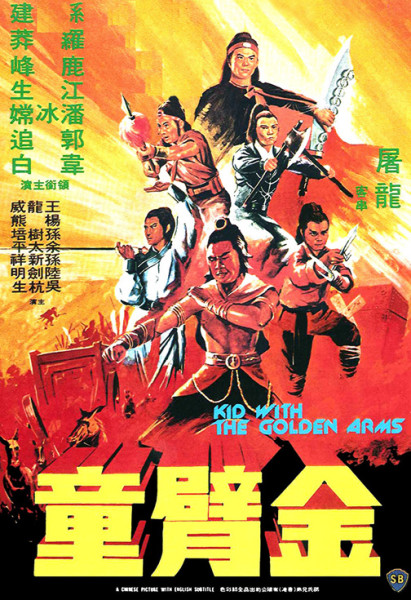 Plot: An escort service (no, not THAT kind of escort service) is hired to escort a shipment of gold, but a deadly gang headed by the titular Golden Arm (Lo Mang) wants to steal it themselves. Lots of fighting ensues.

The Venom Mob were a troupe of martial arts performers whose members had many different specialties, although they were primarily renowned for their acrobatics and weapons skills. They made movies together for about 7 years (1976-83), churning out TWENTY SEVEN motion pictures in that time period. In many ways, their success confuses me. While they weren’t terrible actors, they were incredibly bland, especially compared to the previous megastar, Bruce Lee. While they certainly had talent within the genre, when Jackie Chan broke onto the scene in 1978 (with “Snake in the Eagle’s Shadow” and “Drunken Master”), their brand of choreography seemed sort of old fashioned in comparison. Furthermore, their films had the tendency to resemble all of their other films in terms of plot, characterizations and aesthetics. I’ve watched and reviewed “2 Champions of Shaolin” and “10 Tigers of Kwangtung” and despite their popular reputation, I can’t remember which was which. The purpose of this paragraph isn’t to attack the legendary status of the group, but to reinforce my surprise at how much I liked “The Kid With the Golden Arm”.

The first thing “The Kid with the Golden Arm” does right is provide lots and lots of fight scenes for us to chew on. The earlier fights are rather sluggish and dull, but as time moves along, they become faster and more advanced. While the fight choreography pales in comparison to….lets say what Sammo Hung (“The Magnificent Butcher“, which came out that same year) could do, the actors are all insanely acrobatic. They insert flips, cartwheels and other crazy shenanigans in their battles, even when it seems pointless for them to do so. One of my favorite parts is when a random baddy tries to spear the protagonist (Kuo Chui), who casually evades it using a smooth cartwheel. That was so cool! The characters each have their own style of fighting, some being grounded in reality and others being hilariously gimmicky. You have hand-to-hand fighters, a spear master, axe masters, a dude who uses one of those deadly fans *although his main gimmick is his armor), a dude with a brass bowl on his head…Pretty crazy stuff, but these fights were all diverse for it. “The Kid with the Golden Arm” is fast paced because it never goes on too long without a fight occurring and the fighting itself is fast paced and exciting. Sure, once again, Jackie Chan and Sammo Hung were already doing better work. But that doesn’t mean the Venom Mob couldn’t own in the stylistic combat department either. I might’ve used the term ‘old fashioned’ in a derogatory manner earlier, but I feel the need to alter my words into saying the Venom Mob is ‘old school’.

Cheh Chang’s direction is pretty unremarkable, although the only movie I’ve seen of his where the visual style really stood out was “Heaven and Hell” and I’m pretty sure drugs were involved in that production. Chang is a minimalist, letting the choreography, action and dialogue hold its own weight. His job is to just stay out of the way and that makes him far superior than most modern day action directors. These days, those same fights would be accompanied by tight editing, jittery camerawork and too many close-ups. The sets don’t look very authentic, as they use stages in place of actual forests, but if you’re familiar with this genre then you should expect that. He chose to make the combat rather gory and sometimes the kills even made me cringe, such as when a dude gets a spear shoved up his rear. Yikes! The music was hilarious, a mix-up of different styles and genres. The score can range from chilling to goofy to romantic. I wouldn’t be surprised if they stole the soundtracks from horror flicks, comedies and romances. But still, It’s pretty good stuff. Many might find it to be out-of-place and that would be a valid complaint, but I thought it was endearingly eccentric.

My biggest surprise was how engaging the story was. The script has its flaws, although I will concede that I’m using the term ‘flaw’ liberally. If I had anything to complain about, it’s that the movie has the tendency to drop many different names to where it’s difficult to tell who is who. That is less of a flaw and more me being a dumb foreigner. But I also didn’t like the implications of the romance. It was unnecessary and didn’t go anywhere. Luckily, it only took up a single scene so I could easily forgive that little issue. But I liked how the plot was shrouded in mystery. On the surface, it’s just about good guys escorting a shipment of gold and fighting the villains. I liked how both sides were more-or-less equal, with important characters dying from both sides at various points in the film. But then you have the villains mysteriously knowing where the heroes will end up, laying unique traps which the good guys have to evade. When characters start dying mysteriously and it appears Golden Arm’s gang had nothing to do with it, my mind was actively working trying to solve the mystery. I did correctly figure out where it was going, but I was invested and that was what mattered. Finally, there would be unique little quirks which would benefit the script. Like how one hero is kind of an asshole, wanting to slay the man who saved him just because his reputation was tarnished for relying on someone elses help. Or what about the ending? I can’t spoil it, but a sudden return of another character actually threw me off guard.

“The Kid with the Golden Arm” isn’t universally loved by the masses or even fans of the genre, but us kung fu buffs tend to like it. With the exception of Kuo Chui, who might be trying to imitate Jackie Chan, the cast doesn’t showcase much personality. They act very serious and that is the extent of their characterization. Luckily, the characters themselves are fairly memorable, even if it’s just because of their fighting gimmicks. But I thought “The Kid with the Golden Arm” was one of the Venom Mob’s better films because it emphasized the story more than most of their efforts did, while not taking away from the action. Characters have a fight scene, then have a scene focusing on the plot, then fight again and the process continues. The characters kept my attention, the story was fairly unique compared to most 70’s kung fu flicks and there’s a lot of action which happens to be very well choreographed, so why wouldn’t I adore “The Kid with the Golden Arm“?

Overall: “The Kid with the Golden Arm” is an exceptional kung fu flick from the Venom Mob. If you’re a fan of this genre, watch it for sure. If you’re not, this wouldn’t be a bad way to start things, but I can think of many other flicks you probably should check out first.