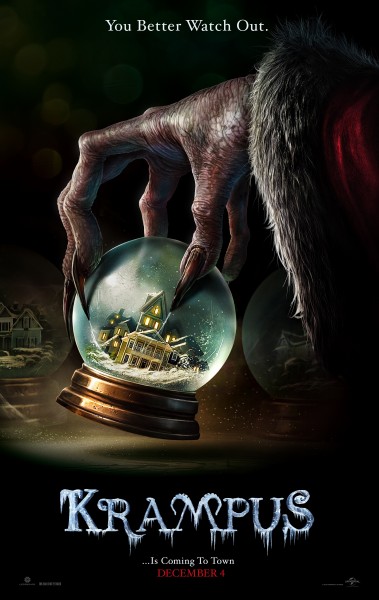 Plot: Max (Emjay Anthony) has lost his Christmas spirit after spending the holidays with his dysfunctional and often volatile family. Unfortunately for him, that puts him on the naughty list of Krampus, the evil version of Santa Claus who brings terror to the holidays. Unable to flee because of a blizzard, the family must unite and fight for their lives.

I hadn’t even heard of “Krampus” when I first saw the trailer, which instantly made me erect with Holiday cheer! I loved how the aforementioned trailer begins as a wholesome family Christmas story with implications that it’s going to subvert our expectations and become a raunchy comedy…only for the terror to start and it all looked amazing. My excitement turned orgasmic when I learned that Michael Dougherty was the director, as he had previously wowed me with “Trick ‘r Treat” and he claimed that “Krampus” would be a spiritual sequel of sorts. Unfortunately, just as I was about to burst in pure bliss, my enthusiasm went limp when I saw the PG-13 rating. Now I don’t believe that Horror films have to be Rated R, but “Krampus” looked liked the kind of creature feature that would wear a hard R rating with pride…I desperately stroked my hope with reminders of “Poltergeist“, “Tremors” and “Gremlins“, all non-R flicks that are regarded as classics, but the passion was gone and I had to be consoled that it happens to all guys…However, I treated my erectile dysfunction with a trip to the doctor and suddenly I could perform again! Er, wait, I was talking about the movie…”Krampus” is a thoroughly entertaining experience, giving you that warm and fuzzy feeling you can only experience when you see a giant jack-in-the-box eating children. There are imperfections and I think it could’ve been funnier and scarier, but I still had a lot of fun.

The biggest concern surrounding “Krampus” was that it would be sanitized in the editing room, but I suspect that the PG-13 rating was planned at least during production, if not from the beginning. Strangely, the PG-13 rating only became distracting when a cast would use bait-and-switch profanity. There is one really good F-bomb, but multiple times they would say something like “ClusterF” or “Motherfricker” and I found myself wondering why they needed those at all. Either say F@ck or don’t, as the PG-13 variations of the word only draw attention to the rating. However, I never felt like this needed to be gorier. In fact, “Krampus” pushes the boundaries of PG-13 very far, as children are in peril and…some F-up shit happens that I was not expecting. If the ‘kills’ were more violent, I think that would’ve only made “Krampus” mean-spirited. The attacks are still shocking in their own way, as we see murderous gingerbread men fire a nail gun into someones leg, a woman get bitten by a rabid Teddy Bear and these moments made me cringe. But “Krampus” is still a horror-comedy and it really pushes a morbid sense of fun onto its audience. When a jump scare occurs, you’re supposed to flinch, maybe scream, but also laugh at the same time. I won’t call “Krampus” campy, but it obviously knows not to take itself too seriously, making the mayhem more entertaining than disturbing. Yet it also doesn’t take itself too lightly and there is a surprising amount of gravitas to the horror, where you do feel bad for the family and do experience tension because of this. I also thought the characters were surprisingly well written, even though they could also be annoying. They’ve developed plenty of bad habits, but the story gradually pulls back their negativity and show them to be decent people. “Krampus” does have a heart, hiding beneath the grotesque spectacle and tension breaking laughter. 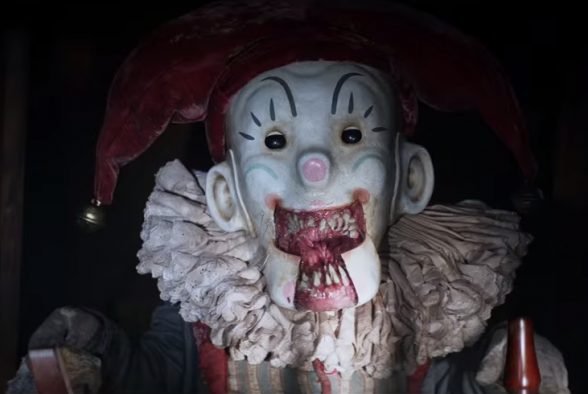 “Krampus” also benefits from some excellent production values. Considering how the genre currently prefers low budgeted, subtle brands of horror, it’s nice to see one with surprisingly elaborate set pieces. I love the Blizzardy exteriors and the feeling of isolation that the weather creates. I was taken aback with how ambitious it could be, because Krampus doesn’t just terrorize the house…he apparently destroys an entire neighborhood and it was haunting seeing the aftermath of his carnage- while foreshadowing the hell that our protagonists are about to experience themselves. I love the use of lighting, which reinforces the Christmas feel of the movie, evoking merriment and nostalgia while having its own sinister vibe (excellent cinematography and direction!). Just as “Trick ‘r Treat” fleshed out its Halloween-themed atmosphere, “Krampus” is filled with Christmas imagery and develops its warped visual style around that. The stop motion animation flash back was a creative touch as well, adding to the films twisted personality. Some have complained that Krampus (the character) was underutilized in his own movie, but I personally didn’t have an issue with this, as I found the gift-themed monsters to be awesome themselves. The designs are all creatively freaky and they are brought to life using…*gasps in pleasure* advanced puppetry effects and lots of old school techniques that I miss to death. The only visuals I disliked were those CGI Gingerbread Men, as they felt a little out-of-place- and weren’t voiced by Gary Busy. I wasn’t crazy about the Elves either, but only because they become the focus during the finale and just aren’t as interesting as the gift-themed monsters. They still are cool enough, but feel like a step down compared to the Jack-in-the-Box monster (my favorite) or the Teddy Bear (“Demonic Toys” reference?). But back to Krampus himself, he also looks really cool and scary. His introduction in particular was nail biting, although there is enough strangeness to his appearance to keep the tone from becoming too dark. I was fine with how he was used for a few reasons. The first is his lack of action kept him from becoming a generic Slasher villain and the emphasis on his demonic toys tied into the the ‘evil Santa’ concept. The second is from a production perspective, as  the special effect was so elaborate that it wouldn’t be very mobile.

So I really enjoyed “Krampus“, even though I can’t bring myself to call it a classic. I thought the humor was consistently amusing and the cast did a good job at balancing comedic timing with fear and drama. Everyone had chemistry, so their interactions were enjoyable. But I won’t say that “Krampus” is outright hilarious. I often chuckled and always had a smile, but I doubt will remember any of the funny lines or comedic situations in the long run. I also didn’t think “Krampus” was terrifying, even though it was often startling, creepy, suspenseful and sometimes even disturbing. There are a few scary parts though. There is a segment during the middle block where I felt like the scares were becoming a bit repetitive, although the finale thankfully does do something different. How many times can you rely on the same jump scare with the SAME monsters? Overall, I’d say “Krampus” is fast paced, but there was about 5 minutes where it seemed like the movie was coasting on its past successes in the fright department. Yet I do want to emphasize that I really did enjoy myself. “Krampus” stands out in so many ways, being completely different from current horror trends. These days, nothing bores me more than uniformity, which unfortunately tends to plague the genre more often than not. I also have to admit that I loved the ending, which combined two stale cliches and somehow made them interesting. Will “Krampus” develop the same following as “Trick ‘r Treat“? Or will it go down as a classic horror-comedy like “Tremors“? I don’t know. I didn’t like it quite as much as those, but I did still like it and hopefully you give it a chance and like it too!

If not, Krampus will come down your chimney and spread holiday terror. Of course, if you see the movie, I suppose you’d be running into Krampus anyway…In other words, you’re fucked.

Violence: PG-13, but there are some…alarming moments.

Overall: “Krampus” is an enjoyable horror-comedy, sometimes even being exceptional! I don’t think it’s the best of its kind, but I still liked it.