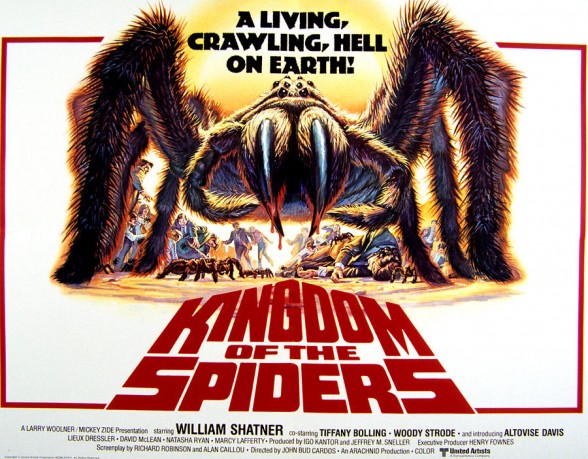 Plot: Tarantulas start changing their lifestyles, banding together and deciding to feed on much larger prey. Unfortunately for a small town in Arizona, they develop a taste for human flesh.

“Kingdom of the Spiders” is one of those ‘nature goes rampaging on humanity’ movies that were pretty popular during the late 70’s and early 80’s. Borrowing mostly from “The Birds” and “Jaws”, the story is rather familiar. A hardened local authority figure teams up with a city slicking expert in order to stop a predator, but their quest is troublesome thanks to the corrupt Mayor. In this case, the menace is the spider. These little bastards seem to be everywhere, including the cockpits of a plane, the back seats of cars or anywhere that benefits the plot. They can even cut the power! Also, tarantulas have apparently gained the ability to spin webs. But little do they know that we have William F’ing Shatner to defend us. Ah, “Kingdom of the Spiders”, you might be crap. But you’re good crap. Now come here and give me kisses!

The bizarre thing about “Kingdom of the Spiders” is that during the first 30 minutes, the movie kind of sucks. I was distracted by the alarmingly low production values (the audio…). It seemed like the majority of the funds went into hiring the Shat, who does at least deliver the best performance. Bolling is also acceptable, but the rest of the actors range from too over-the-top (the annoying RV couple) to embarrassingly stiff (Woody Strode; who was a MUCH better actor than this). I could’ve gone along with it, but “Kingdom of the Spiders” was intent on forcing awkward interactions down my throat. If it wasn’t the unnecessary, awkward love triangle. Then it was the snooty city girl looking down on the Shat during her introduction, or the weird attempts at comic relief. I wasn’t sure if I was watching a lame comedy or a horror movie, because even the attempted ‘scares’ were laughable. 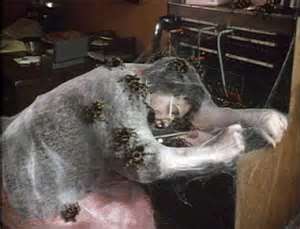 The film opens with a “Jaws”-esque POV shot, where the spiders claim their first victim…A COW! NOT THE POOR COW! The set-up of spiders stalking the cow is silly enough, but the freeze frame and the cow screaching was funnier than any of the intentional attempts at comedy. There’s also the gas station bit, where a single tarantula chases an unsuspecting guy, but is stopped when the door closes. Okay, that’s not quite as golden as the cow-suspense, but that’s pretty amusing too. Maybe this was the intent? Perhaps “Kingdom of the Spiders” was aiming to get you to laugh at it, which meant that the audience would technically be laughing with it, if that was the goal? I’m not sure, but that is a possibility.

Either I started to get used to the badness, or the director had found a way to make the apparent faults more endearing. The characters burn a spider hill, but a few spiders are seen escaping and somehow this breeds millions of them. A this point, the spiders start appearing everywhere. The main problem with the ‘scares’ is that they rely a lot on the actors now. A character would realize that spiders are crawling on them and the subsequent reactions are hilarious. I’m not sure what’s funnier, the guy in the plane who screams like a girl, or robotic Woody Strode trying to convey fear. Actually, scratch that, the best part has to be when a Mother realizes that her daughter is in peril. She screams “my baby!”, grabs a broom and goes to town. It’s supposed to be a terrifying moment, but I was giggling. Yet despite everything, I have to admit that I was enjoying myself by this point. “Kingdom of the Spiders” had gone from bad to watchable, if for the wrong reasons. 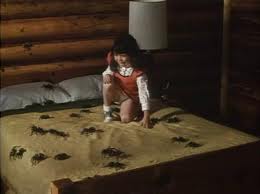 But little did I know that the finale would be anything but funny. It would be TERRIFYING! You see, I have arachnophobia. Actually, I have a fear of insects in general, but spiders probably creep me out the most. Watching hundreds of these fuckers storm the town, cover houses, vehicles and everything in sight is enough to send chills down my spine. But those shots of webbed victims being covered with spiders are genuinely unsettling. The “Night of the Living Dead”-esque finale has the cast boarding up a little house. But they are always finding ‘something’ wrong with their plans and the end result was a riveting, nail biting confrontation. The legendary final shot might be a little cheesy, but it’s still surprisingly effective in a “Twilight Zone” kind of way. It’s been three days since I watched the movie, and it’s still fresh in my mind.

Believe it or not, there is a certain amount of intelligence to be found in “Kingdom of the Spiders”. Yes, characters occasionally do ridiculous things and the science is completely fictional, but there are moments of clever subversiveness that is rare among this sub-genre.. Example, the heroine is about to take a shower, but in the foreground, we see a spider crawling around. You expect this to lead into a jump scare, but it’s played in a much different fashion. During the finale, the male half of the annoying RV couple is actually useful. I figured he would freak out and endanger everyone else, but he never does. I started to root for him. The Shat, our manly hero, finds himself in peril and seems genuinely afraid. You expect the love interest to be the one scared out of her mind, needing the hero to save her. But that never really happens. Finally, the badness and high level of cheese almost serve as misdirection. The 3rd act is shockingly ambitious, showing the town being overrun in all its glory, a complete contrast to the cheap looking first half. Furthermore, I found the final act to even be a little scary. This probably was magnified by the fact that I wasn’t expecting it. So I have to say that…I kind of love “Kingdom of the Spiders”. When it fails, it fails masterfully, but those failures end up supporting the strengths. Hurray!

Violence: It could be PG-13 worthy. I will say this, despite my fear of spiders, I was a little bit bothered by the obvious animal cruelty that was happening on the set. You see them get crushed, ran over and worse.

Nudity: You might see a pair of breasts during the shower scene, but the actress could’ve been wearing a skin colored bra. It was hard to tell.

Overall: “Kingdom of the Spiders” is definitely worth a watch IF YOU KNOW WHAT TO EXPECT. Don’t let my final summations be the deciding factor, you must consider how the movie works and whether it is for you.