(Written and Directed by Xan Cassavetes) 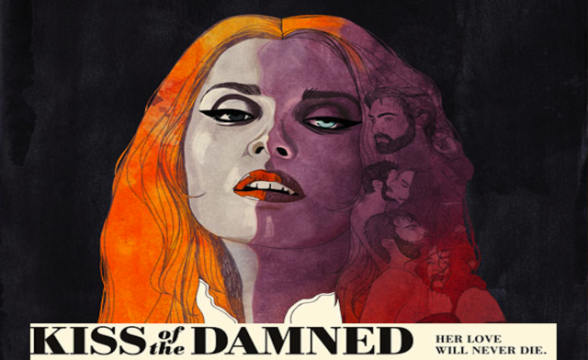 Plot: Djuna (Joséphine de La Baume) is a lonely vampire who finds love when she meets Paolo (Milo Ventimiglia), whom she ultimately turns into a creature of the night. But things get complicated when Djuna’s sister Mimi (Roxane Mesquida) has to stay with them. Turns out Mimi is a bit of a psychopath, even by vampire standards.

Let me begin my review by saying that “Kiss of the Damned” has to have one of the most contrived, bullshit love stories of all time. I HATE ‘love at first glance’ romances, because it’s impossible to love someone you don’t know. That’s lust, but it’s rarely called out as lust. “Twilight” was just as guilty of this sin, but at least the two leads didn’t immediately hook up. Within the first 20 minutes of “Kiss of the Damned”, the two lust birds not only confirm their love for eachother, but Djuna has already told Paolo of her curse and he’s pretty cool with it. Immediately they have sex and she turns him into a vampire, which he is also pretty cool with. I’m not sure what I hated more, their love story or what was building up to their love story. They make eye contact, he hits on her, they go out, they go to her home to have sex, she feels violent urges coming on so kicks him out, he continues to pursue her rather aggressively, she keeps pushing him away and finally she gives in. The problem is these interactions were rather cheesy. Djuna giving into her passion and kissing him deeply, only to change her mind and push him away, was just too overplayed and annoying. Paolo’s pursuit was more creepy than charming, although he’s still not as unsettling as Edward Cullen was. Yet their interactions just set these people up as unstable. Throughout the entire film, I never got any sense as to who these people really are, which is strange because the majority of the screen-time is them talking. Paolo never seems to consider how this will effect his ‘old life’, making him either an insensitive asshole or the most static character imaginable. They don’t even really develop either. The acting is usually good, although some of the line delivery can sound odd, but these characters are just SOOOOO boring. 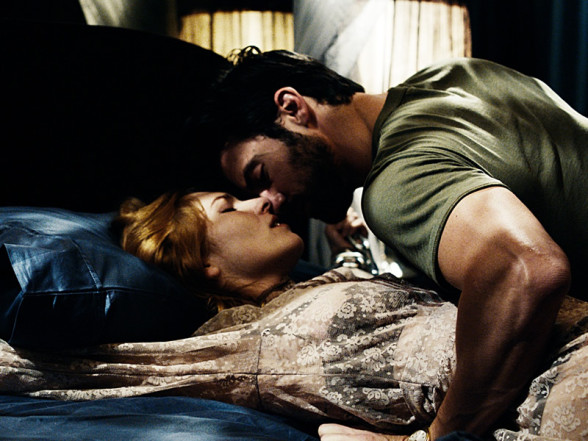 Yet as I said earlier, part of me suspects “Kiss of the Damned” was trying to deconstruct the vampire romance genre… By the end of the movie, Paolo and Djuna have betrayed each-other in significant, but very different ways. The ending partially reminded me of “The Graduate” in that even though it seems like a happy ending, the characters themselves don’t look very happy. The problem is that it’s just not played up enough. I could never make up my mind as to what the film thinks about its primary characters. Do they realize that they aren’t truly in love and have potentially made a very bad decision? It’s too ambiguous for its own good. I will concede that at least “Kiss of the Damned” succeeded in the erotica department. There is a certain sexiness about it that mixes in well with the violence. It brings back what I thought was lost amongst vampire flicks, the deadly but sexy allure of vampirism.

Unfortunately the script does think it’s significantly smarter than it really is. It’s more interested in the vampire culture than it is in its central characters. In fact, the writer/director treats its protagonists as afterthoughts. Many of the characters have some sort of depth or internal conflict, but most of these inner struggles are only brought up late into the film, when they suddenly have to confront those issues. Paolo shows little to no attraction to Mimi, but is quick to be seduced by her and it’s suggested that he was always attracted to her. Djuna is even worse. Mimi brings up that Djuna ‘turned’ Paolo for selfish reasons, but Djuna is dismissive of the claim and it never comes up again. Or what about a certain revelation regarding the fate of another character? At no point did I ever feel Djuna would do what she did. Instead, the film focuses more on the people around them, especially Mimi. The world they live in does sound pretty interesting. They compare vampires drinking human blood to substance abuse, which kind of clever, if a bit heavy handed. I liked how the vampires are incredibly cultured, delivering some inspired lines, like the “Beluga of politically correct plasma” bit. But in terms of plot…is there a plot? Honestly, what I’m seeing resembles a bunch of subplots acting as the plot. The funny thing is that the majority of Mimi’s plans- the closest thing to the plot- don’t even include the heroes and at no point do they ever seem to be aware of what she’s doing. In fact, her resolution has NOTHING to do with them. It’s as if Djuna and Paolo went through the entire movie without even being aware of the plot, if there was one to begin with. Despite summaries claiming that it’s going to be some sort of love triangle, that’s a minor issue in the long run. But the way the story unfolds is fairly unique. You might consider the ending to be somewhat revolutionary. As with many arthouse projects, you will either adore or loathe what “Kiss of the Damned” is trying to do.

Yet what makes “Kiss of the Damned” more tolerable than most of its contemporaries is it succeeds at creating a surreal, sexy atmosphere. A lot of time was obviously spent on framing various shots, making sure the lighting was just right and that the music matched with the visuals. Yes, I think Xan Cassavetes needs to seriously learn restraint in certain areas, like splicing together two different love scenes- one in which the male is being violently murdered- which is just too much. But at least she’s trying her absolute hardest to make something memorable. “Kiss of the Damned” also deserves credit for avoiding the bane of most ‘arthouse’ exploitation flicks, bad pacing. Don’t get me wrong, this is a slow paced movie. But just as a fast pace isn’t always entertaining, a slow pace isn’t always boring. Slower films emphasize the atmosphere, which is where “Kiss of the Damned” excels. If there was more action, its greatest strength would’ve lost its impact.

It’s thoroughly possible that “Kiss of the Damned” is more intelligent than I’m giving it credit for. Perhaps it was aiming to tear down the rules of cinema with its odd style of storytelling. Just as a lot of time was put into filming the script, maybe every supposed flaw- from the lack of plot to the romance- was part of its attempt to be unconventional. If that’s the case, then maybe it was so smart that it alienated even its target audience. The critics and film snobs, the guys who usually champion this kind of shit, didn’t like “Kiss of the Damned” very much. What’s ironic is that I still thought this project was more coherent and watchable than most arthouse pandering films, such as “Rubber” or “Death Bed“, so deserves more praise than those pieces of trash. Maybe that’s why. Maybe the filmmakers wanted to bridge the gap between mainstream and high brow audiences, but was too high brow for the former and too mainstream for the latter. If it was more of a conventional romance or horror film, general audiences probably would’ve been more appreciative. If it was MORE artsy, the film snobs would’ve embraced it. I can’t bring myself to call “Kiss of the Damned” a good movie, but it’s the type of movie that shows a lot of potential for the filmmakers. I can also see it developing a strong cult following over time, but let’s face it…this isn’t my cup of tea. My definition of high class cinema is “Dead Sushi“, which has fire breathing, flying, zombie killer sushi…If “Kiss of the Damned” contained such greatness, I probably would’ve loved it.

Nudity: LOTS of it.