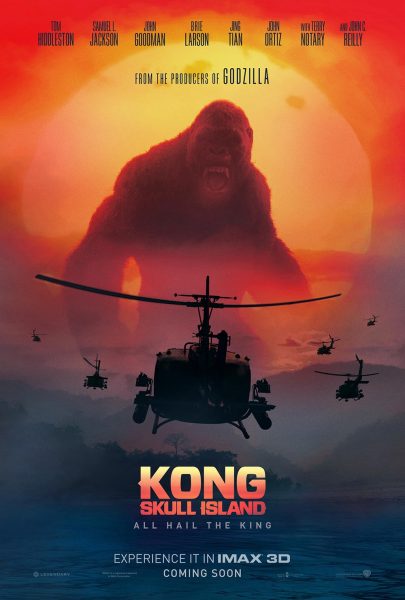 Plot: A mix of soldiers, scientists and monster hunters are stranded on an uncharted island during the 1970’s, only to discover that it’s inhabited by an assortment of monsters, notably a giant ape named Kong.

I have to admit that the backlash surrounding “Kong: Skull Island” was starting to make me nervous, even though the critics have been positive, if somewhat disappointed. I want this new Kaiju-verse to get off the ground and the marketing campaign has produced some incredibly flashy trailers, so my excitement only was rivaled by my expectations…and the dread of knowing that “Kong: Skull Island” would not likely meet those expectations. But now that I’ve seen the movie, I’ve become defensive and even a little hostile towards the complaints, as I found this to be a thoroughly enjoyable experience. The reviewers claim that “Kong: Skull Island“- whether they like it or not- should be faulted for its simple storyline and shallow characterizations, but I have to assume they have not seen the original “King Kong“- which arguably had an even simpler storyline and even shallower characterizations. While regarded as a masterpiece, people seem to forget that “King Kong” was a special effects driven movie and it has only been put on such a high pedestal because of its technical innovations. I didn’t grow up with “King Kong” and don’t feel the same reverence towards it, even though I do enjoy the film and respect its accomplishments, but I believe nostalgia is playing a role here. The cast of “King Kong” had very little to do other than react to the situations they’d find themselves in, but none of their relationships, back-stories or character arcs carried any weight, because we’re supposed to be busy marveling at how lifelike Kong is. They’re placeholders until the good stuff kicks in. For the record, I have no problem with “Kong Kong” because I understand its objectives, yet its fans seem to think it’s something deeper than it really is. “Kong: Skull Island” tries to add some depth to its characters, relationships, histories and internal journeys, while also giving the cast enough room to showcase their personalities. I found their interactions to be a lot of fun and considering how large this cast is, I thought it fleshed out the majority of them adequately.

Now I do agree that there are some problems, such as Brie Larson’s character suddenly forming a bond with Kong near the finale, which feels shoehorned in there to fill out the  ‘Beauty and the Beast’ quota which comes with every Kong story. In hindsight, her character probably only existed to fulfill this role. I also felt like the Packard (Samuel L. Jackson) subplot wasn’t explored to its full potential. In my opinion, it would’ve been better if he either had more screen-time, to fully realize his toxic character development, or had less screen-time, to add to his mysterious aura. I’m still not entirely sure how I feel about Conrad (Tom Hiddleston), as he’s introduced as a scruffy, disillusioned rogue, but immediately becomes a valiant and consummate professional once they arrive on the island, although Hiddleston handled the material well and let his charm do most of the work.I’ve heard complaints about Kong’s personality not being fully realized, but I disagree, as we’re supposed to be afraid of him during the first half. Kong gradually reveals he’s more than just a beast, with his (very animated) facial expressions and implied loneliness being enough to make me care for the monster. Yet even when he more-or-less becomes the hero, I always felt uneasy in his presence, which I think makes the great ape more compelling. I also liked his enemies, the Skullcrawlers, for their distinct designs and crafty nature. Whereas Kong has a certain nobility to him, they’re malicious and can be just as dangerous as Kong. But “Kong: Skull Island” always kept me entertained as the cast has the right amount of chemistry and everyone delivers their lines with the right amount of energy, while the CGI wizards made characters out of their effects. 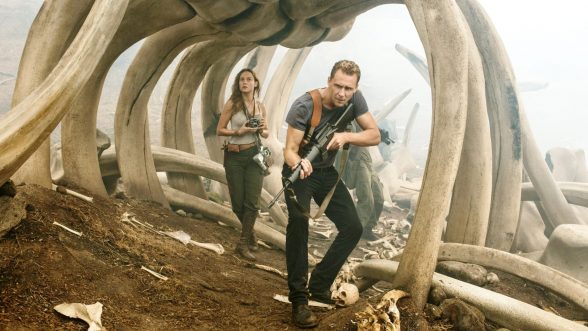 But do you know what I liked even more about the characters? “Kong: Skull Island” isn’t afraid of killing them off, often in shockingly gory and depressingly unceremonious ways, with even the order of deaths being kind of unpredictable. This kept me continuously on my guard, especially as I liked the majority of the cast, if only because of their talents as performers. But let’s face it, the real star is…well, the spectacle! I thought the CGI was excellent and the action scenes were both exciting and intense. Yet the art direction is what really captured my attention, as the vibrant colors and odd shapes dominate every single scene. Director Jordan Vogt-Roberts, cinematographer Larry Fong and their team of art directors craft so many eye popping visuals, from Kong’s silhouette blending with the sun to the burning wreckage falling all around an unflinching Packard. There isn’t a single scene that looks mundane and the wild color scheme is matched by an even more colorful tone, which can either be described as eccentric or disorienting. “Kong: Skull Island” is usually striving for a feeling of terror, but there are a lot of humorous sight gags and dialogue exchanges, with some wacky moments like John C. Reilly wielding a katana and being kind of bad-ass with it. I understand why the humor can be distracting and I agree that not every joke lands, but I thought the quirkiness added to the films personality- which I found to be endearing. “Kong: Skull Island” is actually a prequel to “Godzilla (2014)“, with both films serving as the basis for a new shared universe surrounding Kaiju (the post-credits scene brought out my inner fanboy). I’d say “Godzilla (2014)” is a steadier movie, as “Kong: Skull Island” probably did ‘bite off more than it could chew’ with its large cast and strange tone, but “Kong: Skull Island” took more risks and entertained me a lot more.

Violence: PG-13, but it arguably should’ve been R, as it gets pretty nasty.

Overall: “Kong: Skull Island” is a highly entertaining creature feature, but isn’t striving to be the dramatic tragedy that the original “King Kong” was, so should not be judged as such.