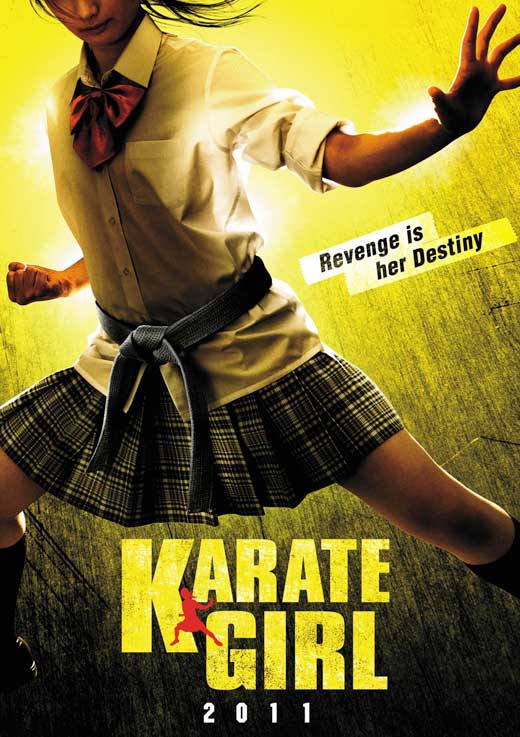 Plot: Ayaka (Rina Takeda) is a high school girl who also happens to be a highly gifted karate expert. Yet it turns out that she has a dark past. Her family’s heirloom is a black belt that’s over 200 years old and is respected by all the masters. Her Father (Tatsuya Naka) was its guardian until he was brutally murdered by a gang, who took off with the belt and Ayaka’s little sister. But it turns out that they got a fake belt, so they decide to hunt Ayaka down to get it back. They have been training her sister, Natsuki (Hina Tobimatsu) to be a fierce assassin and decide that she would be perfect to take Ayaka out. Can Ayaka bring Natsuki back to her senses or will she die protecting the belt?

I was anticipating “Karate Girl” because it was Rina Takeda’s followup to “High Kick Girl“, a film I thoroughly enjoyed even though I wouldn’t call it a good movie. It had a simpleton plot- if there was a real plot at all- and the direction was amateurish. Yet I was cool with that because Takeda was a charmer and the fights were awesome. As someone who has grown up with Karate, it’s refreshing to see movies finally learn how to deliver slick karate choreography. But if “High Kick Girl” only existed to show how awesome Rina Takeda is, “Karate Girl” actually tried to expand its horizons and be a legitimate movie. Does it succeed? Spoiler alert, no. But I kind of liked the film anyway.

Like the previous film, “Karate Girl” aims to deliver well choreographed fight scenes that aren’t too fanciful. The movie primarily relies on kicks, punches and the occasional grapple. Sure, occasionally there will be some sort of Jackie Chan inspired stunt, but that’s to help keep the movements from becoming stale. The techniques used here feel authentic. The kicks really look like they’re connecting, but the fights move at the right pace so they never become sluggish or wooden. Part of my adoration with these new Karate themed movies is how different they are compared to their (more popular) kung fu brothers. At least in the movies, kung fu tends to resemble a dance. It’s flashy, having a lot of jumping and flipping. It’s an exaggeration of the real art but it’s entertaining to watch. Karate has less overt movement and relies on fewer attacks, so it’s kind of boring to look at. Usually when it does appear, it’s either ‘karate-in-name-only’ (Bruce Lee’s opponents in his films) or they combine it with kung fu (Sonny Chiba’s “Street Fighter“). Part of the problem is it’s very difficult to pull of a karate technique without actual hitting the person. Somehow, the filmmakers of “Black Belt” finally figured it out and Rina Takeda’s movies continued with that formula. The fight choreography is down-to-earth, relying on actions and reactions. A person would kick and their enemy would either counter attack, block or dodge before throwing a technique of their own. Or they would take it and we would cringe, wondering if bones were broken in the assault. Everything moves fast enough that the fighting seems genuine, but in a cinematic kind of way. So while it might achieve the same rhythm as a kung fu battle, it has a totally different aesthetic. One subtle touch I (for some reason) almost missed is that the sister’s style IS more flashy. It’s pretty interesting to watch them finally clash for that reason alone. 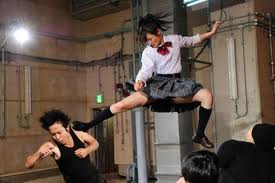 Once again though, they make the mistake of hiring a novice director. Last time, the director overused slow motion and seemed to forget the importance of sound effects (so the punches SOUND like they hit). The new director doesn’t over use slow motion, but it when it does utilize it, it’s during the more simple and mundane moves. The director’s biggest issue is his over-reliance on the actors dramatic capabilities (more on that later) and his cheesy attempts at being arty. Some of the shots are meant to be powerful and inspiring, but instead they come across as corny. The over-reliance on flashbacks becomes rather jarring too, continuing to harm the already struggling pace.  We get it! The father f@cking died and that makes her sad and angry! STOP SHOWING US THAT SAME FOOTAGE! The over-the-top opening narration sets up a goofy tone, but this is followed up with a dramatic death scene that’s supposed to be a tear-jerker. So the movie sets itself up as campy, but then is melodramatically serious? So check off ‘tone’ as another one of the films failures too. A major complaint I have with the director, however, is how bland the final fight scene is. Keith (Richard Heselton), the villain, almost seems like he’s slowing down in order to match the girls (probably because he looks like if he really hit them, bones would be broken). The film tries to make up for it by making the fight more about their emotional journey, but the film forgot to give them an emotional journey for this to matter. Ironically, the final fight does resemble a ‘realistic’ karate fight. But that level of realism looks boring on screen. Thankfully, the sound effects were better and you could hear every strike connect wonderfully. Gotta love those over-the-top sounds.

But the films biggest problem is how boring it can be. So much of this movie is people talking while they walk. Where are they going? Usually it’s unimportant. What are they talking about? Something we probably already know from another talk-while-we-walk sequence. The movie randomly includes subplots that don’t go anywhere (what happened to Ayaka’s other female companion?) and then tries too hard to be dramatic. I like Rina Takeda, but she isn’t quite ready for this kind of role. With “High Kick Girl“, her role was the hot headed fighter chick who needed to be brought down a notch. She wasn’t always likable, but she was interesting. Here, she’s playing a static character who never really has to learn anything. She’s boringly good and it would take a strong, dramatic actress to give this role depth. It requires nuances and all that crap, something which took Jackie Chan 40 years to master! I like Takeda, but acting wise, she has nothing to do so she’s relatively boring when she’s not kicking butt.  Her sister actually gets show more range, but what’s the problem? She’s a MUCH worse actress than Takeda. Her expression is always blank, which almost fits the character, but the director REALLY tries to emphasize her inner turmoil. She might be a better fighter (she seems quicker), but isn’t much of an actress. Maybe she will get better though. Only time will tell. By the way, why is Takeda wearing her karate gi in public, but when she shows up to fight in the next scene, she’s wearing her schoolgirl outfit…? Weird. 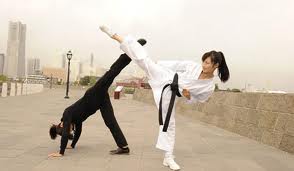 So “Karate Girl” isn’t a very good movie. The fights are solid, but there is a lot of downtime between them where people walk, talk and flashback to earlier parts of the movie. But at least we don’t have to watch a forced love montage where the couple flashback to the two scenes they had together (“Legendary Assassin“, I’m looking at you!). So we’re forced to endure a lot of bad drama, awkward direction and poor writing. I don’t even need to go into how retarded the plot is. Yet I’ve given this a lot of thought and have decided that despite its faults- and my disappointment- I do sort of enjoy the movie. My Father and Uncle both teach karate and I’ve been around it my entire life, so watching a (usually) accurate representation of the art is a bit of a novelty for me. It’s fascinating to see my favorite martial art look good on screen. So liking “Karate Girl” comes down to how you respond to the karate choreography. I loved it, so I like the strengths more than I hate the weaknesses.

Violence: Rated PG-13. Lots of beatings. Nothing too bad.

Overall: Watch “Black Belt” and if you like how karate looks on-screen, watch “High Kick Girl“. If you’re still entertained, THEN give “Karate Girl” a look.