Plot: Hahou Mo (Donnie Yen) is an elite martial artist who landed himself in prison after he accidentally beat an opponent to death. But when a deranged maniac (Baoqiang Wang) starts murdering other martial artists, Hahou Mo makes a deal with the Police to assist them in return for his release. But he may have met his match…Also known as “Kung Fu Jungle” and “Yi ge ren de wu lin“.

Donnie Yen has made some interesting- if occasionally misguided- career choices since striking gold with “Yip Man“, although his age probably has a lot to do this. Jackie Chan and Jet Li had achieved similar stardom as much younger men and while Yen has enjoyed a strong cult following, he never pulled himself on top of the industry until they chose to step down. This meant that while he would continue to do kung fu, he would infuse his martial abilities into other genres- period pieces, dramas, romance, epics, fantasies, mysteries, thrillers, etc. Most of the films were okay (“14 Blades“) , but weren’t as good as they were obviously trying to be (“Bodyguards and Assassins“) and some have already are infamous (“Iceman“- which is apparently getting a sequel!!!). I’m personally fine with him broadening his horizons, but I only bring all of this up because “Kung Fu Killer” has no aspirations to be anything but a kung fu flick. For those who haven’t enjoyed the direction of Yen’s career, you should be overjoyed at his ‘return to form’. But for those who were making a real connection to his current body of work, you’ll likely see this as a step back because…it’s not very well written and I’m not even sure if it was trying to be. “Kung Fu Killer” is simultaneously a bad movie and a good kung fu flick, so enjoying this comes down to what you want out of it.

Every reviewer and their Mothers who are also reviewers have have claimed that “Kung Fu Killer” is a ‘return to form’ for Donnie Yen and he definitely deserves a significant amount of praise. However, many viewers have also overlooked that he isn’t carrying the majority of the action. He does participate in a handful of fights, but the bulk of the martial arts tends to surround Baoqiang Wang, whose character is targeting kung fu experts. I’d argue that Yen himself doesn’t fight anymore than he has since he began experimenting with other genres, although this isn’t a detriment to the film. For one, Donnie Yen is still in great shape and moves just as swiftly as he ever has. Two, Baoqiang Wang is also stunning and I am now very interested in what he does in the future. The choreography is just astounding, allowing the performers to show a variety of advanced techniques. Everyone has their own style, so expect kicking based battles, grappling matches, brutal strikes, sword duels and intense brawls where the combatants must use their surroundings and whatever they can get their hands on in order to win. Everything is fast paced and flashy, with only some wire works and post production trickery catching the eye. There’s also an abundance of martial arts action, so the movie never waits long before delivering more combat. 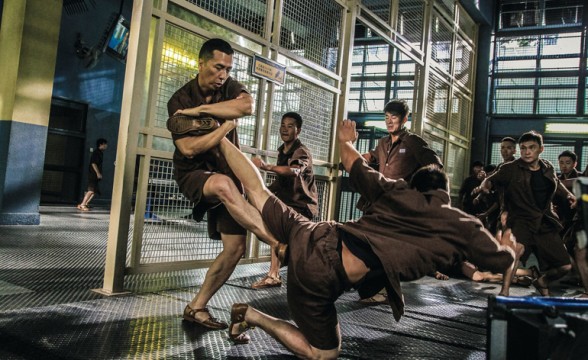 The quality fight choreography makes “Kung Fu Killer” worth watching, but it’s the situations and gimmicks which makes it worth remembering. So you have two expert kickers fighting to the death, but do you know what will make that even more epic? Have them fight on top a giant replica of a human skeleton. That is…arguably the best…thing…EVER!!! I love that kind of warped, bizarre creativity. Admittedly nothing else really compares to that, but I always had a blast with the locations. Whether it’s on a…and I shit you not…movie set or in the middle of a busy street, “Kung Fu Killer” was constantly finding creative ways to showcase its action. The cramped areas were also pretty cool, as the close quarters combat amped up the intensity. I’m not the biggest fan of director Teddy Chan, as most of his movies tend to be lethargically paced (“The Accidental Spy“, the aforementioned “Bodyguards and Assassins“), but I never felt like “Kung Fu Killer” was moving too fast or too slow. It’s a highly energetic film and the camerawork never distorted the action, sometimes even providing some gorgeous cinematography. Yeah, I have to acknowledge that some of the CGI near the end was weak and the editing wasn’t great. I never thought the fight scenes really looked choppy or anything, but sometimes a shot will fade out as someone is about to land an attack…only to fade back in while the same attack is happening…only to fade back out as the attack ends. This only happened a few times and I think Chan was going for something artistic there, but it looked a little goofy to me. Nevertheless, as a kung fu bonanza, “Kung Fu Killer” consistently entertained me. But you have to be a fan of this genre to share my feelings as the writing can be pretty terrible.

“Kung Fu Killer” has one of those stories which can only advance because every character is unbelievably f@cking stupid and they do everything wrong all the time. Hahou Mo (Donnie Yen) has a good idea who the targets will be, so why doesn’t he tell the cops at once? Wouldn’t it make sense to send officers to each of the potential victims, so they don’t have to rely on the core characters arriving on time? The only reason they don’t do this is so our heroes will always arrive just a bit too late. You can argue that Yen’s character is intentionally withholding this information to ensure that he won’t just be sent back to prison, but that makes him into an arguably even worse villain than the murderer, who at least has the excuse of being insane. But it’s not like the cops ever press him to tell them. Eventually, it does become apparent that Hahou Mo is hiding some secret, but it has nothing to do with this faulty narrative. I kept thinking that most of the problems between the characters were due to a lack of communication. Hahou Mo’s justification for hiding ‘something’ is flimsy, although the reasoning behind his release was already pretty weak. We’re obviously not supposed to think about any of the logic here, as all the writers want is to get him out of prison and make us question the character before the third out. Hahou Mo is also prone to fleeing from his law enforcement allies, so he can…see his girlfriend? I guess? That seems like a good way to get your ass thrown back into prison and I’m sure he could’ve made an excuse to see her that the cops would’ve accepted. This only happens so there will be a conflict between our hero and the  police later on. Granted, it’s not like the cops are anymore competent than he is. If they can screw up, they will. Every time they did…anything…I would plant my face into my palm. The love interest (Michelle Bai) attempts to corner the killer…on her own…even though she knows that he might be Hahou Mo’s superior in the art of fighting…How do you think that’s going to end? If characters just communicated and used their heads instead of their fists, they probably would’ve caught the killer almost immediately.

The script is just so damn bad. The dialogue is corny and transparent in its philosophy, which makes me laugh as some critics admire this aspect of the film. There’s no depth, as I’ve heard these philosophical teachings in almost every kung fu film ever made and it’s too on-the-nose and silly sounding to take seriously. There was a lot of potential in the character arcs, but none of it is properly utilized. Hahou Mo doesn’t develop as much as his personality just changes depending on what the scene requires of him. Fung Yu-Sau (Baoqiang Wang) is supposed to be a tormented soul, but his motivations are vague…if not outright confusing. Does he want to die? Does he think his dead wife would be proud? Despite having an intriguing back-story, he ultimately is just a one-dimensional villain. Michelle Bai (Sinn Ying) is…a love interest and that is the extent of her characterization. Luk Yuen-Sum (Charlie Young) is… a cop and that is the extent of her characterization. The acting is fine, but the character writing is so flimsy that you won’t be able to tell. “Kung Fu Killer” has no substance and was badly written, but…I can live with its badness. Throughout my viewing experience, my analytical brain was having a kung fu battle on top of a giant skeleton with my dazzled eyes, who were defending the honor of the spectacular martial arts on display. So as a potential viewer, you have to ask yourself…What do yo want out of “Kung Fu Killer“. If you think awesome choreography conquers awful writing in the kung fu genre, definitely check this out. But if you want something more…then maybe this isn’t for you. I’d suggest you watch “Yip Man” or “Dragon“, which are superior movies. I liked “Kung fu Killer” because I do believe that the quantity and quality of the action sequences should be prioritized over the writing in these kinds of flicks, yet I can’t help but feel like the filmmakers missed a great opportunity here. Perhaps if the script was stronger, I’d be reviewing a kung fu classic. But I suppose there’s nothing wrong with just being fun for what it is.

Overall: “Kung Fu Killer” pits a horrible screenplay against a barrage of awesome fight scenes and interesting visuals. Who wins? That depends on you, but I’m a fan.