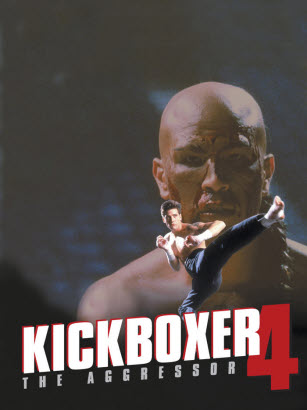 Plot: David Sloan (Sasha Mitchell) has been framed for murder by his old nemesis, Tong Po (now played by Kamel Krifia), who also kidnaps David’s young wife. David gets a chance to win his freedom and wife back if he participates in a tournament being held by Tong Po.

“Kickboxer 4: The Aggressor” does not feel like it was originally written to be part of the “Kickboxer” franchise. I had similar suspicions about “Kickboxer 3”, only because I thought it was out-of-character for our protagonists to gun down thugs and make light of the situation with one-liners. But “Kickboxer 4” barely resembles its predecessors. It’s edgier, meaner- yet oddly, sillier- and takes David Sloan down a relatively dark path. For some bizarre reason, David started to work for the DEA (!!) and was assigned to take down Tong Po, who is now a Drug Lord in Mexico. He gets framed for a murder, even though by his account, he DID kill the person even if it was justified. While he’s in prison, his wife is raped and taken as a sex slave by Tong Po. He’s ultimately released by the DEA, so he can finish what he started, even though this sounds like an overcomplicated and dangerous solution on their part. Does this sound anything like the previous “Kickboxer” movies? Are we sure they didn’t take a spec script and just change the names? Whether they did or not, it apparently worked out for the better because I liked “Kickboxer 4”. It’s still not as good as “Kickboxer”, but it’s better than the other two sequels.

I shall begin this review by praising Sasha Mitchell for delivering his best performance. I had previously praised his acting abilities in “Kickboxer 2”, but I did feel he failed whenever he was attempting to act menacing. He didn’t look the part and oversold his delivery. He struggled in “Kickboxer 3” because they were trying too hard to make him funny and the comedic material was pretty awkward. But the humor has been mostly removed in “Kickboxer 4“, although he does get in the occasional attempt at (bad) comedy (I’m beginning to think it’s a character trait). This time around, David is a legitmate badass. There is an edginess to his performance. He’s angry and bitter, but Mitchell isn’t overtly trying to act angry and bitter. He just…is. Yet you can see the original characterization of Sloan buried deep underneeth the surface. He still feels compelled to help kids, even if he’s not as ‘soft’ about it as he used to be. His mannerisms are still the same, but they’re less corny. Sasha Mitchell perfectly captured the characters development and I’m actually a little sad he didn’t do more as an actor. He could’ve made a decent action lead. In many ways, he made “Kickboxer 4” work. 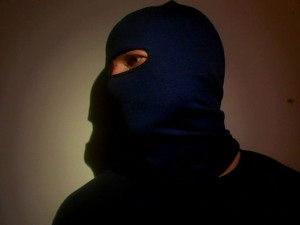 Unfortunately, Albert Pyun (“Kickboxer 2”) is back as the director and once again, he hired a crappy supporting cast. In all fairness, I’m not entirely sure if they are to blame. The young girl, for example, is annoying because of the role she’s playing. I can’t stand bitchy characters, so her acting seems worse off for it. My favorite bad actor was Brad Thornton (Lando Smith…seriously, that’s his characters name), who makes the funniest battle cries during his fight scenes. My least favorite bad actor was Kamel Krifia (Tong Po), who lacks the presence of his predecessor, but is mostly upstaged by that awful make-up. I don’t know what’s worse, that you can see where the makeup ends around his eyes (revealing a different skin color) or that the camera angles draw so much attention to it. Krifia’s performance is surreal, because he overacts like mad crazy, but there doesn’t seem to be any energy in any of his lines. How is that even possible? At least his smile and childish antics are pretty funny. But this doesn’t feel like the same character. Whereas we can see the David of old in Mitchell’s performance, Tong Po never really feels like Tong Po. By the way, Mr. Pyun, it was probably a bad idea to use stock footage from the previous films. It just reminds us that we have a new Tong Po, with even worse makeup.

The production values are low, but I thought they were used fairly well. Don’t expect much in terms of the Mexican locations, as the majority of the screen-time takes place in Tong Po’s compound. “Enter the Dragon” definitely comes to mind when it comes to certain story elements, but there isn’t anything aesthetically pleasing about Tong Po’s home. It just looks pretty bland, although the movie isn’t trying to portray it as anything more. Luckily, “Kickboxer 4” is action packed. The tournament gobbles up a lot of screen-time and shockingly, the fights aren’t bad. The fighters all have diverse styles and their techniques are pretty impressive, complimenting the above average fight choreography. Unfortunately, as I said, Pyun is still the director. He is incapable of injecting any sense of energy or excitement in these battles, but you could argue that these fights are more realistic. It’s a case of ‘quantity over quality’, but since they happened so often, I was satisfied. 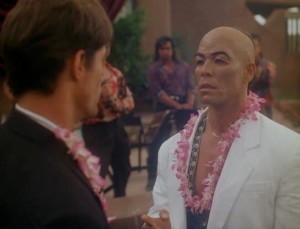 When the tournament isn’t going on, David Sloan is dressing up as a ninja and investigating. Yes, you heard that correctly. David Sloan is dressed….as a ninja…OHMYGODTHATISSOAMAZING! While he sneaks around, we bear witness to how sleazy “Kickboxer 4” is. We get quite a bit of female nudity (and some male nudity, but who cares about that!) and all of it is gratuitous. Lando (try not to snicker) has sex with some hot chick, who shows us her lovely looking breasts. Sloan accidentally witnesses a threesome going on between some dude and two babes. Yay! Oh “Kickboxer 4”, if only you were “Kickboxer 2”…Albert Pyun does a pretty good job at being exploitive. When naked ladies appear, he balances close-ups and medium-shots nicely and…okay, I am getting hung up on the nudity. But Pyun gave his audience- or more specifically, me- what we- or more specifically, I- wanted. Boobies, blood and combat!

Now don’t presume that “Kickboxer 4: The Aggressor” is a good movie. I thought it was okay, but generally the reception has been more negative. I guess it depends on what you felt about the previous two films. I did feel that a few relationships were unexplored/unnecessary, David Sloan seems absent during the middle block and why the DEA would use him makes no sense. The finale is definitely a point of contention among the viewers and I agree. David has become ‘too’ strong. No one stands a chance against him and he and Tong Po are evenly matched despite David being tired and injured (and guess who comes out on top?). I’m beginning to suspect that Tong Po isn’t THAT great of a fighter, as Kurt pwned him once his brother was safe and I’m pretty sure that Eric would’ve won had Tong Po not been so underhanded. The only thing that “Kickboxer 2” did right was have Tong Po trash David pretty easily at first, making David’s victory actually mean something. “Kickboxer 4” ends with a mostly one sided fight and then the movie just stops. Tong Po’s ‘fate’ is weak and we don’t get any real reunion between David and his wife. It’s just a very unsatisfying conclusion to what was an entertaining film.

“Kickboxer 4: The Aggressor” was a lot of fun. Sometimes that entertainment level would come from me laughing at it, but other times it was because the movie was genuinely enjoyable. The fight scenes are average, but Mitchell conveys rage in every punch, so the emotional content that was lacking in the second films choreography is finally present. As someone who appreciates the martial arts, I enjoyed watching the different styles clash and appreciated that they dominated the majority of the screen-time. I also appreciated the sleaze, the absurdness and most of all: Sasha Mitchell’s fine performance. This was the last time he would portray David Sloan and “Kickboxer 5” would follow a new character. Since the sequels have gotten better, will this continue that trend? We’ll have to see!

Nudity: Lots of it.

Overall: “Kickboxer 4: The Aggressor” was my favorite of the sequels (so far?). If you gave up after part 3, maybe you should give this a look. Maybe…