(Written by Dennis A. Pratt) 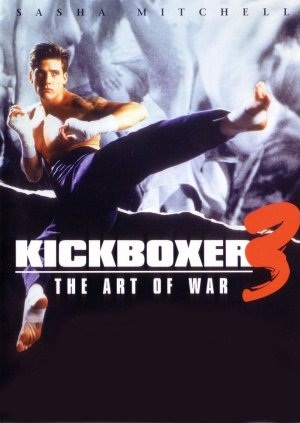 Plot: Kickboxing champion David Sloan (Sasha Mitchell) and his mentor, Xian (Dennis Chan), travel to Rio in order to participate in a kickboxing tournament. They soon find themselves hunting for a missing girl, which leads them to a sexual slavery ring…which ties in to the tournament.

If you’ve seen “Kickboxer 2“, the beginning of David Sloan’s three movie story, then “Kickboxer 3” must seem quite bizarre. In the previous film, Sloan was a good natured, naive kid who didn’t want to hurt anyone. But in “Kickboxer 3“, he’s a trigger happy gunslinger who not only puts holes in plenty of thugs, but he makes goofy one-liners after ending their lives. It’s even crazier when it turns out that he just wiped out the wrong dude’s henchman. Whoops! Xian isn’t any better, but at least he has the decency to hold his gun sideways like a complete moron, so we’re too busy laughing at how ridiculous he looks to notice how his character changed.  Actually, this whole project is pretty odd when you think about it. While there is still a kickboxing tournament, it takes a backseat to the sexual slavery story. Character development and depth is sacrificed for action and violence. The more I thought about it though, I began to realize that “Kickboxer 3” didn’t necessarily break the formula of the previous two films. “Kickboxer” and its first sequel also had more large scale stories about corruption and abuse going on in the background. “Kickboxer 3” merely brings that to the front of the plot. But do you know what? I kind of liked it. Yes, it’s bad. But it’s more…my kind of bad.

Before I discuss this third entry, I should remind you that I disliked “Kickboxer 2: The Road Back“. I wouldn’t call myself partial to character dramas and that was a poorly made character drama. It had a bloated script, bad acting, badly rendered fight scenes and was just kind of boring. If you are a fan of it, then you made a connection to the characters and their situations, but I did not. So I could only pay attention to its more objective faults. “Kickboxer 3: The Art of War” is more firmly rooted into the action genre, which I prefer over character dramas. That’s not to say that I can’t appreciate a good tear-jerker, but they have to be ‘good’ in order to have a chance with me. But action? It doesn’t take too much to please me. Thankfully, Rick King was a better action director than Albert Pyun. There’s nothing exceptional about the fight scenes, but they do ultimately achieve a rhythm. Sasha Mitchell looks like he might be in better shape, so his physical presence made him a little bit more believable. Either that, or the director simply knew how to film him in a way that made him seem more impressive. The gun fights are standard, but the bloody squibs always make me squeal in glee. There was definitely more action this time around, or maybe the mayhem was just spaced out more effectively. While it does run out of steam by the ending, the pacing usually was tight enough to keep me invested. The training sequences were definitely a couple steps up over that limp shit we got last time, primarily because of the context. Instead of training to become stronger, he’s forcefully trained by the villain so he won’t be as strong for the big match. That is shockingly clever. 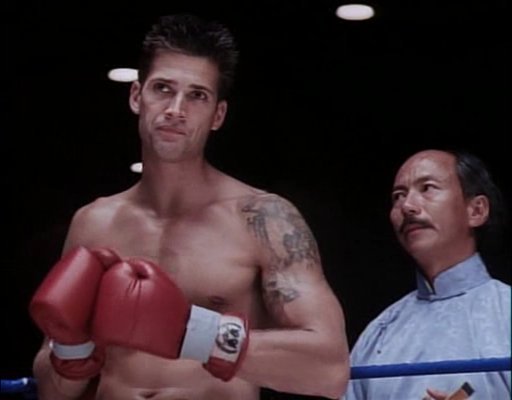 But once again, let me remind you that this is still a pretty bad movie. Oddly, the quality of the cast has flipped around. I actually felt the majority of the players did good, even the kids! But Sasha Mitchell’s delivery was consistently off. To be fair, he didn’t have too much to work with. The dialogue is ridiculous and the director apparently wanted him to play up his goofy mannerisms. Throughout the bulk of the movie, David acts like kind of a dork and I’m not entirely sure that was what Mitchell was attempting to convey. He keeps trying to be funny, but these scenes backfire because…well, they aren’t very funny. His reactions often felt unnatural too. At times, he delivers his lines as if the scene was filmed away from where the other person was. So it doesn’t sound like he’s actually interacting with them. In the previous film, he did pretty good. It was just about everyone else who sucked. Here, the supporting cast is pretty good. He was the weakest link. Dennis Chan at least gets more to do and he does it well, even if the material he’s given is also a bit iffy.

Actually, the attempts at comic relief reflect the biggest failure of “Kickboxer 3“. When it attempts to be humorous, it’s rather annoying. But when it wants to be taken seriously, it’s pretty hilarious. I suppose that this does provide some ‘so bad, it’s good’ content, but it does prevent me from fully supporting it. Sorry Rick King, you did an acceptable job in the action department, but I think the blame lies on your shoulders. Even though it’s the screenwriter who develops the story, characters, dialogue, narrative, etc. It’s the directors job to direct his audience just as much as he does the actors. The director has to put a scene together in such a way that we feel an emotional impact. When he can’t bring out the right emotions from us, he’s doing something wrong. But at least he succeeded in the most important area: The action. Once again, it’s a bad action movie, but it doesn’t completely fail in that regard. Even when it does make a misstep, at least it provided some unintentional comedy. I had a bit of fun. Maybe “Kickboxer 3” isn’t necessarily better than “Kickboxer 2“, but it appealed more to my tastes. Does that make me biased? Yes. Yes, it does. Luckily it doesn’t really matter as neither film comes close to matching the original.

Violence: Rated R worthy. The fight scenes themselves aren’t as brutal as its predecessors, but the shootouts are pretty bloody.

Nudity: I can’t think of anything specific, but there is a sleazy bar scene and sexual slavery is constantly mentioned.

Overall: I liked it more than “Kickboxer 2“, but would I necessarily recommend it? I don’t know. It depends on what you felt about the previous two films.