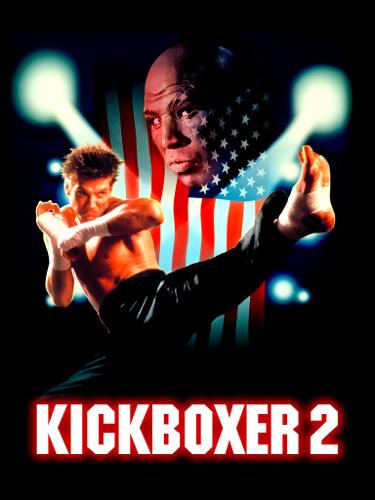 Plot: David (Sasha Mitchell) is the last of the Sloan brothers, but lacks their passion for fighting, so his gym is going downhill. But a series of convoluted events will bring him back to the ring in order to challenge Tong Po (Michel Qissi), the man who killed his siblings.

“Kickboxer” may have been shredded apart by the critics, but general audiences and fake-critics (such as myself) adored it and turned the film into a smash success. Jean-Claude Van Damme was rapidly becoming a true action star, so it was only natural that someone attempted to make a sequel. There was just one problem. Van Damme wasn’t interested in making sequels, so passed on the project in order to do “Double Impact“, where Van Damme plays two roles, both being the gayest straight men to ever appear in the history of cinema. This didn’t deter the studio, who decided to piss on the fanbase by having his character, the older brother and the love interest killed off in the lamest way possible (off-screen). They also retcon a few things, like how they had a younger brother named David despite the fact that Kurt and Alex said they were the only family they had. There is a lot about “Kickboxer 2″ that will make you raise an eyebrow, but does that make it a bad movie? Not at all! Everything else about “Kickboxer 2” makes it a bad movie.

When I saw that the writer was named David S. Goyer, I had to do a double take. Was this the same respectable writer who gave us “Batman Begins” and “Dark City“? Holy crap, it was! This must’ve been written before his talent kicked in, because the majority of the problems I have with “Kickboxer 2” can be traced back to him. My primary issue is that the writer- or maybe the director, you can never tell- doesn’t seem to understand how melodrama works. Think about Kurt in the first “Kickboxer“. Like David, he is naive and optimistic, but this mindset shatters when he witnesses his brother crippled. Everything he does in the movie ties in with his quest: To avenge his brother. His training regiments are brutal, but he has to learn to endure them in order to improve himself, so he’ll be strong enough to take on Tong Po. This made his ultimate victory satisfying, because he spent the majority of the running-time earning his happy ending. That might be conventional melodrama, but it works. David’s final confrontation against Tong Po doesn’t feel as victorious because he wasn’t even aware of who Tong Po was until about 15 minutes earlier. In fact, while much of the story is about getting David to fight Tong Po, David himself is unaware of this. 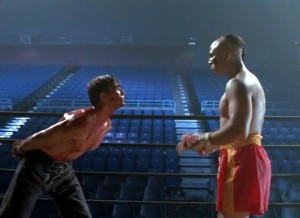 But this flaw goes much, much deeper than that. Throughout the majority of the running-time, David has unclear motivations. Why did he go back into the ring? It’s ambiguous as all three possibilities have holes. He could’ve done it for the money, so the kids who stay with him won’t be thrown out on the street. But then he retires afterwards and I doubt one match will financially make a difference. He says he wanted to put Maciah (Peter Doyle) in his place for being corrupt, but it’s hard to take his “he uses drugs” claim seriously because there was never any prior indication of this. Because Maciah was so poorly established, it robs us of any sense of achievement when David comes out on top. But then Maciah slowly leaves the story while Sanga (Cary-Hiroyuki Tagawa) becomes the new threat. David’s gym burns down, a child is killed and he is critically injured. Xian (Dennis Chan), who had previously trained his brothers, comes to help him out. But while David quickly recovers, we don’t know what he’s training for. He never once expresses a desire for vengeance. Amusingly, Brian (Vince Murdocco)- David’s student- has a better story arc than David does. He just wants to make something of himself, so we witness his accomplishments and the beginnings of his self destructive behavior. I couldn’t stand Brian, but at least there was a decisive goal surrounding him. David isn’t even aware of the actual plot until the final act. The filmmakers throw in all this noise about minor, insignificant characters who only pad out the story and diminish David’s importance. The screen-writer made EVERY possibly misstep in fleshing out this character drama because all of this means we cannot bring ourselves to care when tragedy strikes or they overcome the odds.

I am aware that “Kickboxer 2” has developed somewhat of a cult following and I’m pretty sure you fans are wondering why I’m spending so much time on the drama, when it is a martial arts movie. That’s because it’s not action packed and the fight scenes mostly blow. The fight between David and Brian feels too rehearsed. I could’ve sworn a character started to duck before his opponent even began his high kick. The battle between David and the champion is unconvincing because their hits appear too soft. One of the best aspects of “Kickboxer” was how brutal the kicks and punches felt. Here, when a blow connects, it looks like they’re just tapping each-other. When Tong Po and Brian clash, it is a little more grisly. But the entire thing WAS SHOT IN SLOOOOOOOOOW MOTION! That got tedious rather quickly. The final fight is definitely the best, primarily because it’s a little grueling seeing David’s face turn to ground beef over the course of the match. But even then, it’s pretty flat compared to everything the first one delivered. It just lacks emotional content and Michel Qissi seems to be holding back against the less skilled Sasha Mitchell. 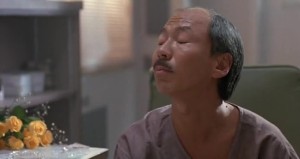 Albert Pyun was the director and he is primarily known for consistently making ‘almost mediocre’ films. “Kickboxer 2” is neither a blemish or a success on his filmography.. “Kickboxer” used cheesy 80’s music to explore its protagonists state of mind. “Kickboxer 2” uses crappy 80’s music to do the same thing.  Pyun holds too many shots for way too long, effectively killing the pacing. The aesthetics are pretty shoddy looking too. Gone are the exotic locations. Now we get cheap, boring sets. The training sequences are especially depressing. Just look at the crap that Kurt went through in order to achieve his goal. He had his legs pulled apart, T-bone style. He had coconuts dropped on him from trees. He had to be chased by a dog. He had to practice kata underwater. Xian got him drunk and made him fight a bunch of thugs. That is hardcore! What is David’s training regimen? Practicing techniques in the park. Walking. Climbing a rope. Walking. Doing push-ups while Xian rests his legs upon him. And walking. YAWN! How does this blandfest have fans?

I only have one more point to make: Sasha Mitchell. Actually, I have to admit, I thought Sasha did fine. He’s a more refined actor than Van Damme was, so there are less awkward and embarrassing moments. He’s strikingly handsome and can emote better than Van Damme did. While I felt the character was a bit whiny, Sasha is able to make him reasonably sympathetic. But he just lacks Van Damme’s charisma. Van Damme, in a lot of ways, carried his movie. Sasha is arguably the best thing about “Kickboxer 2“, but he can’t save it. He also lacks any kind of physical presence. He apparently was a black belt in Taekwondo and it shows, as his kicks are pretty impressive. But at no point did I ever think ‘badass’ while watching him. Luckily, I’d take Mitchell any day over Vince Murdocco, who was awful. He might look tougher, but can’t act worth a damn and made his already testy character even more detestable. Cary-Hiroyuki Tagawa and Peter Berg are probably the best actors, even if they aren’t doing anything that we haven’t seen them do before. I was a little disappointed in Dennis Chan as Xian. He’s gone from quirky to silly, although I guess that’s not the actors fault. The supporting cast in general is pretty poor, ranging from stiff to hammy. But none of the characters caught my interest in general and the actors did nothing to help that.

So it might surprise you that despite my obvious positive tone of this review, I dislike “Kickboxer 2” (hurray for sarcasm!). I felt it failed on every level, but in the same ways that Albert Pyun’s movies usually fail. It’s almost- but not quite- mediocre. There is nothing offensively bad about it, but nothing reaches my level of acceptability. I spent the majority of the running-time disinterested in what was going on. They over-convoluted the story while causing the emotional impact to recede. When I cheered at the end, it was only because the experience was finally over. There isn’t a lot of action and I wasn’t impressed with the choreography. “Kickboxer 2” is a shining definition of ‘not very good’. But do you know what? I don’t look down on those who do appreciate it. If I wanted to be technical, “Kickboxer” isn’t ‘good’ in the traditional sense either. I just happen to like it. I made an attachment to the characters and situations, while appreciating its objective strengths. If you happen to like this sequel for the same reasons- even if I can’t think of any objective strengths- then more power to you. What’s really frightening is that “Kickboxer 2” has the best reputation amongst the sequels. I can only quiver at the thought of the terrors that lie ahead of me.

Violence: Rated R, but it’s not as grisly as the first one.

Nudity: None. Actually, I can at least praise this for not having a shallow love interest.

Overall: “Kickboxer 2: The Road Back” isn’t just a mess. It’s a mess that took away everything that made its predecessor so appealing. Yet it has a following, so if you liked the first one, you might want to consider giving it a look.