(Directed by Mark DiSalle and David Worth)

(Written by Glenn A. Bruce and Mark DiSalle) 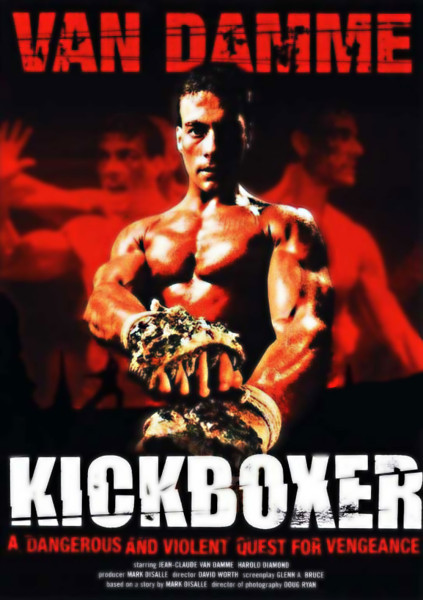 Plot: Kurt (Jean-Claude Van Damme) witnesses his brother, Eric (Dennis Alexio), crippled during a kickboxing match with the ruthless Tong Po (Michel Quissi). In order to avenge him, he must learn from the brutal and unorthodox master named Xian (Dennis Chan). Will he become strong enough?

“Kickboxer” is arguably responsible for a trend that would plague Jean-Claude Van Damme throughout the 90’s. Whenever his career would hit a snag, he would proceed to recycle elements from his previous, more successful movies. This one came after “Cyborg“, which wasn’t very well liked among the masses, even if it did earn a profit. He apparently figured he might as well play it safe and dust off the formula he helped create with “Bloodsport“. Despite this, “Kickboxer” isn’t a rip-off of its predecessor. Both deal with brutal training regiments, bizarre American stereotypes, underground martial arts tournaments, kickboxing and Van Damme’s bulge. But to call it a rip-off is oversimplifying the issue. “Kickboxer” may be a little derivative, but it emerges as its own warrior. The real question is…is it any good? Yes. Damn it, I probably shouldn’t have said that so early. There goes the dramatic impact…

I guess I better begin with the main difference between “Bloodsport” and “Kickboxer“. “Bloodsport” aspired to be dumb entertainment, being ripe with cheese, good fights and a nonstop sense of fun. Sure, it was pretty bad in some areas, but it succeeded with what it aimed to be. “Kickboxer” is much darker, emphasizing the violence over the choreography. Whereas the former was about the style of the techniques, the latter s about the pain those techniques cause. That’s not to diminish the choreography, although let’s face it, “Ong Bak” more-or-less made this obsolete. The flashiness present in most of Van Damme’s movies has been limited, allowing the fights in “Kickboxer” seem a bit more grounded in reality. A bit more…But I was more impressed by the rawness of it all. Watching these fighters look like they’re genuinely hurting each-other was a grueling experience. I was constantly cringing and flinching at the carnage. The finale is especially harrowing, as Van Damme and his enemy use hemp rope that is coated in resin and dipped in glass. This bloodies up the confrontation rather nicely, giving the final showdown a mean edge. 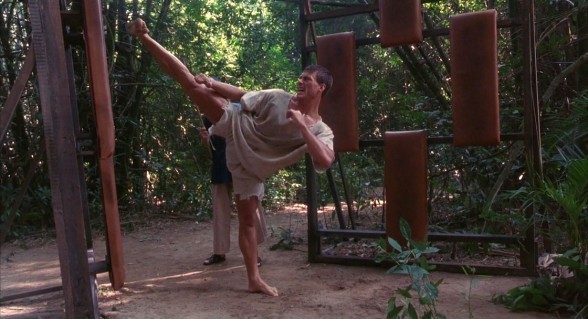 The tone is a bit jittery though, as expected from an 80’s action film. From the first 20 minutes, we have to endure some bad acting and cheesy music, not to mention the fact that Van Damme and Alexia would be more believable as gay lovers than brothers (at least they explain the accent). But just as we start becoming comfortable with the silliness, the story takes some dark and hellish turns. While the transitions can be distracting, I never minded it. If anything, the bi-polar tone made the events a little more unpredictable. The exposition is clunky and the attempts at drama are overblown, but there is something endearing about it. “Bloodsport” also had its own brand of badness, but it somehow made it work in spite- or maybe because?- of that. Furthermore, I can talk about how the film is begging us to give a shit about what is happening all I want. But the truth is, I did give a shit. When the first wave of tragedy strikes, I felt sad. I attribute this to Van Damme improving his acting chops. His performances wouldn’t become consistently good until…oddly, he was regulated to direct-to-DVD fodder. But this was a step up from his previous two films. He’s still not perfect. His dialogue delivery can be wooden and he still struggled with enunciating certain words (although it fits with the characterization; English is supposed to be his second language), but there are moments where he totally sells the scene. Watching his brother crippled and then left out in the streets is terrifying because you see and feel Van Damme’s panic. His naivety is charming (helped by his indisputable charisma) and there is something rewarding about watching the character grow. Van Damme’s best acting comes from his fighting skills. Early on, we see that he’s a competent- but unexceptional- fighter. But we see his abilities and confidence increase, making the prospect of his victory so exciting.

Back to other aspects of the film-making, the direction is simple. Sometimes the directors will make a questionable decision, but other times they strike gold. The locations are gorgeous and I felt the cinematographer did a solid job capturing their beauty. The production values are surprisingly nice, considering the low budget. But it also never loses that B-movie feel, which I believe adds to its identity. My final praise is to the other characters. While yes, they are playing caricatures and stereotypes, the supporting cast is a lot of fun too. I especially liked Dennis Chan as the eccentric, but wise, teacher. He’s pretty amusing and has a strong presence about him, even though the actor didn’t know any martial arts. The love story might be tacked on, but Mylee (played by Rochelle Ashana) has an actual personality and I enjoyed watching her interact with Van Damme. Even the bad acting by the brother or the token black guy didn’t diminish the characters enjoyability.

You better learn to embrace the characters, because believe it or not, there isn’t a lot of action. There are three major fights involving Van Damme and a handful of lesser ones surrounding the other characters. Enjoying this is going to come down to whether or not you like watching these people interact. Since I liked them, I was able to like the movie. I don’t want to give you the impression that “Kickboxer” is slow. It moves pretty well, balancing character, plot and action oriented scenes rather smoothly. But those expecting the non-stop action of “Bloodsport” might be a little disappointed. I wouldn’t say it’s as much of a character drama as “The Karate Kid” was either, so don’t expect anything like that. It’s definitely a hybrid of the two, giving us enough action to please its target audience, but also allowing Van Damme to do a bit more in terms of acting. I’m a little unhappy with this review because it’s really difficult to talk about a movie like “Kickboxer“. It is something you have to experience yourself. But it is “Kickboxer” month, so expect me to discuss the next four sequels throughout March of 2013.

Nudity: None, but there is an off-screen rape.

Overall: “Kickboxer” is worth watching if you like these kinds of movies. As such, it’s pretty good!