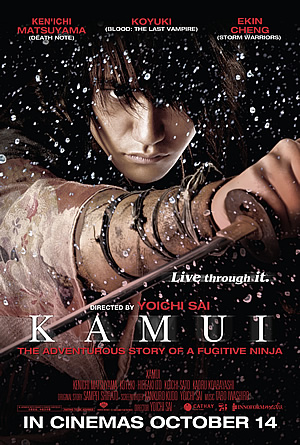 Plot: Kamui (Ken’ichi Matsuyama) is a disgruntled ninja who wishes for a more peaceful life, so flees and finds himself hunted by his own clan. He befriends a fisherman named Hanbei (Kaoru Kobayashi), who has just earned the ire of an insane Lord. Now Kamui must protect him, outwit Hanbei’s (former) ninja wife (Koyuki), evade his pursuers and…hunt…sharks? Also known as “Kamui Gaiden” and “Kamui: The Lone Ninja“.

“Kamui” is apparently based on one of the most iconic manga of all time, even though it’s relatively obscure in the United States. Nevertheless, its popularity tends to be overshadowed by its influence on future mangaka. This in itself means nothing to me, as I had never even heard of the graphic novel until I started doing research about this live action adaptation. But even if it’s the best manga of all time and “Kamui (2009 film)” remains faithful, some narratives just can’t be translated into the realm of cinema. I’ve read “Naruto“, “Bleach“, “Attack on Titan“, “Fairy Tail“, “Dragonball” and “InuYasha“, but even when they are at the top of their game, I still think they’d make horrible movies. Too episodic and each arc lacks the material to provide a standalone film. Furthermore, as “John Carter” taught us, being based on the work that formed many of the cliches and conventions which subsequent films or novels would popularize can make your movie seem incredibly formulaic by today’s standards. I don’t know how closely “Kamui” followed its source material, but somehow there is so much story that it ends up feeling like there was no story at all. This isn’t a bad flick and I will concede that there were some cool moments, but “Kamui” tries too hard to be something it’s not- a manga. Wong medium, guys.

Point #1: Does “Kamui” feel dated because its source material has been imitated too often?: Yes and no. Honestly, we have a very conventional story of an assassin trying to escape from his violent lifestyle only to find himself being pulled back into it in order to protect those he loves. I’m pretty sure this idea has been around forever, so I honestly didn’t mind the lack of originality. Sure, I find it odd that this was produced during the same era that gave us “Ninja Assassin” and “The Warrior’s Way“- both of which have the same plots. But it doesn’t matter because “Kamui” offers plenty of odd little ideas which helped give it its own identity. For example, for absolutely no reason, sharks start terrorizing the village and they require the help of pirates to defeat them in this ninja movie…Just writing that gave me a boner and even the hilariously awful CGI effects that would make even the Asylum laugh couldn’t undermine such awesomeness. If only there was a ninja sharknado… 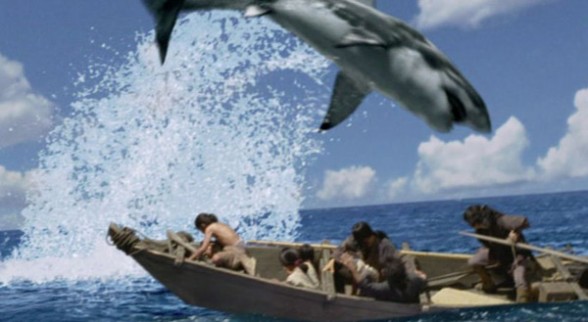 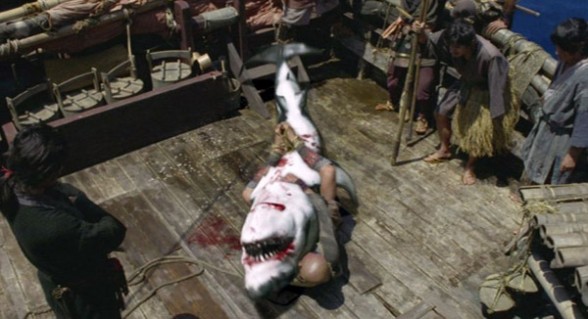 Point #2: Is “Kamui” restricted by its source material?: I don’t know, but I presume its loyalty to the comic is the reason why it has such an episodic narrative. These kinds of story structures are tricky because it’s too easy to prematurely climax, since each ‘episode’ must have that big moment. Story #1 is Kamui fending off his former ninja brethren. Most of Kamui’s feelings are revealed through narration, which is some pretty lazy writing as they should be showing instead of telling. But the voice over explains that Kamui doesn’t want to kill anymore, not that it really matters because the viewers never encounter any of his past moral conflicts, even in flashbacks. Yet they dedicate a flashback to a relationship between Kamui and a friend-turned-enemy who doesn’t even last beyond a scene. The sad thing is…that relationship is more fleshed out than the real love story. Story #2 focuses on Kamui trying to adjust to a fishermans life, but finds himself in a new conflict when he’s recognized by an old enemy who has also chosen to settle down. I enjoyed this a lot more as the wife’s (Koyuki) attempts to kill him were pretty suspenseful and compelling. Their underwater struggle was pretty creative and the motivations behind both characters were understandable. I also thought Hanbei was a lot of fun. The love story between Kamui and his daughter was pretty standard, although I liked the actress. The whole subplot involving a jealous suitor didn’t make a lot of sense and its attempts at generating tension were wasted. But I found myself wanting more of ‘Kamui vs Ninja Chick’ and even more of Kamui’s interactions with Hanbei. But Story #3 has to hijack this and the focus is shifted to a psychotic Lord, who captures Hanbei. It’s a rescue mission that ends so abruptly that you’ll find yourself wondering why it was there in the first place. I presume the Lord will be important in the sequel that never happened, but his inclusion was very awkwardly handled. Story #4 involves the pirate shark hunters and this is pretty fun in a ‘so bad, it’s good and AWESOME’ kind of way. Their leader was cool and the ludicrous spectacle which accompanied this storyline fascinated me. I can’t hate anything which contains a man wrestling a shark. Yet even I have to concede that these highlights were unnecessary. Every time one of these story-threads starts to build momentum, they abruptly are resolved and left me feeling very unsatisfied. A manga can get away with having individual sagas and an overarching plot, but you can’t cram all of that into a two hour runningtime without ruining what made the source material compelling to begin with. In a manga, that much content is what makes it epic and memorable. In a movie, that same content is going to make the story seem unfocused, disjointed and underdeveloped.

So the script contains too many desired story-threads and ideas, when it probably should’ve chosen only a few and focused on fleshing them out. Ken’ichi Matsuyama is a good actor and he ALMOST redeems what is such a boring role by showing us how he has developed. He starts off as stoic and aloof, but develops a more easy going and less cautious personality as the movie progresses. But it doesn’t mean as much because we don’t see what he went through as a ninja and the voice over has to tell us what he’s feeling- which is bad character writing. You can justify the loose and episodic narrative by claiming that it’s less about the stories and more about Kamui’s journey and how these stories effect him. This would be an acceptable explanation, if they didn’t bungle the character arc. This isn’t an action packed flicked, although the opening and closing acts contain plenty of fighting. The choreography was good and the anime-ish techniques provided some cool visuals. With that said, sometimes they can look pretty silly, like when Kamui breaks a man in half or does his super ninja-style German Suplex. The CGI isn’t very good, but the action sequences were eccentric enough to remain fresh. The editing and camerawork never obscured the choreography or disoriented me, so I won’t complain. The cinematography is very pretty and the set design is just as good as the CGI is bad. But “Kamui” contains so much drama, tear shedding and sappy narration that I suspect it wanted to be taken seriously as a story and character driven film. So this praise is just window dressing, trying to cover up its broken and beaten narrative. “Kamui” is too flawed to be considered a success in terms of quality, but it’s not terrible either. I enjoyed it in parts, but I’d say it’s pretty mediocre as a whole.

Overall: “Kamui” is pretty average, even if it’s a faithful adaptation.