JOURNEY TO THE WEST: CONQUERING THE DEMONS (2013)

(Written by too many people) 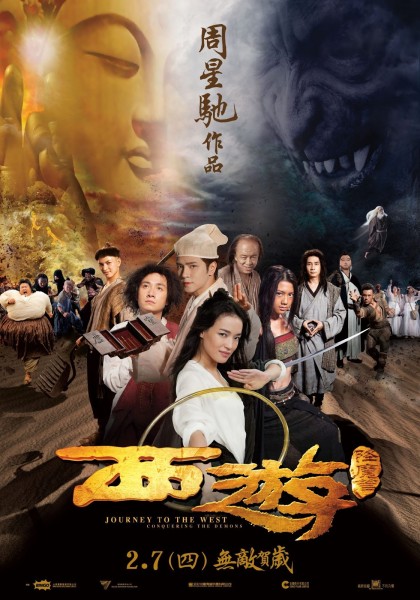 Plot: Xuan Zang (Zhang Wen) is an inexperienced demon hunter whose pacifistic style doesn’t seem to work, but that doesn’t keep him from trying. In order to improve his skills, he is sent to find the Money King (Bo Huang), but he will meet plenty of rivals, allies and demons along the way. Also known as “Xi you xiang mo pian“

This is one of those ‘nightmare reviews’, where I find myself sitting in front of my computer screen for an abnormally lengthy amount time, trying to figure out what I should say. I have all the notes I’d usually need, but organizing them into a coherent, entertaining critique is turning out to be quite the challenge. “Journey to the West” is awesome, a thoroughly breath-taking experience that bridges the madness of Stephen Chow’s earlier works (“Forbidden City Cop“) with the mainstream appeal of his more recent films (“Kung Fu Hustle“). This movie took my breath away, delivering eye candy and pulling out emotions that I had long thought were zombified. I guess I should begin by pointing out that I have not read the source material, although I’ve seen its tendrils within nearly every other form of media (TV shows, movies, etc). It doesn’t really matter though, as despite sharing the same title, this is more of a prequel than an adaptation. But the important thing is that “Journey to the West” is awesome.

I should warn you that Stephen Chow’s sense of humor primarily caters to Eastern crowds and I have complained of the bi-polar tones in their “comedies” many times. Tragedy and farce often find themselves holding hands, or in the case of a Sammo Hung movie, Tragedy is likely to be sexually assaulted by farce. There will be those who will be turned off by a lot of the content present in “Journey to the West“, as a terrifying scene where a little girl is eaten by a demonic fish is followed by slapstick comedy. This usually inspires anger from me, but I found myself really appreciating it for some reason. Even though the humor relies on a lot of over-the-top facial mugging or physical comedy, which might seem too broad for western audiences, I laughed at every single gag. Part of my difficulty in reviewing this is that the comedy has so many different angles I can talk about. There are plenty of golden lines and I love how sincere the actors are when delivering them. Characters believe a gigantic Sting Ray was the killer and demand vengeance. They are reminded that it’s already dead, to which someone responds: “Then let’s kill it again!”. The delivery of these lines are very sincere, which makes them funnier. “Journey to the West” has a very eccentric sense of humor and I was often thrown off by the absurd situations the characters found themselves in. I never knew what to expect when it came to what a character would do or say, adding a lot of unpredictability to the mix. But it’s the reactions to this craziness that made me laugh the hardest. I often had a “WTF” expression along with the characters in response to some of the wilder moments. The comedic timing was masterful and my belly was certainly aching by the end of the feature. Awesome. 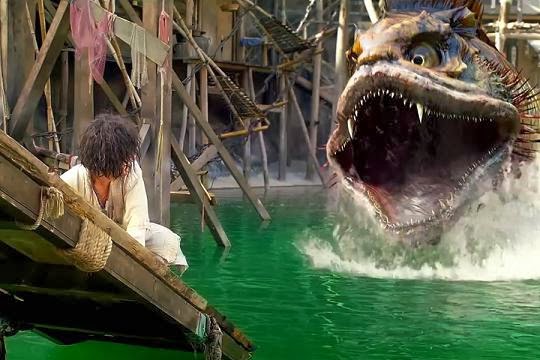 But this brings us back to my original point: The tone. Chow is no stranger to balancing drama with laughs and “Journey to the West” has no desire to change his formula. This movie can get DARK, at times even descending into outright horror. The opening segment is about a demon terrorizing a fishing village, which reminded me of “The Host“- er, the good Korean one. The suspense is high and even though everything is so colorful and vibrant, you feel that everyone is in peril- even infants. The second segment is pretty creepy, as various unsuspecting characters stumble upon a mysterious inn with a dark secret. Yet the comedy and terror are so seamlessly woven in together that I not only accepted the divergent tones, but I EMBRACED them as a whole. I think part of this comes from the films unpredictability, which is arguably its greatest asset. You might be spending the majority of your viewing chuckling- if not laughing- and this leads you to believe everything is safe. But then something occurs which catches you off guard, primarily because of the tone. The second half does slowly begins to push away the comedy so that the finale never loses its grasp on your nuts. There is humor, but it’s pretty dark and fits within the context. The Monkey King is kind of terrifying, but he can be amusing in a twisted kind of way, so his bantering and demented playfulness allow for some intentionally awkward laughs. I don’t know how, but Chow can pull off these vastly different tones and turn what is usually a criticism into an eccentricity. There are also a lot of sad parts, which did genuinely bring tears to my eyes, although the uplifting parts helped keep this from becoming too depressing. “Journey to the West” can make you laugh, cry, shiver and marvel all during the SAME scene, which is amazing. The message is also moving as well, primarily because it pushes a belief system that isn’t always convenient. Yet that’s what makes the idea so powerful. Awesome.

The characters are very quirky and memorable, which actually will lead into one of the only problems I have with “Journey to the West“. On paper, the set-up is familiar. Xuan Zang is a young, naive and inexperienced monk who wishes to do good, but he’s constantly out-shined by Duan (Shu Qi). In most films, he would follow her around and become a total bother until his good nature starts to rub off on her. “Journey to the West” avoids this cliche by having Duan fall in love with him instead, despite- or because of?- his weaker traits. Now she’s following him around, trying to get him to return her feelings with some baffling scenarios. They have great chemistry and their interactions are always very entertaining. Their development also becomes more apparent every time they appear on the screen, which is very difficult to pull off without feeling forced. The supporting cast is a lot of fun too, with Bo Huang nearly stealing the show as the Monkey King. He strikes the perfect balance of silly and sinister. There isn’t a single bland characterization, but the problem is “Journey to the West” doesn’t always know what to do with its cast. A large chunk of characters vanish without a trace and I was left feeling that there was something…restricted…about the narrative. Sometimes the segments flow into the next too abruptly and I think this could’ve been fixed by adding to the running-time. Despite not being a short movie, the movie does feel too short. I wanted to see more of these characters and how they effect the story, but I guess that says something when you’re only major complaint is ‘it needed to be longer’. Awesome. 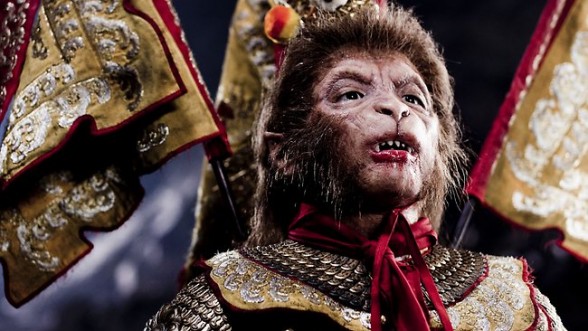 The locations are constructed using photo-realistic CGI and it looks gorgeous. There isn’t a single mundane set or shot, each visually burning its own place within our memories. The colorful backgrounds are very appealing and the demons were creatively designed. Even when the Computer Generated Imagery looks phony, the visuals are so outlandish and otherworldly that they don’t necessarily have to look completely realistic. The boar was probably the only weak spot as it resembles a normal- albeit much larger- boar, so lacks the fantastic color designs and strange shapes that other CG effects rely on. As for the martial arts, “Journey to the West” delivers the same kind of action that we got in “Shaolin Soccer” and “Kung Fu Hustle“, although the fantasy elements are more prevalent. There is a mix of traditional choreography, wire works and CGI and it meshes together incredibly well. Every fighter is equipped with their own gimmick, whether it’s being able to manipulate iron rings, increase the size of their limbs or seemingly being able to control various weapons with their minds. The demons usually have multiple styles of combat, the first being when they are in their humanoid form, but they will step it up when they turn into giant monsters- which are significantly more dangerous. None of the action scenes grew stale because each one is different, either introducing a new kind of foe or a stipulation that changes the dynamic of the battles. The finale is outright crazy, making all of the previous epic fights seem small and insignificant in comparison. The pacing is brisk because everything is balanced out so smoothly, so you never go long without combat, suspense or comedy. The beauty of this movie though…well, beyond the obvious aesthetic application of that term…is how well it plays our emotions. “Journey to West” pretty much made me experience every emotion that it wanted me to feel, even if they were contradictory and were piled together in the same scene. during the same scene. I don’t know if I’d say this is the best work of Stephen Chow, but it pulled out a stronger reaction from me. I demand a sequel! That hook was brilliant! Speaking of which, the music is cool because it blends classical Chinese elements with spaghetti western motifs. It was perfect for an adventure film  and its use during the ending added a whole new level of emotion. Awesome. Awesome. Awesome. Awesome. AWESOME!

Nudity: There is quite a bit of sexuality, with mostly people acting sexual during comedic attempts at seduction. Nothing explicit though.

Overall: “Journey to the West: Conquering the Demons” needs to become a franchise, one preferably with Stephen Chow at the helm. I thought it was awesome, but you have to be prepared for its broad comedic antics.