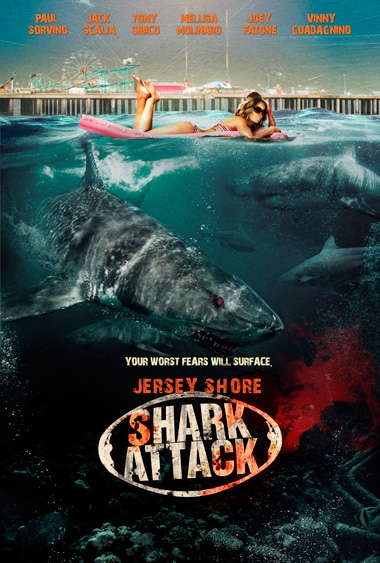 Plot: The residents of Jersey Shore- the actual location, not the reality TV stars- are terrorized by an army of albino sharks.

I don’t think I need to explain why I wanted to see “Jersey Shore Shark Attack“, because it’s called “Jersey Shore Shark Attack“. I’ve never bothered to watch the popular TV show, but it has become somewhat of a cultural phenomenon, so everyone knows the basics. Who wouldn’t want to see the Situation or Snooki get eaten by sharks? It’s just too bad that this production only snagged one member of the infamous cast for a cameo and I didn’t recognize him. But as amusing as the premise sounded, I knew “Jersey Shore Shark Attack” would be super boring because it was one of those dreaded Scyfy originals, so I put on my shit coat (get it? It’s like a rain coat…but it protects you from shit! Hoi Hoi!) and got to watching. Immediately the film jumped on my bad side, although I did my absolute best not to hold the awful CGI against it. The characters were annoying, being parodies of stereotypes perpetrated by the Jersey Shore cast and the dialogue produced severe headaches. The Shark attacks were unconvincing simply because they were relying on (bad) acting, whereas they should’ve been emphasizing the bad special effects. When characters names were revealed to be ‘The Complication’ and ‘Nooki’, I groaned. But then something miraculous happened…I kind of started to like it….

And the feeling of shame subsequently devoured me.

I’m not sure what caused me to suddenly turn around and embrace the awfulness of “Jersey Shore Shark Attack“. Perhaps my mind had finally snapped, but for whatever reason, I started to laugh. I think the game changing scene was when the cast confronts the sharks for the first time, trying to fight them off using fireworks. It was just so absurd, but the intensity of the actors really made it work. They act genuinely alarmed and frightened, even though all they have to do is back up a little bit and not fall into the water. Everyone seems oddly sincere  about the daft material, which only makes it more hilarious. The interactions during (and following) this were suddenly incredibly funny. They find a corpse and identity it as ‘Vinnie’, but this leads to a debate as to which Vinnie they had stumbled across. I also loved the bit where they use protein bars as bait for the sharks.  I understood that “Jersey Shore Shark Attack” was a spoof because of the names, but I didn’t laugh until the protagonists clashed with the sharks the first time- and then I didn’t stop. Please don’t hold that against me. While some might complain about the films hesitance to kill off its primary cast- and by some, I mean everyone- I actually started to find the characters endearing. They’re all stupid, but they’re good natured people and this made me want to see them survive. Plus, their idiotic moments are played for laughs. I thought the acting was bad at first, but the more I saw of them, the more I realized that these were good actors, playing bad actors, portraying over-the-top characters. Jeremy Luke in particular can definitely go places. They even snagged some respectable character actors like Paul Sorvino and William Atherton, who look like they’re having fun. Or at least Atherton is. Sorvino seems to go back and forth between enjoying himself, looking embarrassed and comforting himself by thinking of the paycheck. 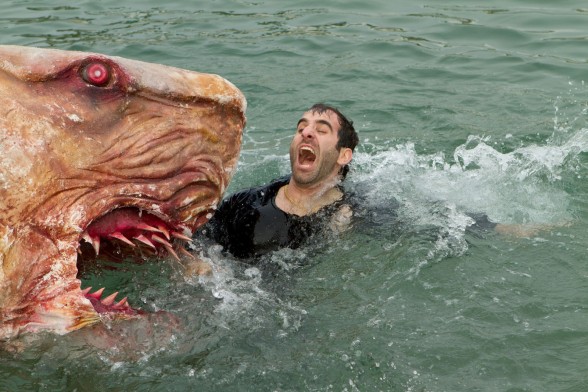 I actually thought the production values for “Jersey Shore Shark Attack” were bigger than what Scyfy usually delivers, although the CGI is definitely crappy. Every once in awhile there will be a decent practical effect and even when they look fake, they made me snicker at them. I thought the ineptness of the direction was charming, such as the (lack of) continuity. The depth of the water is inconsistent and the distance between characters, sharks, land and boats always seems to be changing. The writers…and apparently there were many of them…tend to rip off “Jaws“, which is kind of ironic if you know the story that inspired “Jaws“. There isn’t much else to talk about. Characters will do dumb things in order to provide a laugh or a death scene, but instead of getting on my nerves, they amused me. The film boasts enough baffling ideas to keep you off guard. I thought the dialogue ran from clever to intentionally bad (“I don’t think he drownded“), but the lines got a positive reaction from me. Yet the awfulness ensures that you will always be laughing at the movie, if not with it. After all, what do you expect from a flick called “Jersey Shore Shark Attack“? Well, I guess you could expect the actual Jersey Shore Shark Attacks of 1916…Shit…Um…Awkward. I’m just going to pretend I didn’t bring up a depressing real life story and return to the world of albino sharks. The style of humor took some time to get used to, but after a miserable first 20 minutes, I began to enjoy myself…and that is why I have very little credibility as a critic. *sigh*

Violence: Rated R. Most of it is tame, but there are a few nasty moments.

Nudity: None. But lots of scantily clad ladies.