(Written and Directed by Declan O’Brien) 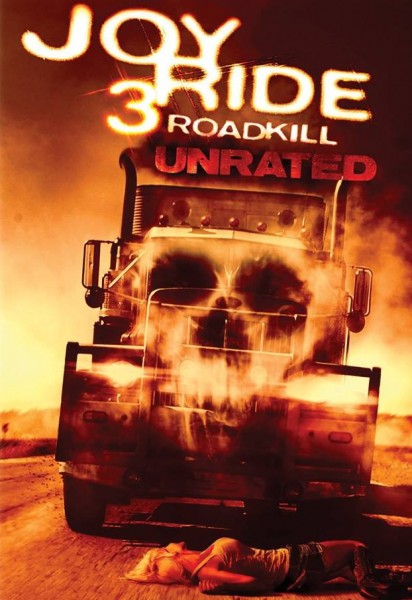 Plot: A group of racecar drivers stupidly cut off a trucker on a deserted road, nearly causing an accident in the process. Unfortunately, said trucker is Rusty Nail (Ken Kirzinger), a sadistic killer who loves tormenting his victims before rewriting their expiration date.

I was a little startled when I saw “Joy Ride 3″ listed under the ‘new releases’ section of my Netflix account, primarily because…why? I understand that there is a market for direct-to-DVD sequels, but lets look at the facts. The few people who remember “Joy Ride” do have fond recollections of the movie- myself included, but nobody continues to talk about it…or think about it…or as I said, remember it. As good as it was, it did not help build bandwagons, smash the box office numbers or spawn any immediate sequels. Yet SEVEN years later, “Joy Ride 2” was born. It was surprisingly watchable for a direct-to-DVD sequel, but the general consensus was “mediocre” and it couldn’t have reaped epic sales on the direct-to-DVD market because otherwise, “Joy Ride 3” would’ve been produced a lot quicker. But nope, SIX years later we have another followup. Why wait so long? At least the “Wrong Turn” franchise sort of remains relevant because there is seemingly a new sequel every other day, but “Joy Ride 3” has had too much dead space since its predecessor, which already had waited too long to matter itself. So why does it exist? Who knows! Maybe Declan O’Brien was tired of shilling out “Wrong Turn” sequels and wanted to cash in on something different…and by different, I mean not that much different. “Joy Ride 3” isn’t unwatchable, but it’s just a subpar slasher that isn’t really worth watching either…

Let me begin my review by praising what “Joy Ride 3” does right. It has some pretty good gore effects, which are messy and mostly practical. It has nudity and a fair amount of fanservice. O’Brien even shows some inspiration with his transitional shots, such as when a girl takes a picture with her friends, which is linked to the police taking a crime scene photo. The production values at least seem like a step up from its predecessor based on my memory of it. The locations look pretty cool, the explosions look real and the stunts look awesome.  Above everything, “Joy Ride 3” boasts a very fast pace. While nearly every other aspect of the flick warrants some form of criticism, from the directing to the writing to the acting- all of which are closer to being bad than good, I never found myself getting bored. My mind never wandered, I’d always pause the film in order to take notes (whereas if it was losing me, I’d just let it play) and I might even say I was entertained at times. Furthermore, the bad points might be pretty bad, but they never broke the experience for me like “Hostel 3“‘s failures did. I don’t want to say I enjoyed myself, but I did think “Joy Ride 3” was a passable time (serial?) killer…albeit one I’ll forget five minutes ago. But let’s move to what this flick does wrong…which is almost everything else. 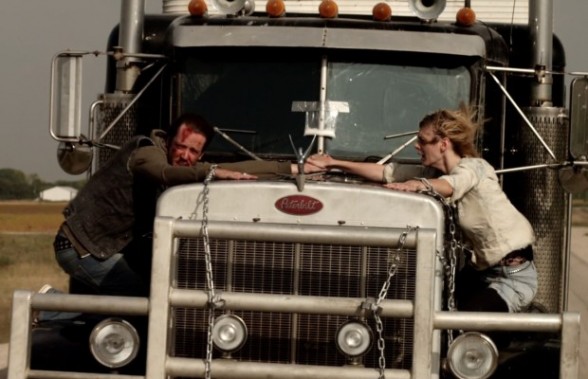 Say what you will about Louis Morneau (“Joy Ride 2“), but at least he seemed to understand the appeal of the original film to an extent, focusing on the psychological torment that Rusty forces on his victims. Rusty in “Joy Ride 3” has turned into a common serial killer, not bothering with humiliating anyone because he wants to get right to the brief physical torturing and killing. All of the mystery that surrounded the character dissipated when they chose to show his face. He was creepier when he was kept in the shadows, a spooky voice whose appearance was never fully revealed, but showing him this clearly just kills any tension the character can bring. He’s not imposing enough like Jason, mysterious enough like Michael or funny enough like Freddy- even though Rusty also attempts dark comedy by spewing out one-liners (which are awful) whenever someone is about to bite it. I did laugh at the “I learned that from the hockey ninja” line, but only because it was bizarre and I’m still trying to figure out what that even means. His truck is more frightening, but only because Rusty Nail himself isn’t frightening at all. As for the victim fodder, I will give credit to the writer for throwing me off with who dies and who lives. Otherwise, the characters are generic and they’re not very sympathetic. They’ll either be morally ambiguous in their actions or downright moronic with their decisions (so they can stretch out the story and die more easily). In the previous films, Rusty was presented as a crafty villain and “Joy Ride 3” tries to continue this tradition. Unfortunately, the writing makes it seem like Rusty only appears intelligent because his victims are really freaking stupid. The acting is typical for a direct-to-DVD flick. They’re not terrible, but they either emote too little or too much. One guy barely reacts to finding out his friends are in danger and another starts channeling “Simple Jack” from “Tropic Thunder” when begging for his life. The crying and yelling isn’t very well sold by the actors, so it was hard to take those scenes seriously. I never could tell whom I was supposed to root for. Should I cheer for Rusty Nail to kill off these obnoxious teenagers? But Rusty himself is presented as a liar, coward and sadist who often is guilty of collateral damage, so I don’t think that was the case…But with the attempts at trying to make him ‘funny’, I can’t be sure.

As for the rest of the script, it’s bad, but in a very conventional “it’s a direct-to-DVD movie” kind of way. The dialogue ranges to acceptable to stale to silly. The characters, as I said, are flat and unlikable. Half of these morons don’t even have personalities, other than their tendency to make noise. I don’t think the cop subplot added anything, other than to pad out the runningtime. It never lasts long enough to harm the pace, but it also doesn’t need to be there. The writer recycles a lot of the ideas from its predecessors, which only draws attention to the fact that “Joy Ride 3” isn’t anywhere near as good as “Joy Ride 1“. Why name the opening victim Candy? At least Rusty acknowledges this, but why? The bit where the truck slices another vehicle in half was not bad, but it lacked the bite of the original film (where it was the money shot). Even sequels need to have their own content, dammit!  “Joy Ride 3” was clearly designed to fit into the torture porn mold of horror, even though it’s not as extreme as those kinds of movies usually are. While the previous “Joy Ride” entries had violence, they emphasized suspense and psychological terror- even if the second film only partially succeeded- but this film had none. The Truck scenes are merely shrug inducing, while the repetitiveness of Rusty’s abductions got old quickly. A character hears a noise, they turn around, see nothing, resume their path only for Rusty to appear and knock them out. They wake up to being put in a “Saw“-esque scenario (without the mind games) and will die in an over-the-top, goofy kind of way. The kills reminded me of what we got from the “Wrong Turn” sequels, hence my earlier comparison, but they just don’t fit with “Joy Ride“. Well, I guess they kind of do. But whereas “Joy Ride” and “Joy Ride 2” achieved an identity outside of just being a slasher or torture porn, “Joy Ride 3” is just another example of the slasher and torture porn genres. Nothing about it stands out. I actually remember thinking “Joy Ride 2” was decent, but “Joy Ride 3” is merely mediocre. If you have to watch it, you can take comfort in that it will go down smoothly and not linger in your mind for very long, but why bother?

Nudity: Some, especially in the beginning- male and female.

Overall: “Joy Ride 3” is a tolerable, but forgettable, direct-to-DVD sequel. You can do worse, but only fans of “Joy Ride 2” should bother with it. The gap in quality isn’t quite as noticeable.