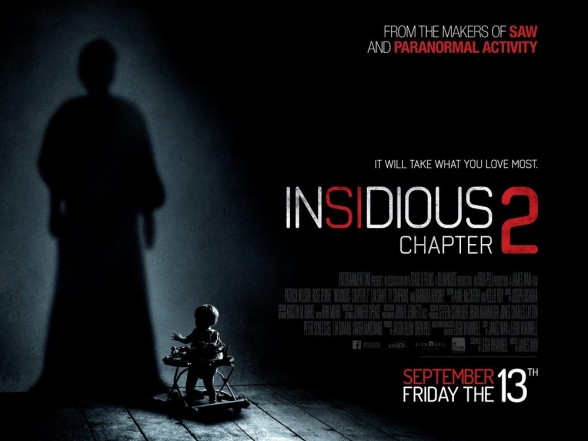 Plot: The Lambert family continues to be plagued by supernatural entities from the ‘the further’, which is sort of like a demented purgatory. It turns out that Josh (Patrick Wilson) brought something evil back with him when he returned from the place in the previous film.

While I wouldn’t call “Insidious” one of the highlights of modern day horror, I would consider myself a fan. It provided lots of nerve wracking suspense, spine tingling chills, nightmarish imagery and a colorful visual style which combined past and present horror together. The problem is that most modern day paranormal films tend to be eerily similar in terms of story structure and while “Insidious” had its creative moments, it was still trapped within its own ‘further’ (conventions). But I did like it anyway. Yet I could not say I was really anticipating this sequel for a few reasons. For one, I didn’t think it was necessary. I could see “Saw” becoming a franchise based on its content. What about “Insidious” demands a sequel? It’s antagonists included a Darth Maul lookalike and an old woman who looked creepy, but didn’t do much. Too derivative and familiar. The humans characters were fine, but nothing about them interested me enough to where I wanted to see more of them. The only character who might be worth following for a sequel did not survive the movie. So…why? Based on Wan’s interviews, I suspected he was only in this for the money. The second reason I was wary of this is that Wan had previously helmed “The Conjuring“, a fantastic ghost flick which seemed like a good way to finish off this subgenre of horror. In fact, I might even argue that it was the best of the current ‘haunting’ trend. How did he expect to top that? Everything about “Insidious: Chapter 2” felt unnecessary from its conception and now that I’ve witnessed the film, I still believe it was unnecessary. But at the same time…I can’t deny that I enjoyed myself.

“Insidious: Chapter 2” is much lighter in tone than its predecessor, even to a point where I’d sometimes find myself wondering if this was some sort of parody. It constantly seemed like corpses were making their best ‘derp’ faces and the over-the-top mannerisms of certain ghosts were just goofy. What’s strange is that when “Insidious: Chapter 2” wanted me to jump, I usually did so despite forcing down a laugh at the same time. The comedic relief duo from the first film make their return, but I thought they were significantly funnier this time around. They had two standout, humorous moments which continue to make me smile whenever I think of them. There were a few times though when I wondered whether the actors were taking the dialogue seriously. Some of the cast members look like they’re trying to suppress a smile and I suppose this leads to my biggest complaint regarding “Insidious: Chapter 2“. The acting and dialogue often felt off. No one is consistently terrible, but everyone seemed to have moments where I would roll my eyes as their performances. The dialogue is often trying too hard to be memorable, but it’s either recycling lines from the previous movie or it just sounds silly when spoken aloud. I often felt that the actors weren’t getting enough direction, so had no idea how to play the scene. But back to the more comedic elements, you’re either going to appreciate the sense of humor or you’re going to think it ruined the feature. I was fine with it, but I have to admit that it took some time getting used to. But there is always a ‘but’ and this ‘but’ is that I never felt any of the characters were in any real danger. The lighter tone ended up softening the tension, making “Insidious: Chapter 2” seem oddly safe. Maybe that was the point. After all, cynicism has become a cliche in horror films. 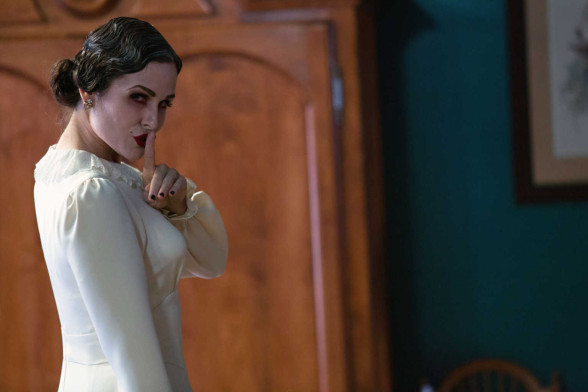 Ever since “Paranormal Activity” popularized its slow burn style, it has become a staple of the genre that the meaty stuff doesn’t occur until the half way point. Good or bad, these movies usually do take quite some time to get started and “Insidious” was one of those movies. This isn’t a criticism, but if you thought “Insidious” was too slow, then you might be pleased to know that “Insidious: Chapter 2” is one of the fastest paced, modern day ghost movies. It doesn’t spend much time building up the situation or fleshing out the characters, probably because this is a direct continuation of the first one.. But almost immediately, “Insidious 2” breaks its narrative in half. You have the focus on the family, who begin hearing creepy noises and seeing ghastly apparitions within the first 10 minutes. But a lot of screentime is dedicated to the mystery, where the Mother (Barbara Hershey, who has an expanded role) and the two goofball experts try to figure out what is going on. There definitely is a healthy amount of padding, but at least the padding tends to involve the characters encountering something freaky. Therefore, even though “Insidious: Chapter 2” is almost 2 hours long, I never became bored or impatient. The story itself is an expansion of its predecessor. I liked where it went in certain areas, even if they probably should’ve explained certain twists more clearly. Certain events are explained using cryptic dialogue, suggesting we shouldn’t think too much about it. But I did think about it…So I scratched my head in confusing quite often. The script had some good ideas though, which were used effectively. I liked the ‘reverse haunting’ concept. I still don’t think any of this was necessary, but at least Leigh Whannell tried his hardest to make the script compelling.

But is “Insidious: Chapter 2” scary? Sort of. With the exception of the limp opening scene, I was usually drawn into the horror set pieces. When I would hear a piano playing in the background, I would become still in anticipation. Whenever a ghost appear in the background, I would suppress a gasp. Whenever a ghost would pop out of nowhere, I would be startled. The problem is that it never surpasses or even matches “Insidious” in the scare department. That movie made me jump MORE, made me shudder MORE and made me dig my fingers into the armrests MORE than this sequel did. In general, I just felt the original had more style and left a bigger impact. The visuals in this film are still pretty freaky, but they pale in comparison to the previous film. My biggest fear regarding “Insidious: Chapter 2” was that Wan used up all of his ideas on how to scare the audience using ghosts when doing “The Conjuring“, which turned out to be true. This one just seems to be running off of creative fumes in comparison. Luckily, James Wan is a talented enough director to where he can continue to provide the chills. But it doesn’t appear he made this out of legitimate inspiration. I still suspect money was the driving factor behind Wan and screen-writer Leigh Whannell signing on for this sequel, but at least they’re good enough at what they do that the finished project doesn’t suck. “Insidious: Chapter 2” is at least consistently entertaining, if anything.

Violence: PG-13 worthy. Most of the violence is left to the imagination.

Overall: “Insidious: Chapter 2” is worth watching if you’re a fan of the first one, but I can’t guarantee you’ll like it yourself.