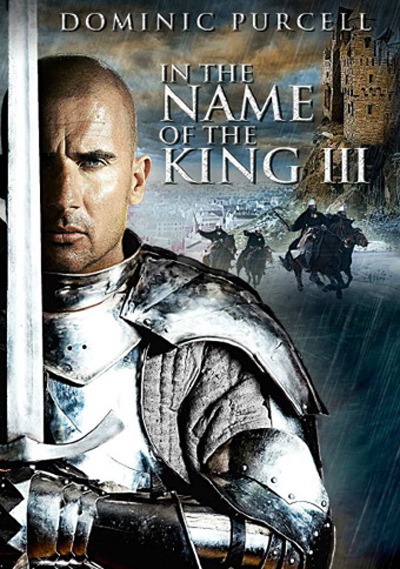 Plot: A hitman named Hazen Kaine (Dominic Purcell) is transported back in time to the middle ages because…magic…and has to overthrow a bloodthirsty King and slay a dragon.

I have to confess that as soon as I saw that they actually made a “In the Name of the King 3“, I got a little giddy. After all, “In the Name of the King” was a…*snicker*…masterpiece…*snicker*, where Jason Statham provided a powerhouse performance- if by powerhouse, you mean ‘spent the previous night doing some hard partying and woke up next to an ironclad Uwe Boll contract that boasted Statham’s signature’. What? That’s my definition of amazing acting. Obviously that would be a hard epic to follow, but wisely “In the Name of the King 2” took the artistic route. When we saw parked cars sitting next to cardboard castles during scenes which were supposed to take place during the middle ages, Uwe Boll was clearly using symbolism to show how the King was really a phony who would be a politician in modern day society. The phenomenal…ohmygodthisissohardtosay…cast was headed by Dolph Lundgren, whose preparation for his outstanding performance was getting so stoned that he seemed to completely forget where he was….surely, representing- Okay, fine. I’m done. These movies sucked, but they did have SOME elements that allowed me to laugh at them. Honestly, “In the Name of the King 2” had aged so well in my mind that I almost had convinced myself that it was a ‘so bad it’s good’ kind of experience. But when I went back to read my review, I was surprised at how negative I was. This is because my mind only retained the ‘so bad it’s good parts’, which didn’t embody the entirety of the movie, and excreted the ‘so bad it’s boring parts’, which did embody the majority of the movie. Luckily, my mind is free to completely shit out the third entry in this unnecessary franchise, because it will retain nothing. “In the Name of the King 3” is a step up from its predecessor on a technical level, but it’s still a full fleet up stairs short of being good…or even tolerable…Worse, it had nothing I could even laugh at. IT’S SO BORING!

It’s never easy reviewing an Uwe Boll feature, because the badness invades every aspect of the filmmaking. Where do I start? I guess I can begin with the story, which can best be described as…shit. To elaborate, it feels like Uwe Boll is ripping off already familiar plots and splicing them together without even trying to build a narrative upon his Frankenstein-like assembly. Hazen Kaine is a hit-man who is described as the best, which is hard to take seriously when he leaves his finger prints at a crime scene and almost lets two little girls escape even though they’re right next to him. He has a tattoo which resembles a mystical artifact that one of the girls has, which sends him back in time. The tattoo freaks out the villagers, who says only their dead King had such a marking. They inquire how he got it and he says it was from his wife, but it’s never clear what her relation was to the King. Was she a descendant? Wait, wasn’t Hazen’s love interest supposed to be the King’s daughter? If that was the implication, then creepy. But it’s unclear. Uwe took two clichéd ideas and failed to even explain their connection. Actually, most of the important information is barely glanced over. Everyone talks about the prophecy, but it’s so vague that I’m not entirely sure what it was. The bad guy has a medallion that can control the dragon, because…magic? He speaks of being betrayed, but what was the betrayal? It feels like Uwe Boll figures we know the movies that he’s stealing from, so can fill in the blanks ourselves. Now that I think about it…the hero is a bad-ass who still grieves over his dead wife, is sent back in time but loses his gun almost immediately, insists that ‘this isn’t my fight’ and everyone follows him based on a vague prophecy…I almost want to accuse “In the Name of the King 3” for being a stealthy remake of “In the Name of the King 2“, as they have the exact same story ingredients. Naturally, don’t expect any of the character development or the love story to make any sense. Hazen decides to be good because…cliché. The girl falls in love with him because…cliché. I will confess that the finale involving the dragon was a little different, but only in that “In the Name of the King 2” did not contain any modern day dragon action…Yet other films have used that same idea, so…poo…This script sucks! 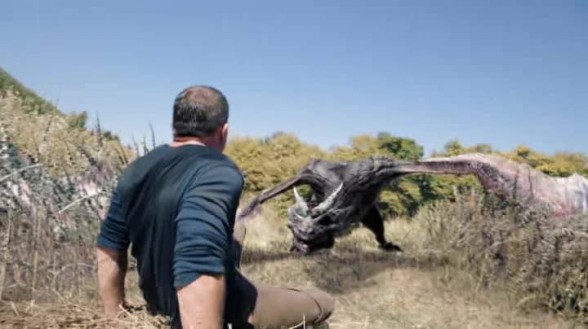 Even though “In the Name of the King 3” is a low budgeted flick, even $1,000,000 shorter than its predecessor, it seemed to utilize its money better than “In the Name of the King 2” did. Maybe Dolph Lundgren commanded a higher salary than I thought, but the castle actually does resemble a castle…Not big enough for me to buy as the King’s castle, but it’s nowhere near as embarrassing as the set from the previous film. But there are also fewer locations, since most of the action takes place in the forest, so you’ll get tired of these sets quickly. The CGI was bad, but I won’t hold that against a film that obviously cannot afford a better dragon. The lack of extras is very noticeable. I found it odd that the King would continuously kill his henchman, when he only seemed to have a dozen working for him. These armies aren’t very impressive… The action scenes were very poorly choreographed, shot and edited. At first, I would just be annoyed at how I could barely tell what was happening, but then I started to get bored. Even though the battles are weak, they do go on for WAY too long, so the pacing is all sorts of mucked up. Nevertheless, “In the Name of the King 3” does feel like a bigger production than the previous film, with fewer scenes drawing attention to the cheapness. That doesn’t make it a nice looking movie though. It’s just that Uwe Boll has done worse. “Bloodrayne III” is so aesthetically unpleasant that it starts to resemble a bad student film. “In the Name of the King 3” could afford better cameras, so at least it just resembles a bad direct-to-DVD film. Uwe Boll seems to have lost all interest in the filmmaking process. In the past, he was usually over-enthusiastically hyperactive when it came to delivering a style, which usually resulted in garbage like “House of the Dead“, although every once in awhile his hand would steady and he would show legitimate talent (“Tunnel Rats“). These days, Uwe Boll is obviously more interested in getting the project done than he is in putting his stamp on the film. His direction is very uninspired and I’m pretty sure Uwe was rushing through the production. Maybe he lacked the time and resources, but it seems like all of films lately reek of indifference from the director. This means “In the Name of the King 3” is less likely to annoy you on the same level as “Alone in the Dark“, but you’re also less likely to remember it. As awful as Uwe’s earlier works were, at least they do have a place in the realm of cinema, even if they’re located in the ‘abominations’ section.

Now we come to the acting and the dialogue, which is as terrible as you’d think it would be. The attempts at comedy fell flat, primarily because we’ve seen these same jokes before- usually with much better delivery. Hey, modern day guy can’t ride a horse! HILARIOUS(not)! THAT SCENE GOES ON FOREVER! The dialogue once again tries too hard to sound old fashioned and they don’t even bother with covering up the exposition. For absolutely no reason, characters will start talking about important plot points. The best part of watching “In the Name of the King” or “In the Name of the King 2” was being able to see the action stars look so humiliated for being there. I might make fun of Dolph Lundgren’s performance, but I’m GLAD it was so bizarrely terrible, because it provided a small amount of sorely needed entertainment which I wouldn’t have gotten out of good acting. So after seeing hungover Jason Statham or stoned Dolph Lundgren, did “Prison Break” star Dominic Purcell give me something to laugh at? At first, I actually was impressed with his presence. He is a pretty imposing guy, but once he gets transported back into time, he’s more ironic and his character is played for laughs. It was then I realized that Dominic Purcell was just bored. Whenever he delivers any line or conveys any…lack of emotion, he seems to be thinking about how he is going to spend the money Uwe paid him. His delivery is just as bad as his predecessors, but its nowhere near as hilarious. I was hoping that fake Josh Brolin (Marian Valev) would provide the much needed ham as the villain, but while he’s properly over-the-top, he isn’t in the movie very much. Fake Christopher Lambert (Nikolai Sotirov) also could’ve potentially been fun, but he’s also underutilized. Everyone else seems embarrassed to be speaking their lines, but I could never bring myself to laugh at them. I’m pretty sure those kids are the cause of diabetes. Ouch, they weren’t very good child actors, but Uwe Boll REALLY tries using them to draw emotions out of the audience. The interesting bad actors are barely present, whereas the boring bad actors get all the material…Yawn. 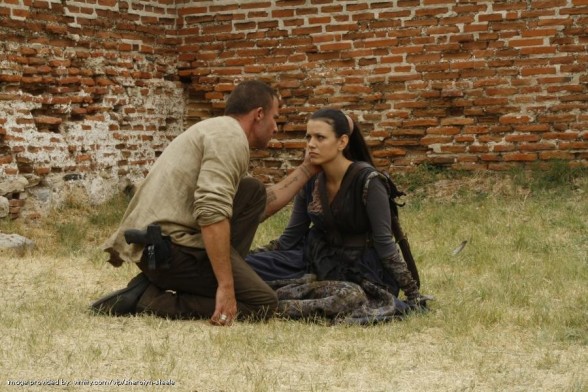 This is a pretty shitty trilogy to begin with and if you’ve never seen a “In the Name of the King” movie, I certainly wouldn’t advise you to pop that cherry. “In the Name of the King” ranged from mediocre to crap and “In the Name of the King 2” ranged from crap to needing a plunger, but both occasionally provided an unintentional laugh that overshadowed the actual quality of the films. As I’ve said, the laughable parts stayed with me, while I had forgotten the rest. But “In the Name of the King 3“, while never reaching the low points of its immediate predecessor, never entertained me on any level. It’s just boring. The sad thing is that Uwe Boll was showing genuine improvements as a director since falling to the land of ‘direct-to-DVD’ cinema. I didn’t like “Postal“, but it has a following and “Bloodrayne 2” was at least superior to “Bloodrayne“. “Seed” and “Tunnel Rats“, in my opinion, were criminally underrated. “Rampage” even got positive notices by some of Boll’s fiercest detractors. But they didn’t get the notoriety of Boll’s theatrical releases, which meant few people noticed these films at all. Some agreed that Boll had improved, but felt that he had merely advanced to ‘bland’. Maybe that’s why Boll gave up, but none of his more recent efforts (that I’ve seen)- such as this- have captured the attention of the masses either. At least his more infamous anti-masterpieces showcased a kind of warped vision, which made the badness into something unique and memorable (even though I never enjoyed them). Now Uwe Boll has gone the Steven Seagal route. He doesn’t care about making movies, he just wants to collect the pay-check, phone it in and move on. That level of filmmaking is far more unforgiveable than anything Michael Bay, M. Night Shyamalan or Roland Emmerich is capable of.

Violence: Rated R, I guess. Nothing stands out, but there are some stabbings.

Overall: “In the Name of the King 3” sucks. Don’t watch it, even if you did get some enjoyment out of its predecessors.