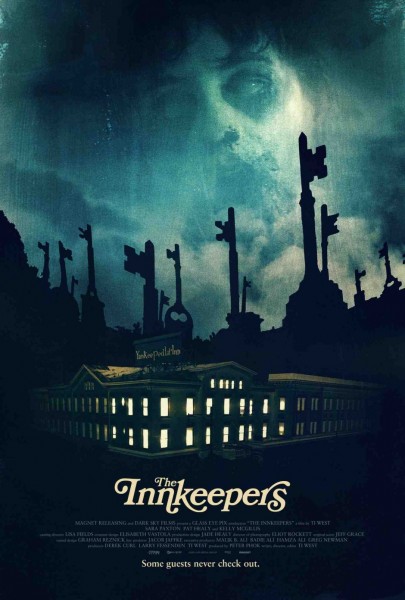 Plot: The Yankee Pedlar Inn, which is alleged to be haunted, is finally closing down. Claire (Sara Paxton) and Luke (Pat Healy) are the only two remaining employees and they have to watch the place for its final weekend. Both want to spend their remaining time searching for evidence of the paranormal and since this is a horror movie…they’re probably going to find it and the experience won’t be very pleasant.

“MartialHorror, watch “The Inkeepers”. It’s scary”, “MartialHorror, “The Innkeepers” is the best horror movie of the decade”, “MartialHorror, “The Innkeepers” is a return to old school horror” and “MartialHorror, God damn it are you sexy!” are things I tend to hear at least once a week. Director Ti West has developed quite the following on the direct-to-DVD market. He did “Cabin Fever 2”, which is often considered superior to its predecessor. I haven’t seen it, but I did watch “House of the Devil”, which was lauded despite 90% of its screen-time being dedicated to a hot chick, slowly walking around a house. It’s funny that the “When a Stranger Calls” remake did the same thing, but everyone loathed it. Of course, I say a lot of this in jest, because “House of the Devil” made ‘slowly walking around a house’ surprisingly chilling. “The Innkeepers” reprises this brand of terror, but I didn’t think it was nearly as effective. I can’t say I cared for the movie, but I will concede that I can see its appeal.

“The Innkeepers” isn’t a parody and I don’t even want to refer to it as a satire. Yet the film doesn’t seem to be taking itself very seriously. For example, Claire investigates a mysterious scratching sound coming from the basement and when she opens the doors, a bird flies out. It’s a jump scare, but focuses more on Claire’s goofy sounding scream than the startling appearance of the animal. Either Sara Paxton’s acting is just that abnormally bad (more on that later), or “The Innkeepers” intended for us to laugh and jump at once. In fact, everything is so over-the-top during the first half that it has to be toying with us. At one point, a mysterious man checks into the room and he acts like he’s not completely there. I’m surprised he didn’t start making ghost noises (“ooooh, I’m a ghooooooost”), because he doesn’t seem human. It’s so blatant that I refuse to believe the movie was intending to scare us. The first half (or even 2/3’s) of “The Innkeepers” is more quirky and strange than spooky. Is this a good or a bad thing? 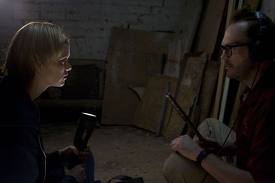 If you’re not a follower of these kinds of haunted house films, I don’t think you will see any of it as funny. You will just dismiss it as corny, or damn it for its offbeat acting. It’s so subtle with the humor, that the only way to ‘get it’ is by being a hardcore fan. With that said, my problem wasn’t with this. I took more issue with the characters. So much time is put into its cast of potential victims, but these interactions were unpleasant to sit through. Claire is annoying and tends to do moronic things. This offends people, who act incredibly rude to her. It just made me dislike everybody. Some of these subplots don’t even go anywhere, like the whole thing with the bitchy Mother. What was the purpose of that, other than to kill time? As for the acting, I liked Pat Healy (he was funny), but Sara Paxton was….odd. She reminded me of Zooey Deschanel in a way, but it wasn’t cute to me. You might think she’s adorable though. 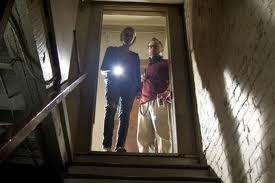 The majority of the film is dedicated to the characters accidentally scaring themselves. The actual supernatural threat doesn’t show up until late in the film and yes, it was rather creepy. The build up was pretty nerve wracking and the ‘basement’ scene was heart pounding, which is impressive considering you don’t see anything explicit. The finale has West properly utilizing the foreground and background together. The camera will linger on a person and we will see something unsettling in the distance, whether it be a shadow or a ghoul. But by this point, it was too late for me. I didn’t like a lot of the first half, so I was already losing interest by the time the film started being scary. But if you do like “The Innkeepers”, I understand why. At the absolute least, it takes a tired subject and makes it unique. When I complained about how conventional paranormal movies have become when I reviewed “Sinister”, I was not referring to “The Innkeepers“.

Overall: I suppose “The Innkeepers” is worth watching, but beware of the hype.