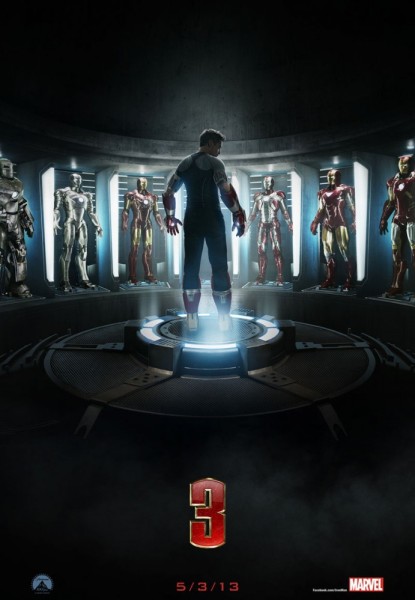 Plot: Tony Stark (Robert Downey Jr) puts back on the Iron Man armor in order to stop a ruthless terrorist known as the Mandarin (Ben Kingsley).

I’m beginning to suspect that “Iron Man” set the bar too high, as none of Marvel’s cinematic followups have come close to matching it in overall quality. Well, okay, maybe “The Avengers” did. But that relied on a gimmick, even if it used said gimmick masterfully and I don’t think I can truly view it objectively without prematurely having a fangasm. But “Thor“, “Captain America“, “The Incredible Hulk“, “Iron Man 2” and now even the much hyped “Iron Man 3” pale in comparison to “Iron Man“. I’m not saying “Iron Man 3” isn’t good, it’s just that I expected more from it. I suppose it got the most important elements right. The special effects continue to get better and better. Shane Black is potentially a better action director than Jon Favreau, who helmed the previous two films. I thought the action scenes were more exciting and diverse. “Iron Man 3” also contains the most bombastically amazing finale of the trilogy, with the final fight being the best among the ‘last battles’ of the trilogy. Even more importantly, “Iron Man 3” is hilarious. Or more specifically, Robert Downey Jr. as Tony Stark is hilarious. The man just has such great dialogue to use and his delivery provides maximum laughs. If you were concerned that “Iron Man 3” seemed too grim based on the trailers, fear not. It’s just as comedic as “Iron Man” and “Iron Man 2“. Despite being over 2 hours long, I thought the movie moved at an effortless pace. “Iron Man 3” is entertaining. I apologize in advance if I appear to be nitpicking or if this review is lopsided with complaints, but everything I’m about say effected MY enjoyment. Please consider my words carefully, because what bothers me may not annoy you. The above praises alone makes “Iron Man 3” worth watching, but I can’t say I was completely satisfied.

Phew, this is going to be difficult. When I attack a film for its faulty narrative, usually I aim for objectivity. “Captain America: The First Avenger” spent too much some on building up the situation and then expected us to care for a bunch of characters whose only indistinguishable trait were their races. It was flawed because the script didn’t give much time to flesh anyone out enough for the viewers to make attachments. I can say that with conviction, but I am a little insecure accusing “Iron Man 3” of the same thing. Why? “Iron Man 3” didn’t give me what “I” wanted. That’s very personal, but maybe I can elaborate more… Based on the trailers, you’d think that the story would be about the Mandarin trying to kill Tony. Yet the majority of the conflict is between the Mandarin and the U.S Government, with Stark only getting involved when a friend becomes ‘collateral damage’. Even when Stark enters the fray, the ‘big plans’ seemed more reserved for the Government. All the baddies do to Tony after blowing up his house is send some thugs after him. Stark, in turn, solves a mystery that we’ve figured out from the beginning. This is not a very sturdy narrative…I was hoping that the majority of the story would focus on the feud between Iron Man and the Mandarin, who could’ve easily been the most threatening foe to date. I wanted the rivalry between Iron Man and the Mandarin to resemble Batman’s struggle against the Joker from “The Dark Knight“. That alone would’ve provided a lot of tension, but here is what happens instead. The Mandarin blows shit up. The Government promises to stop him, but are too stupid to do anything. Tony Stark wants in on the action and announces his intention to stop the Mandarin. The Mandarin proceeds to swat him away like a fly by blowing up his home. This undermines Tony as if that was all it took to take him down, why hasn’t anyone tried that before? Is it that easy to send a missile wielding chopper to blow up the home of an icon? WHERE WAS THE GOVERNMENT IN ALL OF THIS?! While Tony tries to figure everything out and dodge the occasional assassin, the Mandarin turns his attention back to his original threat. I never felt that the Mandarin- or any of the villains- was a legitimate threat. They only got as far as they did because the Government is portrayed as incompetent and Tony’s emotional issues have clouded his judgement. I suspect that might’ve been the point. Tony’s greatest enemy isn’t the Mandarin, it’s himself. But more on that later… 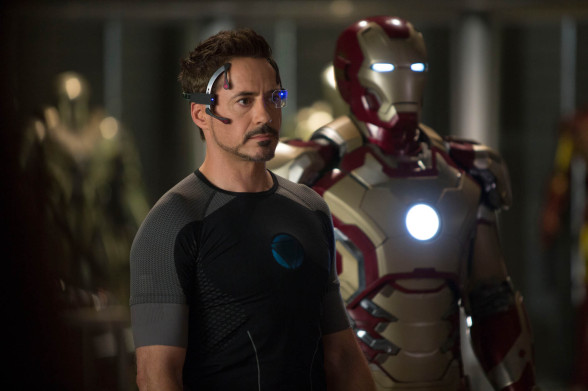 An issue I had with “Iron Man 2” was that even though Mickey Rourke was the main antagonist, he’s a background character throughout the bulk of the film. It seemed like more of the movie was about the conflict between Tony and Justin Hammer (Sam Rockwell), whom we weren’t supposed to take seriously. While there was a legit threat during the 1st and 3rd acts, the middle block lacked suspense because Hammer wasn’t dangerous enough. Here, the movie gives more screen-time to the various, uninteresting thugs that are sent after Tony. The Mandarin remains in the shadows, but for some reason, his presence seemed absent. Maybe this is because throughout the bulk of the screen-time, the Mandarin wasn’t interested in Tony? I don’t know, but I know that I didn’t like what they were doing with the story. Even worse, the middle block focuses on Tony’s relationship with a kid. Actually, I have to admit that the kid was surprisingly amusing. Their banter made these scenes watchable- maybe even enjoyable- but this subplot wasn’t necessary. I would rather Tony spend more time with Rhodes, or Pepper or…hell, I’d even take Happy. Since the character or story arcs aren’t based around this kid, he didn’t deserve that much screen-time. There are many twists, some having already achieved notoriety and…I can see the outrage. In its defense, at least I didn’t see it coming and the big reveal was pretty hilarious. But it also represents my primary issue. None of it is done poorly. The twist has good foreshadowing, is surprising and the pay-off is amusing. But it’s just not what I wanted. “Iron Man 3” took its story in a direction that I disagreed with. In my own defense, the marketing campaign deserves much of the blame. They stressed the Mandarin/Tony Stark rivalry to such an extent that they even included dialogue that wasn’t even in the film. It frustrates me because I can’t even properly explain myself without spoiling anything.

The character arc wasn’t as strong either. I have to give both “Iron Man 2” and “Iron Man 3” credit for resisting the urge to rely on its villains. They are always about Tony Stark. The previous film had moving- even inspiring- character development as Tony battled alcoholism, self doubt due to his failed relationship with his Father and his own mortality. His internal struggle was clearly written, yet not dumbed down. I didn’t understand Tony’s problems during “Iron Man 3”. His near death experience in “The Avengers” has traumatized him, but…why? He’s been in plenty of near-death situations before. Hell, Iron Man was BORN from a near-death experience. Is it his fear of losing those close to him? A lot of dialogue is dedicated to him protecting Pepper. But then maybe they should’ve spent more time on that then having him spend more time with some kid who he just met. I liked the concept of his relationship with his armor, but they didn’t do enough with it.

Ugh, this is becoming maddening. Even when I was pulling out my hair- even though I’m bald- while watching the flick, I can’t say I ever disliked it. It’s the equivalent of debating politics with a friend who just happens to not share your own beliefs. Sure, it might get heated. You might argue and it could get intense. But if you’re good friends, it won’t necessarily sever your relationship. I enjoyed “Iron Man 3“, but whenever I talk about it, I feel compelled to complain about what I did not enjoy about it. My expectations were just too high and the trailer was promising something that I didn’t get. Maybe once my initial feelings wear off, I can appreciate it more than I currently do. But for now, me and my friend just have to accept our differences. Maybe I will start to agree with him in the future, but only time can tell. “Iron Man 3” is a worthy addition to the Marvel Cinematic Universe, but don’t expect one of the better entries.

Overall: “Iron Man 3” is in the same league as “Iron Man 2“, but I’d still say its inferior. It was an enjoyable- but highly frustrating- experience.