Plot: A scientist (Claude Rains) has discovered a way to become invisible, but he can’t reverse it and it starts to effect his sanity. He becomes a murderous psychopath, eluding the police because he’s too smart and they are unable to see him. How can he be stopped?

“The Invisible Man” is probably one of the best horror movies of its age, because it defied conventions and was driven by ambition. Oh sure, it has plenty of flaws that came with its time period. The acting ranges from stiff to theatrically over-the-top, because most film actors had come from the stage and that is what they knew. A lot of the dialogue, especially when it comes to exposition, is clunky and forced. Naturally, there always has to be a tacked on love interest who always has a phony scene where she turns away dramatically and cries. You are practically guaranteed to roll your eyes at the movies idea of comedy. I nearly turned it off when the Innkeeper’s wife started shrieking. God, that was really annoying. Yet it either got better or I became used to it. “The Invisible Man” is also dangerously clever to where I almost wonder how it got past the censors.

Back in the 1930’s, we had Dracula and his mystical powers. We had Frankenstein and his freakish strength. We had the Mummy and his uncanny ability to make boring and overrated classics surrounding him. At the time, these monsters terrified people, but there was always a safe haven. Dracula was vulnerable to sunlight, so you could ambush him during the day. Frankenstein is rigid and slow, meaning you could outmaneuver him. You could choose to not watch “The Mummy“, therefore saving you from true terror. But how do you take on an Invisible Man? You can’t see him coming and won’t even know he’s there until his fingers are around your throat. He has the strength to throttle you with only a little struggle and he’s incredibly smart. Perhaps more disturbingly, he knows all of this and is ambitious enough to abuse his powers. He even explicitly acknowledges that he could get away with rape- pretty shocking for the time- although he never actually does it. It’s a chilling concept. Once he loses all traces of sanity, he goes on a murder spree that makes all of the other movie monsters seem small scale in comparison. He even derails a train (!!; surprisingly solid effect). “The Invisible Man” is never scary, but I imagine that it would’ve terrified its audiences in its day. Even now, I thought it was pretty startling. 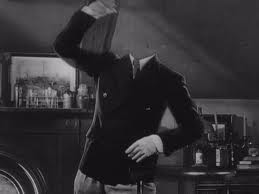 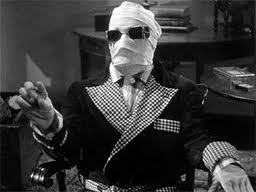 The ‘yuk yuk”s eventually cease being obnoxious and start becoming dark. At first, the Invisible Man is more of a prankster and we laugh with him as he torments the locals in mundane ways. But the tone takes a more cynical edge and it makes some of the sillier moments sort of creepy. An investigator tells the locals that there is no invisible man and we laugh when our villain-protagonist dumps ink on him. This is immediately followed with the Invisible Man beating the poor cop to death. He delivers plenty of witty one-liners as he kills someone. The line’s themselves are pretty funny, but they become sort of creepy when you consider what he’s doing. The film also toys with our expectations, especially when it comes to Kemp (William Harrigan). One scene establishes that he’s in love with Gloria (Flora Cranley), who is engaged to the Invisible Man, and we presume that he will be the hero. That’s how every other film made in this era was. It turns out, he’s not very heroic and I was shocked at the path the movie took him down. We’re not entirely sure whether or not we should sympathize with the Invisible Man either. He’s pitiful in one moment and a complete monster the next. He’s charismatic and charming (Claude Rains deserves heaps of praise, considering you don’t even see him), but his actions are unforgivable. I’ve always believed that the best villains are ones who are more ‘human’, because it makes their actions more horrifying. Frankenstein and Dracula, one who is sympathetic and one who is not, aren’t human. They’re monsters, doing what nature designed them too. We are supposed to feel bad for Frankenstein or the Wolf-Man, but the Invisible Man is not so easy to figure out. I personally loved to hate him.

I’m probably going to be very generous when it comes to the rating, because “The Invisible Man” really surprised me. It was daring and bold, dealing with a chilling subject matter that plays out as a black comedy. It completely goes against the grain, but retains the class and respectability that accompanies these older films. The special effects are mostly spectacular too. When he first reveals himself, I was wondering how in the hell did they pull this visual off in the 1930’s. A modern day adaptation (like “Hollow Man“) isn’t as impressive because we’d immediately know how they made the actor invisible. Gone is the mystery that accompanied cinema before CGI took over. Even though it took some getting used too, “The Invisible Man” ended up captivating me and is a joy to write about.

Overall: If you like the old classics, you’ve probably seen “The Invisible Man“. If you’re open minded to the horror films of old, give it a look. I personally loved it.