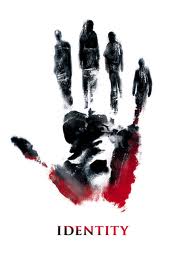 Plot: A group of strangers find themselves stranded at a desolate motel, during a nasty rainstorm. Then someone starts to kill them off, one by one.

In the past, my tastes have been criticized for being ‘poor’. Sure, “Carnosaur” is one of my favorite movies, I’m addicted to direct-to-DVD Stevean Seagal features, I adore zombies, slashers and I’ve given passable ratings to low brow actioners. But amidst my adoration of blood and boobies, I have acquired the taste for good, cerebral mysteries. I’ve recently developed an obsession with Agatha Christie’s works (or more specifically, the adaptations of said works) and the films that likely drew inspiration from them. “Murder on the Orient Express”, “The Last of Sheila” (which she didn’t write, but might as well have) and “And Then There Were None” rank among my personal favorites…along with “Carnosaur”, of course. “Identity” is based on “10 Little Indians”, which spawned my beloved “And Then There Were None”, although it’s not a direct adaptation. So naturally, I almost have to squeal like a little girl at the prospect of its existence. “Identity” is definitely a strong film, a must see for fans of horror, thrillers or mysteries. But something about it keeps it from reaching perfection. So lets dig out our Sherlock Holmes outfits, peer into the iconic magnifying glass and deduce what makes it so good/flawed.

“Identity” delivers a solid set-up, introducing the people, their situations and how they happened to end up at this crusty motel. There’s nothing especially inspired when it comes to their characterizations, but the actors add the right amount of substance to their characters. It’s important for an Agatha Christie-esque movie to have two things: A powerhouse cast and classy dialogue. Here, we have John Cusack, Ray Liotta, Amanda Peet, Alfed Molina, Jake Busey, Clea Duvall, John C. McGinley, John Hawks and plenty of other recognizable faces to admire. Everyone does really good, but I’d probably praise Cusack, Liotta and Busey the most. Busey is freaking creepy, causing me to shiver every time he’s on screen. Liotta gets to play an ambiguous badass without being obvious about it. Cusack surprised me, as I usually don’t care for him in leading roles. But there is an inner strength and intelligence about him that makes him a captivating lead. The good thing with a cast like this is that the deaths become a little more unpredictable and the interactions are very intriguing. Watching everyone play off each-other kept my interest high, even when people weren’t dying. There’s nothing particularly memorable about the dialogue, but it is still a cut above most movies. 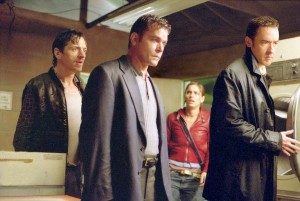 I LOVE how Mangold chose to direct this movie. The thick rain provides a moody, bone chilling atmosphere that never really lets up. There’s something inherently creepy about trekking about in the heavy rain, knowing that there might be someone watching you. There’s also the dense feeling of isolation, since everyone is obviously….isolated. The suspense is high, thanks to the ominous sounds and still camerawork. The direction is relatively simple, but it had a maximum impact on me. The kills are violent, but not excessively sleazy. When something especially horrific happens (the bat), it freaks you the fuck out because the violence isn’t numbing. “Identity” was carefully crafted in this regard, being old school but never old fashioned.

The script is very ambitious, which is baffling when you remember that the writer also penned those bad (but not unenjoyable) “Jack Frost” horror films. Throughout the movie, you begin to suspect that there is something more going on than just a killer… killing people. But is there a supernatural element going on? Psychological? Paranormal? What is it?! This is where things began to fall apart at the seams. For my money, the ‘big’ twist was way too obvious. I think the main problem with “Identity” is that the filmmakers don’t want to be accused of pulling twists out of their asses. The foreshadowing blatantly tells us what to expect. They reveal too much early on (everything involving Alfred Molina) and we can’t figure out why else it would be showing us all this information on dissociative identity disorder unless the movie is going down a specific route.

Smaller twists are easy to deduce because the film will show us something important, but the other characters will never catch on. I complained about this in 2011’s “The Thing” prequel. Imagine this. Every time the characters suspect someone, we are supposed to join in on the suspicion, but it’s barely hiding the fact that we are witnessing a red herring unfold. Yet “Identity” will show us- the audience- a glaring clue, which offers only one explanation: “This character is likely guilty“. This cheapened the story, as every time they would accuse someone, I would constantly remember the previous clue that would vindicate them. Even though “Identity” deserves a lot of credit for its big ideas, the writer chose to treat its audience like morons and spell everything out for us. On the flip side, the ‘final’ twist did throw me off. The ending was likely ripped off for a “2010 movie that I criticized”, but I do think “Identity” did it better. I didn’t feel cheated. I just felt it could’ve been a tougher mystery that forced us to use our brains.

Despite correctly guessing most of where “Identity” would go, that never made the experience any less compelling. I enjoyed watching the characters try to solve the mystery and cringed whenever one was in peril. It’s a good horror movie because its creepy, a good thriller because it’s suspenseful and even a good mystery because it’s fairly intelligent. It’s only major weakness is that it could’ve been smarter. Well, that and some of the characters decisions did annoy me. I can’t stand it when panicked characters think that running out of a crowded room alone is a good idea. But that is a minor gripe because the characters usually are more logical than that. “Identity” was a cool film, but I can’t bring myself to call it ‘great’. Instead, it’s….almost great?

Nudity: There is some sexuality, but nothing explicit.

Overall: “Identity” is definitely worth a watch. If you disagree with me and consider it to be great, then good for you!