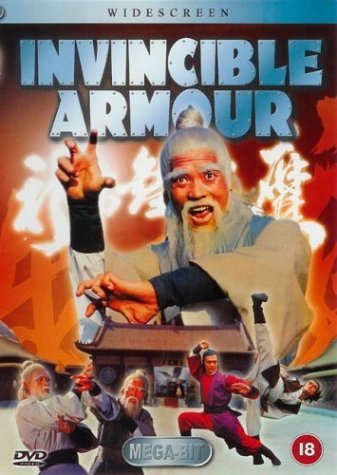 Plot: Er, this is not going to be easy to describe. General Chow (John Liu) is framed for the murder of his superior and has to catch the real killer. But it’s not going to easy as he must dodge a variety of assassins and uncover a conspiracy.

I don’t think I’ve ever been more lost when it came to the plot of a kung fu movie in my life, and I’ve seen “The Killer Meteors”. It’s never easy understanding convoluted stories when the movies were produced in a country that’s not your own, but everything about “The Invincible Armour” confused me. It had a story that’s full of betrayals, revelations and twists. But it’s often hard to tell the actors apart because everyone looks so alike (no, I am not being racist). Example, every time one of those two brothers with the long, white hair would show up, I would find myself wondering which one was the bad one. My mind exploded when they appeared in the same scene together. The audio for the dubbing was terrible, but in a way that made me laugh. Yet sometimes it really sounds like they had one or two people doing all of the voices without trying too hard to sound different. Either that, or everyone just happens to sound alike. Perhaps the shoddy audio teamed up with my poor hearing and together, their combined forces were too much for my analytical skills. But I was constantly scratching my head whenever a character would make a plot changing decision or whenever a new person would randomly show up. By the time an assassin -who was dressed like he had just come back from Disney Land- showed up to challenge our hero, I just shook my head in comprehension and admitted that I was not understanding this story. Amidst all of this jargon, they somehow throw in a love interest and a way to counter the ‘invincible armor’ technique that the main antagonist uses. The script is very messy. So why is “The Invincible Armour” considered a classic? I don’t think it’s that good! But I do like this movie and please continue to read if you want to know why.

Every time I found myself blinking in exasperation, I would be distracted by a fight scene. Now don’t get me wrong, there is nothing spectacular about the present choreography, even if this was pretty solid work for the time. The kung fu is average and it’s hard not to grimace whenever someone would drop their hands or hunch awkwardly. But it seems to get better as it moves along and its protagonist happens to have a very different style. I know nothing about the actor, but I am going to guess that he’s a taekwondo fighter. His (high) kicks are quick, flashy and contrasts very nicely with the more traditional kung fu. John Liu might lack the charisma of Jimmy Wang Yu, Bruce Lee or Ti Lung, but he has a charm about him and his acting isn’t half bad either. He made for a compelling lead and his fight scenes, while occasionally sloppy, were at least fairly unique. Plus, if you have any issue with the quality of the choreography, the quantity makes up for them. It’s actually a surprise at how much story they crammed in here when 60-70% of the screen-time seems to be dedicated to action. 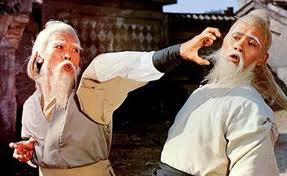 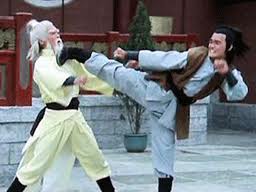 But do you know what’s more important than good fight choreography in these old kung fu movies? Being odd, eccentric, bizarre! Most kung fu films in the 70’s and early 80’s tend to be very indistinguishable. They all seem to have the same sets, hair styles, costumes, fighting styles, plots, etc. I know I’ve seen “Two Champions of Shaolin” and “Ten Tigers of Kwangtung”, but can I remember what either were about? Nope. But “The Invincible Armour” is just weird. It has a wacky score and a strange obsession with the male genitalia. The Invincible Armor is just a style where you can make your body invulnerable, but there is a weak spot. Guess where it is? The pay-off is as hilarious as it sounds. By the time an assassin -who was dressed like he had just come back from Disney Land- showed up to challenge our hero, I nodded my head in appreciation and admitted that while I did not understand the story, I didn’t need too. I was having fun regardless of that. It’s these little tweaks that give the movie its identity.

So “The Invincible Armour” isn’t an easy to clarify. For those who think it’s a kung fu classic, I’d have to point out that it hasn’t aged well. The choreography is often wooden and clumsy compared what we’ve got now. Hell, it was already outdated by the time the 80’s rolled around. The dubbing is…bad. If you try to argue that it’s not fair to judge a movie based on the dub, let it be noted that it’s not easy to find the subtitled version. The plot is all over the place and I had difficulty understanding it. But I have to concede that I enjoyed it. I liked watching the Taekwondo style of kicking placed against the traditional, cinematic equivalent of kung fu. You don’t see that often. Furthermore, the movie can’t go five minutes without some sort of fight or training montage. Most importantly, I shall remember the films oddities, which includes John Liu’s fighting style. With a genre like this, I tend to prefer ‘memorable’ over ‘good’, although I’d be even happier if I get both. “The Invincible Armour” isn’t a quality feature, but it is a lot of fun.

Overall: “The Invincible Armour” is worth a watch if you appreciate the 70’s age of kung fu films. If you find them to be tacky and obsolete, I wouldn’t bother.