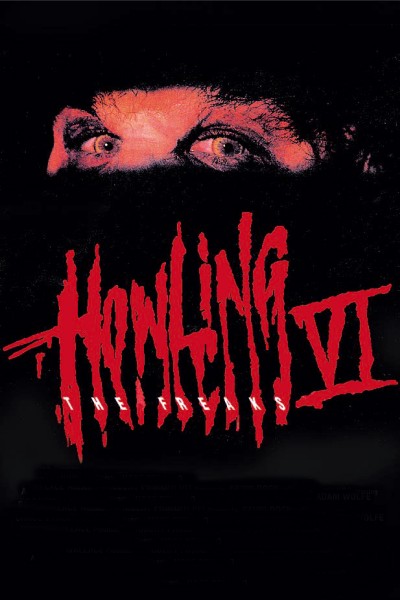 Plot: A strange drifter named Ian (Brendan Hughes) wanders into town, stalking a traveling circus troupe- headed by the bizarre Harker (Bruce Payne)- for mysterious reasons. It turns out that Harker cursed Ian using black magic, forcing him to become a werewolf whenever the moon is full.

Despite being an important player within the development of “Howling IV: The Original Nightmare” and “Howling V: The Rebirth“, producer/writer/actor Clive Turner was either fired or left the franchise before “Howling VI: The Freaks” entered production, even though Mary Lou (Elizabeth Show)- from the previous film- has a brief cameo to suggest some sort of connection. Most of the Howling sequels tend to ignore all of their predecessors, even the one responsible for any of these existing, so this stood out as particularly odd…and that is the only interesting thing I have to say about “Howling 6“! This is not to suggest that the film is dull, as it’s actually an OK movie, probably being the steadiest of the sequels in its OK-ness from beginning to end. But even though the story surrounds a battle of wits between a werewolf and a vampire in a f@cking circus troupe and even though there are ear popping lines such as “Don’t move, or I’ll shoot your dick into the next county” and even though there is a love scene between a dwarf (with a grotesque arm growing out of his chest) and a deranged hermaphrodite, there’s just not a lot to write about. There is some good, along with some bad, but considering the bizarre premise and potential for strangeness, I thought this was a rather mediocre experience.

I guess have to give the writer credit for penning a decent, if a bit choppy, script. Yeah, my mind registered some annoying cliches, along with the occasional bout of plot induced stupidity and the characterization of Harker was a bit vague and confusing. He struggled recalling who the lead was even after learning that Ian was one of his victims, so how many people has he cursed? Does he turn people into werewolves very often? Maybe in continuity, he is responsible for them existing in the first place, but it’s never really explained. I also didn’t quite understand why he was abducting deformed people to perform in the freak show, as he seems to treat his troupe as a tool for covering up his murders. He already has willing accomplices, so orchestrating criminal activities which could potentially draw unnecessary attention to his even more serious criminal activities seems a bit risky. Maybe he just has a real passion for his freak show, as he does seem to revel in it, but this angle is also underdeveloped. Moving on- The ending was very unsatisfying, leaving too much unresolved and lacking any sense of closure, although apparently the original intention was to set up the story for the sequel (which was discarded in favor of “Howling VII: New Moon Rising“). But none of these flaws had any real impact on my viewing experience, so I’m merely going through the motions of listing them. There weren’t any random information dumps and I never had a problem with the way the plot unfolded. I thought Ian (Brendan Hughes) was a somewhat lame protagonist, as he’s set up to be intelligent, motivated and potentially dangerous, but his plans for vengeance are foiled due to an embarrassing blunder on his part (he…falls asleep?). It was difficult to take him seriously after that, although I did still feel bad for him. His love interest (Michele Matheson) is bland and their relationship is very shallow, but at least their romance didn’t devour too much screen-time. Nevertheless, the filmmakers beg us to care, while I personally was more invested in the supporting characters. I liked how the Sheriff (Gary Carlos Cervantes), Dewey (Jered Barclay) and Winston (Sean Sullivan) all developed throughout the course of the film, when they could’ve easily been boring caricatures instead. Winston- the Lizard Boy, ended up being the most sympathetic character and his subplot was genuinely moving, almost to the point of tears. My biggest problem with the script is that for the first 40 minutes, the narrative kind of wanders around aimlessly. Ignoring the opening kill, you can easily forget that this is a horror movie, much less one about a werewolf. I wasn’t entirely sure what the plot was, what the characters motivations were and I was getting a little bored. 10 minutes should’ve been trimmed down from the first act, but once it FINALLY gets going, the story moves at a pretty brisk pace. The dialogue was fine, with some amusing exchanges, such as the aforementioned “Don’t move, or I’ll shoot your dick into the next county“/”Then I certainly won’t move“. If there were any lines that could be described as hokey, pretentious or lazy, I can’t remember any. Either they don’t exist or they simply did not distract me enough to take note of them, so that’s a minor victory for the script. 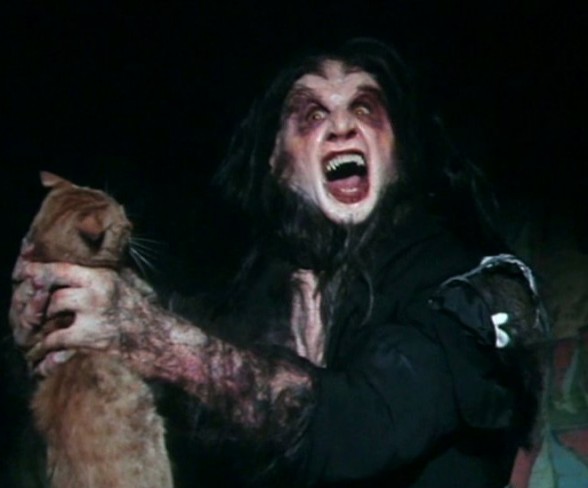 I think that with this exact same script, “Howling 6” could’ve been a good, if not really cool flick. Unfortunately, Hope Perello’s direction is strangely uninspired for the most part, ignoring some misguided attempts at being artsy- the overexposed lighting during that imagination tryst was weak. He does a competent job, but can’t seem to decide what visual style he’s aiming for and doesn’t go far enough with either of them. The first 30 minutes resemble a modern day western, with fitting musical cues, old fashioned dialects, dusty aesthetics and the cinematographer uses familiar western motifs- even starting off with that hazy mirage shot where the drifter walks towards the camera from a distance. But it would probably be better described as a ‘western-light’, as there is nothing eye popping about the imagery. It doesn’t really matter though because the western angle is eventually discarded in favor of Sideshow macabre, which is significantly more interesting…but not quite interesting enough. The special effects guys do an exceptional job bringing these deformities to life and I liked the use of fog, the zany set designs and the bizarre appearances of the characters, but…the direction still feels kind of flat. Maybe the cinematographer is the one to blame, as it seemed like the camera would distance itself from the more disturbing content, undermining the impact of the visual. I wanted more of that colorful circus atmosphere, which would’ve required a lot more claustrophobic close-ups, flashier lighting and maybe some experimentation. What we get is acceptable, I guess, but not striking enough to stand out. There was one very suspenseful moment where the Sheriff is talking to a caged Ian and it’s effective because it suddenly dawns on the Sheriff that he’s isolated in a hostile environment and I felt that paranoia. I felt that fear! But then he leaves the tent and that atmosphere immediately dissipates, as daylight seems to kill the tension, the lack of extras lessens the threat and the tone becomes a little comical. It was a wasted opportunity, as my balls had been temporarily gripped!  During the chase sequences, Perello relies too much on slow motion and the ‘killer cam’ and I personally think watching someone run from a camera for a prolonged period of time is more goofy than terrifying. STOP LOOKING BACK! STOP FALLING DOWN! Nevertheless, I liked the fluidity of the camerawork, as it made the overall presentation seem more sophisticated than it really was. There is even one genuinely frightening scene where a character makes the mistake of entering Harkers’ trailer during a very bad time. The jump scare is earned with the right amount of buildup, startling even me! The director seems to struggle with his cast, whose performances are wildly diverse. Some lines are delivered dreadfully, while others are delivered with conviction. Bruce Payne is awesome as Harker, using his charisma to command every scene that he is in. Brendan Hughes, on the hand, showcases no charisma as Ian- even though he technically did fine. At least he can act, which is more than I can say for Michele Matheson (Elizabeth), who seems lost throughout the entire film. At times, her ‘cutesy’ style of acting derails the tension, as it’s very distracting. I’m guessing they were trying to emphasize her innocence, but she ended up resembling an ‘adult pretending to be a kid’, which made her romantic moments with Ian rather creepy. But otherwise, I thought the acting by the principal cast was more good than bad, even if “Howling 6” could’ve benefited from more retakes.

At least we get plenty of shots of the werewolf this time…*Ahem* “Howling 5” *Ahem*…The transformations are actually decent and I thought the first one masked the budget limitations cleverly, while looking kind of cool. Unfortunately, the beast itself is kind of lame, as the werewolf design is much more akin to “The Wolf-Man” than “The Howling” and correct me if I’m wrong, but doesn’t “Howling 6” belong to the Howling franchise? Even if I could forgive this, the makeup has too many odd quirks that I could not take seriously, such as the red lipstick and eye shadow. I will concede that this is not the worst special effect to appear within a Howling movie, as it’s a little more convincing than the equivalent from “Howling 3” and at least a certain amount of detail went into the werewolfs’ appearance, putting the quality of the prosthetics above “Howling 2“…And…Um…it’s on-screen, so I suppose that automatically makes the SFX in “Howling 6” superior to the off-screen effects of “Howling 5“…But I disagree with the old fashioned look of this wolf, to the point where I’d even prefer those rubbery beasts from “Howling 3“, as at least they had a passing resemblance to the Howling archetype. I think these changes were incorporated to make the werewolf look more pitiful, but we are supposed to fear it throughout the majority of the film, so I don’t think that idea worked. The vampire design is a lot more menacing and memorable, drawing inspiration from “Nosferatu“, while having its own distinct appearance. The downside to its success is that the vampire accidentally upstages the werewolf in a WEREWOLF FRANCHISE, making me want to root for the wrong creature. The final confrontation between them makes little sense, as the werewolf can’t even break its chains while the vampire can throw around cars, but I guess it was satisfying enough. I can’t imagine the choreography being any better. Moving on- The production values are solid and the overall quality of the movie is fine, but maybe the problem is that the director is taking the material too seriously, while having just enough to skill to make a movie that we can take seriously too…and…I don’t think the sincerity worked this time around. “Howling 6” needed to be a lot campier, considering the content. It needed to be wild and zany, not reserved and safe. After all, this is a movie about a werewolf being forced into a circus freakshow headed by a vampire played by the guy with blue lipstick from “Dungeons and Dragons“! This should be the ultimate lark! So while this is an OK movie, it’s a pretty forgettable entry amongst the Howling sequels…which is especially odd considering that it’s also their superior.

Violence: Rated R- there are some nasty moments.

Nudity: There is some, but the context is more bizarre than sexy.

Overall: “Howling VI: The Freaks” is technically the best of the Howling sequels, but it achieves this by being OK in every aspect of film-making, making it a little too average for my tastes.