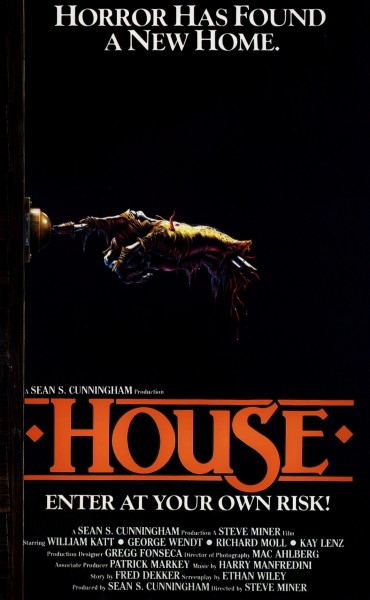 Plot: Roger Cobb (William Katt) is a popular-yet-troubled horror novelist who wants to write about his experiences in the Vietnam War, secluding himself in a mysterious house. But at the stroke of midnight, horrific creatures terrorize him, seemingly drawing inspiration from his life tragedies and his novels.

I like to imagine that there is a reunion happening within my memory, where “House” is warmly greeted by “The Gate“, “Puppet Master” and many of my childhood favorites. They would wine and dine like Kings, reminiscing about the times they used to be able to scare the crap out of me. But the party ends on a sobber note, as they realize that they can no longer instill fear in me as much as they evoke nostalgia. They question whether or not they were even that effective to begin with, or if I was just a giant pussy during my early years. But as they’re going home, a contagious smile grips them all…and then they beat “Puppet Master” to death with a chainsaw, acid and a chainsaw made of acid…because I still have not forgiven that f@cking franchise for being so f@cking unwatchable. They then have a massive blood orgy over its rotting corpse as I laugh maniacally.

“House” terrified me as a kid and…entertained me as an adult. This horror-comedy is pretty good, even occasionally morphing into something incredibly awesome. But throughout my viewing experience, I kept thinking how it could’ve been better. In fact, I’d even argue that the potential to be a great upstaged the actual movie, as the missed opportunities often distracted me from even its better qualities. The premise is actually rather powerful, even though it could’ve easily just coasted on the traditional Haunted House formula. But consider all of the ingredients for greatness- The protagonist is a horror novelist who is beginning to resent his niche. He’s writing about his horrific experiences from Vietnam. His young son has vanished without a trace and his wife is divorcing him. Plus, his crazy Aunt has just committed suicide, leaving him her spooky house. I liked how the ‘terrors’ inflicted onto our poor protagonist tended to surround his personal demons. One ghoul actually takes the form of his wife…Or if he just imagining that his wife is a ghoul? At one point, a child staying at his place is abducted by other creatures of the night, mirroring the situation with his own son. The entire finale is based around the Vietnam angle and even his neighbor (George Wendt) makes a comment about how all of this resembles one of Cobb’s books. Is his past trauma bubbling to the surface, driving him insane? Or is the house really haunted? Are the spectres manifestations of his ‘Post Traumatic Stress Disorder’? Or is his PTSD just a red herring? These questions and possibilities give “House” more substance than the usual horror spectacle, without even sacrificing the crazy, grotesque mayhem that casual fans would desire out of it. 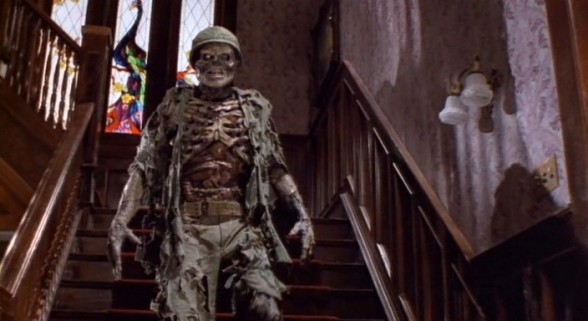 This was produced back when Steve Miner could be proud of his contributions to the genre, as “House” is directed with a firm hand. There are some very suspenseful moments, some atmospheric shots and touches of style. Yeah, the Vietnam flashbacks aren’t very convincing, but at least it was an ambitious idea! The cinematography is gorgeous and the camera glides through the house smoothly without disrupting the flow of the scene. “House” boasts a technical finesse that is rarely seen in horror films, especially during the 80’s boom, which usually preferred a grittier and grainier style of film-making (probably due to the inferior equipment). The visuals are so polished that they might alienate some fans, who would consider the grit and grain part of the genres appeal. While I do believe that the ‘roughness’ of 80’s horror helped define it, I can appreciate both styles, so I was able to embrace the aesthetics of “House“. The music is catchy and fits snugly between both of the wildly different tones (more on that later). The acting is startlingly good for a genre flick, with everyone being able to showcase a variety of emotions, while also nailing the comedic timing. I loved the interactions between Cobb and Harold, as the actors had wonderful chemistry and the dialogue was surprisingly snappy (albeit not necessarily clever). Finally, “House” boasts some really cool monsters! The designs are creative and sinister, but there is also a nice sense of fun about them, so they’re not too creepy. The Puppetry and makeup required to bring them to life remind me why I prefer practical effects over CGI. The grotesqueness stands out a lot more and it’s easier to accept the illusion that these creatures are actually there. Sometimes these abominations even managed to startle me!

The problem is that the script lacks focus. Actually, that is an understatement, because what the script really lacks is…sanity? “House” is a horror-comedy, but its crazy sense of humor doesn’t really show itself until around the 30 minute mark, causing some serious mood whiplash. Perhaps the acting is too good, as the scenes of Cobb grieving for his son, pining over his ex or going through PTSD whenever writing about what he did in Vietnam are suitably depressing and sometimes even disturbing. It’s jarring when the supernatural manifestations of his grief end up being comical. The humor eventually began to undermine the drama, while the sadness of the various situations ended up throwing a wet blanket onto the humor. I’m not sure what the writing process was like, but I often wondered if there were some creative differences behind-the-scenes, or the writer simply could not make up his mind half of the time. Even if you ignore the Dissociative Identity Disorder tone, Cobb doesn’t show any signs of PTSD for the first act of the movie, so his descent into insanity felt way too abrupt. Cobb seemed so well adjusted that I even struggled with buying him as a War Veteran, much less a traumatized survivor with serious guilt issues. There needed to be more foreshadowing to his madness and more evidence of his psychological problems BEFORE his questionable sanity becomes a major plot point. There is a lot of filler in the narrative as well. I found myself wondering why the neighbor demanded so much screen-time (as much as I liked him), because he doesn’t play a significant role within the plot. Why did there need to be an alternate love interest, who has a child of her own? That subplot would make more sense if the theme was about moving on, but “House” throws that out the window with its ending. Because of all of these irrelevant pieces, the relevant parts of the puzzle don’t get enough time or space to complete the narrative, making “House” seem oddly disjointed.

In the end, I think “House” was just a superficial horror-comedy that accidentally stumbled upon some intriguing ideas during the writing process. More than likely, someone had a cool vision of an Undead Soldier, so added the Vietnam subplot to justify its presence. If they ever realized the potential, they dismissed it because they were set on creating a horror-comedy, which wouldn’t be able to properly explore the impact of PTSD. The neighbor and alternate love interest? They’re only there to provide some intense moments and laughs, which makes them relevant in the filmmakers eyes, as that is the goal of the film. Did I find “House” funny? I guess, but I think other horror-comedies like “Tremors“, “Evil Dead 2” “Gremlins” and the more recent “Krampus” are a lot funnier. Did I find it scary? Not really, even though there are some gripping moments. It provided enough jolts and giggles, while being so swiftly paced that I never got bored. I like “House” a lot more in parts than as a whole, although I absolutely adore the cool parts. Yet I kept projecting my own vision of the movie onto the TV screen and couldn’t stop myself from comparing the two. Maybe I’m the problem and the film is actually fine, but the first words that enter my mind whenever I think of “House” are…’missed opportunities’…followed by: ‘”Puppet Master: The Legacy” f@cking sucks’. Considering that EVERY movie seems to bring that thought to the forefront of my mind, I must suffer from PPMST (Post Puppet Master Stress Disorder). Hopefully, I don’t find myself inheriting any haunted houses which would force me to relive those experiences.

Violence: There is violence, but the movie isn’t gory. The monsters are very grotesque though.

Nudity: None, although there is a little bit of sexuality.

Overall: “House” is good enough, but I can’t help but think how it could’ve- no, should’ve- been great. I like the other “House” a lot more. There were three sequels, but I haven’t seen of them…yet…