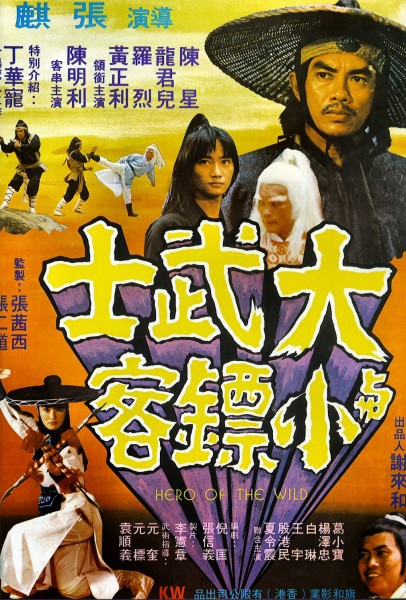 Plot: Tu Tashan (Sing Chen) kills the Father of Sa Woo (Hua Chung Ting), but decides to take the son on as his student. His only requirement is that Hsiao Hu trains hard and never forgets about his quest for vengeance, which becomes complicated once they begin to develop their own Father-Son dynamic. They travel together to hunt-and-kill the traitorous Nan Pa Tien (Jang Lee Hwang), while Sa Woo continues to try and slay his Fathers’ murderer. Also known as “Heroes of Shaolin” and “Da wu shi yu xiao piao ke“.

I wasn’t sure what to call “Heroes of the Wild” for this review, because it’s often known as “Heroes of Shaolin“. Netflix refers to it by the former and hulu lists it as the latter, but I made my decision based on the lack of…Shaolin…in the story. Instead of monks, there are ruthless killers and instead of temples, there are brothels! This was an exceptional kung fu flick held back by an awful DVD transfer. The cropping is so crude that they couldn’t even fit the credits on the screen! I’m not sure whether to blame the transfer or the editing for the next point, but a scene will end and an awkward black screen will consume your television for a few seconds, before the grainy picture resumes. I felt like I was watching an old, beaten up VHS tape based on the quality and the English Dub was sometimes hard to decipher. I’m perfectly content with laughable voice-work, but I do want to understand what they are saying. I have yet to see a more pristine release, but hopefully it eventually gets one, for “Heroes of the Wild” was a special experience for me. This happens to be one of the only kung fu flicks that offers all of the punching, kicking and sword fighting a fan can ask for, while also boasting strong character writing.

Tu Ta Shan (Sing Chen) has to be one of the most complex characters to have ever graced the kung fu screen. He looks like a villain and his dimeanor supports that first impression, although he introduces himself by returning a lost kite to a young Sa Woo. He also displays extreme arrogance, beating a Father badly in front of his son and callously imploring him to commit suicide. He seems bemused when Sa Woo clumsily attacks him in his grief, but ultimately adopts him as his student, while making sure that the boy never forgets to avenge his Father. Tu Ta Shan also kills the boys pet dog, so…He’s kind of an asshole. And he’s a mercenary who is willing to kill for money…although the dog thing is far worse… But it becomes apparent that he has grown to care for Sa Woo and the thought of him dying seems to cause Tu Ta Shan much distress. I loved finding out more about this guy, who despite his gruff appearance, seems to be a romantic. Sing Chen perfectly balances these contrasts and his awkwardness when interacting with women is so adorable. It even made the admittedly superfluous romance bearable, as it showed a different side to his personality. I also loved his warm facial expressions that the camera would zoom in on…as he threatens to beat his surrogate son to death…Sa Woo (Hua Chung Ting) goes through the same arc, although his characterization is much more standard. He’s a bit of a brat whose attempts at outsmarting anyone tend to fail miserably, concealing the fact that he is a genuine prodigy. He resents Ta Ta Shan, but does eventually realize he cares for him too. The villains might seem standard at first glance, but once again, their purpose is to flesh out our protagonist- who really is Ta Ta Shan- and reveal his vulnerabilities. Plus, it turns out that there is more to them than what we see on the surface too.

We’ve seen the story of ‘Boy must train to fight in order to avenge his Father‘ many times before, but by making his teacher into his Fathers killer is a unique twist, especially as the killer is the protagonist. That is creative writing, although the narrative occasionally stumbles. Nevertheless, I like how this story is balanced with the other plot involving Manchu Agents and Assassinations. Both plots help hold each-other up, without one taking too much time from the other. More importantly, these are the kinds of stories which justify LOTS AND LOTS OF FIGHTING! YAY! The narrative utilizes mirror character arcs, where the protagonists are placed in identical situations and go through the same emotions. Tu Tashan berates and roughs up an injured Sa Woo, before realizing how hurt he is and immediately going into doting nurse mode. Later on, he is the one who is hurt and the process repeats with Sa Woo being the caretaker. I was concerned that this would slow things down too much, but the acting carries these scenes and I had to applaud the writers for their storytelling boldness. Unfortunately, I do think that they contributed to burning out the narrative during the third act. I eventually did start to feel a little exhausted by the finale and was somewhat impatiently waiting for it to end.

Am I forgetting anything? Oh yeah, kung fu happens in kung fu movies…The choreography was done by genre icons Cory Yuen and Yuen Biao- both who also play small roles- and you can definitely see the lightning fast style that they would later master. The fight scenes aren’t as polished as the shining examples of their time period, as there are plenty of sloppy moments, strange sound effects and some obvious undercranking, but they still dazzle and entertain. There is a good combination of speed, technique and acrobatics, with the violence giving them a much needed oompth. There are hand-to-hand duels, one-against-many brawls and weapons occasionally change the dynamics in order to keep things from becoming stale. I liked the psychology of the fights, as tactics are used and the emphasis on their facial expressions during these battles tell you a lot about the direction it is going to head. There is A LOT of action and just because I spent the majority of this review discussing the story and characters, do not think that this is a drama of “Grandmaster” proportions. It is a pure kung fu feature that merely happened to have a stronger storyline and cast of characters than most of its ilk. While the transfer sometimes upstaged the direction and cinematography, there are some striking visuals and the scenery is consistently gorgeous. I also really liked the score, which had a western motif and the costumes looked really cool too. The director would go on to helm “Death Duel of Kung Fu” and in my review of that, I say: “But based on his work as director of “Death Duel of Kung Fu“, he’s a hack. Sorry, maybe his talents lie within his his other film-based careers, but he is not a good director.“. Sometimes I can be a fool and “Heroes of the Wild” punished my insolence with a swift kick of awesomeness to the side of my head. Maybe he was lucky for this or unlucky for that, but I shouldn’t have judged his abilities based on a single flick. “Heroes of the Wild” isn’t quite as entertaining as “Death Duel of Kung Fu“, which I believe had a smoother pace and better choreography, but this is a more rewarding experience and it’s the all around superior movie.

Nudity: None, although sexuality is brought up.

Overall: “Heroes of the Wild” is actually a pretty good movie, while also being a good romp for kung fu fans. If only it had a better transfer…