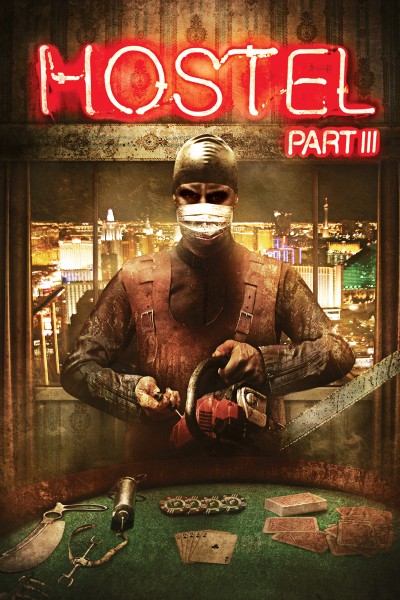 Plot: A group of friends hold a bachelor party in Las Vegas, but they stumble upon a deadly club where wealthy sickos watch poor unsuspecting tourists get tortured to death. Now our heroes are their latest targets.

“Hostel: Part II” had a very lukewarm reception compared to its predecessor, infuriating critics, earning a shrug from horror fans and underperforming at the box office. It wasn’t a bomb by any stretch of the imagination, making some money while generally being regarded as okay by those who care, but the problem was that “Hostel” helped build a bandwagon for all the little horror of the time movies to jump on. When a sequel to a major success doesn’t reach anyones expectations, it’s a sign that the bandwagon is beginning to fall apart. So the potential franchise crashed into the realm of direct-to-DVD cinema, which is rarely a good thing. While there are exceptions, direct-to-DVD flicks usually have smaller budgets, shorter production schedules, less ambitious filmmakers and less talented actors. Even worse, “Hostel 2” showed how there wasn’t a whole lot which could be done with this concept that we hadn’t already seen before. What’s more unpleasant than enduring the same shit? The same shit, but suckier. Either “Hostel 3” would have to deviate from the formula too much, which would infuriate established fans, or it would have to be slave to the formula, in which those same fans would accuse the film of being lazy…There really was no way that a “Hostel: Part III” would turn out to be good, but it was pretty much guaranteed to make a profit. I suppose I will concede that “Hostel: Part III” wasn’t as terrible as I feared it would be, but the movie offered nothing that made it worth watching.

Michael D. Weiss is a screen-writer who is practically a resident of direct-to-DVD cinema, penning plenty of low budget originals and sequels. I was pleasantly surprised that he actually had a few good ideas for his “Hostel 3” script, often using our expectations based on the previous films against us. He somehow DID find a way to shake up the formula and deliver something that is…well, I don’t want to say ‘new’, but he isn’t just recycling the conventions of its predecessors.. Yet at the same time, the scenario is still what we’d expect out of a “Hostel” flick. There are many reasons you’ll probably dislike “Hostel 3“, but they’re likely not going to be the same reasons you disliked “Hostel 2“.

I thought the dialogue was pretty funny during the first act, where almost every viewer unanimously began to wonder if they accidentally put in a rip-off of “The Hangover“. Unfortunately, once the ‘horror’ begins, the filmmakers start experimenting with black comedy and…well…let me give you an example of some of the humor. A guy looks at the corpse of a girl and says: “You’re dead sexy“. Hahahahahaha, GET IT?! That line alone was far worse than anything Eli Roth has ever written…God, I never thought I’d feel the need to say that…The characters are mostly just flat, in total contrast to the more interesting- yet annoying- casts of the previous films. Like Eli Roth or not, he did at least try to flesh out and develop his characters. “Hostel 3” plays into the stereotypes and while there are some decent twists, the characters are mostly boring with a dash of unlikeable. They are either bitchy, whiney, hostile or agonizingly clichéd. When our protagonist, the fiancé who is about to get married, starts smexing a girl only for him to back off and request that they just “talk”, I gagged. How many times have I seen that scenario before? The only marginally interesting character is a bad-ass whom the villains almost seem to fear, but he is underused…and noisy. I might’ve wanted to punch everyone in “Hostel“, but by the end of that movie, I was rooting for the lone survivor to come out on top because he had some depth to him. His attempt to save the girl was inspiring! I couldn’t care less what happened to any of these people. In regards to the rest of the writing, there are some really dumb moments. I never could buy a place like this existing in Vegas, but I might’ve accepted it if their security wasn’t so laughable. This might be one of the few horror movies where the bad guys are foiled because…someone actually had a cell phone. That’s so stupid that it almost goes full circle and becomes clever. If they had done that correctly, it might’ve been a refreshing twist, but it only works because the villains are so incompetent. The ending was pretty ridiculous too, but generally the script was…passable. I respected Weiss’s attempts to outsmart the audience and his failures are tragically common within the horror genre…especially the direct-to-DVD ones. Outside of the “you’re dead sexy” line, the badness never infuriated me.

But it’s the director who REALLY botched the movie. Even when the script was being clever, such as with the opening scene, Scott Spiegal just cannot generate any suspense. Either he’s rushing through the scene so quickly that there is no time to build tension, or he’s taking way too long in his attempts at building tension. I never agreed with how he would frame the camera because it undermined the gore- which should be this films redeeming quality- or it would end up being silly. There are some shots that obscure the violence so dramatically that I couldn’t really tell what was going on. The worst example is when a character is being shot with arrows. We don’t see them connecting and his reactions could easily mean that they’re missing, but then it’s revealed they HAVE been getting them and I was like “huh?“. I should be unsettled, not confused. I think Speigal was going for a psychological edge, much like what Eli Roth did before him, but it fell flat. When Roth would have a girl about to get her toe cut off, but then cut away just as the deed happened, I flinched. When characters would die in “Hostel 3“, I’d usually yawn. Spiegal also made a mistake by relying too much on CGI. The face peeling was fine simply because it was a practical effect, but everything else is usually either tame or computer generated. I don’t like CGI gore, but I like bad CGI gore even less. It doesn’t really matter though, as the amount of violence pales compared to its predecessors. There isn’t any sense of atmosphere because the locations are bland, which is a shame because the previous films really benefited from the dilapidated sets and exotic locale. With that said, “Hostel 3” doesn’t look bad for a direct-to-DVD flick, thanks to having a reasonably sized budget.

I think I’ve criticized all of Eli Roth’s films for having unstable tones, but “Hostel 3” made want to take those words back. Yes, Roth had the tendency to unnecessary try to balance comedy and horror, but at least I always knew when I was supposed to laugh or be scared…even when I wasn’t laughing or being scared. I could never figure out whether or not I was supposed to take “Hostel 3” seriously. At times, a scene that will be portrayed as disturbing and tragic will immediately be followed by something goofy. Other times, the…questionable…acting failed to sell any sense of terror. When a character starts panicking and crying, not unlike the characters of the previous movies, they’re mannerisms become so over-the-top that these allegedly disturbing moments end up being silly. The kills themselves tend to be cartoonish, like having a chick die from CGI cockroaches who for some reason all crawl down her throat…why doesn’t she just close her mouth? I don’t know, but I can tell you that the scene was closer to being funny than it was being scary. Yet I also never laughed, so…Is “Hostel 3” a comedy or a horror? I think it’s trying to be both but either way, it failed. The director couldn’t establish the proper tone, nor did he ever succeed in getting under my skin…except when it came to annoying me. I also suspect that he is behind the weak performances- I’ve seen these people do better. I didn’t think the acting was terrible, but the actors struggle when they’re required to do some heavy emoting. The director should’ve reigned them in and in a few cases, told them to emote more. The gore was a major letdown considering how that is supposed to be the backbone for this franchise. There isn’t a lot of it and what we get is ruined by the reliance on CGI. At least no one will call this torture porn… I will give the writer credit for trying. He had plenty of inspired ideas and he somehow wrote around the staleness of the formula- something I thought was impossible. For his efforts, I do want to give a passable rating to this movie, even if the script itself is too flawed to be considered good. I just…can’t! “Hostel: Part III” doesn’t excel enough to be worth it, even if it’s not unwatchable. If they had a better director, even with the same script, this might’ve worked…

Violence: Rated R worthy, but it’s nowhere near as gory as it should’ve been.

Overall: “Hostel: Part III” is a below average horror-thriller thanks to the weak direction. It’s not good or bad enough to stand out.