(Written and Directed by Eli Roth) 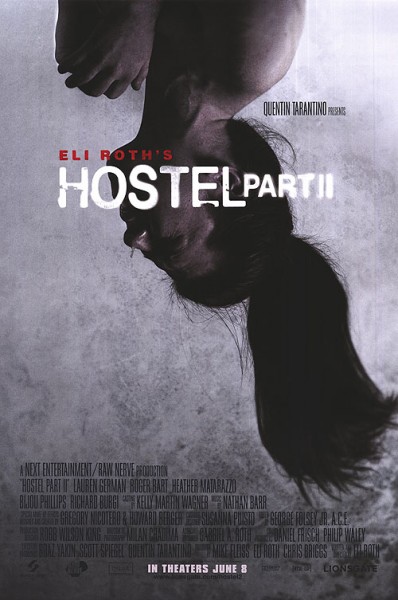 Plot: Sadistic rich people travel to a Slovakian hostel, where they are free to torture and murder unsuspecting tourists. Three American college girls are the latest targets.

“Hostel 2” is an enigma that is filled with so many contradictions that it’s almost impossible to review it without coming across as a deranged hypocrite. The critics were quick to damn this movie, deriding it as gratuitous torture porn, even though they praised its predecessor- which was also gratuitous torture porn…Okay…So maybe they’re really condemning the flick for having an identical formula, losing all of the surprise and uniqueness which elevated “Hostel” above its torture porn limitations, while delivering nothing BUT the gorn. That makes more sense, yet “Hostel 2” does contain more originality than I had remembered. It has different kinds of characters (and I’m not referring to their genders), a re-arranged structure, focuses more on the people behind the Hostel, has a visual style that is the antithesis to its predecessor and even delivers a few surprises which catch us off guard BECAUSE of our expectations. “Hostel 2” is definitely not a complete rehash, but what makes my claim strange is even though I say that and have valid points to support my argument, the differences don’t stay with me like the similarities do. “Hostel” was a very imperfect movie and I do feel that the critics were way too generous, but it did offer more than just gore and sleaze. The premise, characters, creepy locations, menacing costumes and unsettling atmosphere stood out- even its flaws buried themselves in our minds. Even though “Hostel 2” contains more originality than people give it credit for, the new ideas are all undercooked and don’t leave an impression. We forget about everything it did differently, so we just focus on the similarities (and there are many). “Hostel 2” feels like Eli Roth was only interested in the project for the money, as it lacks the hyperactive enthusiasm which accompanies even his worst films. So he played it safe, creating a harmless torture porn flick…and yes, I know how odd that sounds…But it has an effortless pace, a consistent tone and characters who aren’t as likely to piss you off. It might not be as memorable as its predecessor, but it’s also less likely to get on your nerves.

The film opens with the death of our previous hero Paxton, which pissed me off. It’s a mean-spirited kick in the nuts to anyone who was invested in his character arc to just axe him off in the opening scene. It’s even WORSE how they handle his murder, as it’s off-screen and results in a darkly comedic sight gag. BOO! THAT SUCKED! It didn’t even add to the story at all! How is it horror fans like Eli Roth or Rob Zombie are totally oblivious to how this ANGERS REAL HORROR FANS! But moving on…our new cast of characters aren’t as annoying as leads from “Hostel“, as these girls aren’t so noisy and there isn’t as much time dedicated to them. However, they’re standard slasher fodder and that’s the extent of their characterizations. At least the previous film gave us some interesting tidbits about these characters that made them more than just their stereotypes and it did an excellent job of masking who the real protagonist was. Here, the heroine (Beth) is clearly the main character and nothing about her or her friends is especially compelling. I was going to praise Beth’s implied lesbianism, but then I remembered that one of the guys in the first film was also an implied homosexual…whoops! I will give Roth credit for not being sleazy about it though. Don’t expect hot lesbian action because the best you’ll get is some sexual tension. The nudity in general is generally too disturbing to be sexy, which surprised and disappointing many audiences as you’d think there would be more sex when the heroes are now college girls…I respect Roth for his restraint in this regard. The more interesting characters were the clients, who ARE more than just their stereotypes and they have so much chemistry that I wished the film was purely about them. If that happened, no one would’ve condemned “Hostel 2” for being a rehash, because no one would’ve been a fresh new angle. Roth had a good idea to give us a different POV, but he needed to take that farther. Perhaps that was his original plan, but the studio executives demanded more of the same ole shit. Who knows, but it was a wasted opportunity. The acting is pretty good, with Lauren German (Beth) selling her characters toughness and Roger Bart (Stuart) delivering the best performance because he’s playing the only real complex character. The majority of the cast does fine though. There are a handful of cameos, some bizarre (Louis C.K?), but Ruggero Deodato’s (Director of “Cannibal Holocaust”) appearance has to be the best cameo of all time. He’s playing a cannibal, which was clever, but it fit nicely within the narrative. That was awesome.

As I said, the story does occasionally defy our expectations. We see more of the behind-the-scenes works of the Hostel, showing us that its influence extends as far as the United States. The implication is creepy, but it’s also never really utilized to its full potential. The third act is much different in that…there almost is no third act. In fact, the structure between the two films are vastly different. Both films share an identical running time, but “Hostel 2” feels a lot shorter. It has a much faster pace, even though I can’t say that the action starts any quicker. As I found the characters to be boring, how did this happen? Well, “Hostel 2“ has a conventional three act structure, WHICH IS FOR THE BETTER. “Hostel” had an unnaturally long (45-50 minutes?) first act and a criminally short (20-25 minutes?) second act…This really hurt the pacing, as it spent too much on building up the characters who weren’t always enjoyable to follow. Most films have a 20-30 minute long first act and the second act usually spans between 40-60 minutes. So with Part 1, most of the time was spent on the partying (act 1), some time was spent on them searching for the missing friend before being captured themselves (act 2) and the third act was a big chase scene. While there is a cat-and-mouse hunt in “Hostel 2“, it’s only part of the second act- which is about as long as it needs to be- and the third act is the torture segment. Once again, it’s different…and yet even though the events occur in a different order, so much is similar that we can’t help but draw comparisons. The characters are American tourists who get lured to this hostel because a villain-in-disguise made it out to be awesome…and it is for awhile…then they are creeped out by the occasional weirdo who is obviously in on the conspiracy, desperately try to search for their missing friend and are ultimately tricked by the person who brought them there in the first place. Then they beg for their lives as they get tortured, before making some sort of escape based on the villains incompetence. Also, some sort of saw will cause serious injury. Whereas the new ideas don’t get as much time dedicated to them, the film instead focuses on the same shit we’ve seen before…and that drowns out everything else.

But is it scary?

“Hostel” had a very seedy atmosphere, emphasizing the wild, lusty partying amidst the dilapidated locations. “Hostel 2” has a much more…as cheesy as this sounds…romantic feel to it. The music, which ranges from operatic to classical, tends to evoke feelings of serenity and love. Eli Roth’s imagery is often haunting, but it tends to be more poetic and surreal. Both films have different styles based on the perceptions of the characters. The boys wanted to get laid, so hung out in the trashiest places possible and Roth’s use of sound and visuals emphasized that. The girls want a little bit more culture, so using many of the same locations, he uses sound and visuals to create very different feelings. My problem is that this new atmosphere doesn’t mesh well with the horror. In “Hostel“, The grimy, seedy underbelly of Slovakia was prevalent during the party heavy, comedic sequences where the characters are having fun and it was just as strong when the torturing began. The tone might’ve shifted, but the atmosphere persisted. While I think the romantic atmosphere could’ve made an interesting contrast with the gruesome violence, it just dissipates once the horror occurs. It went from having a distinct style to feeling like a standard horror flick- or a watered down version of its predecessor. I think the problem is that “Hostel 2” focuses more on the gore itself than the suspense. Eli Roth has a talent for utilizing violence, knowing what to show and when to show it, but he also understands when to allow our imaginations to fill in the gaps. “Hostel 2” doesn’t completely fail in this regard, it just doesn’t excel either. He doesn’t spend enough time building up the psychological terror that got under my skin during the first film, making me feel what the characters were feeling. Instead, it’s just a few moments before we get a gore scene. As someone who can appreciate the fine arts of disemboweling and castrations, I don’t despise “Hostel 2” for doing this. I’m just kind of disappointed. As I said, “Hostel“ was more than just torture porn, whereas “Hostel 2” was just torture porn…Acceptable torture porn, but you have to be part of the target audience…Which I kind of am? Furthermore, while there are some silly or cheesy moments, the tone was less erratic than ANYTHING else Eli Roth has done. “Hostel: Part II” is actually *gasp* mostly serious! Above all this critiquing, I was reasonably entertained…which I suspect won’t be the case when I review “Hostel: Part III”….but that is another tale…

Violence: Rated R. It’s very graphic, as one would expect.

Nudity: Quite a bit, but most of it isn’t very pleasant.

Overall: “Hostel 2” isn’t a bad follow-up, it just lacks the inspiration of its predecessor. I enjoyed myself enough, but I’m already forgetting it.