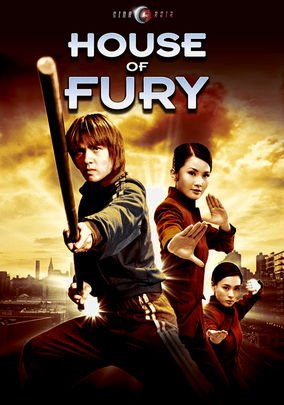 Plot: A Chinese chiropracter named Siu Bo (Anthony Wong) loves telling his children and their friends about how he used to fight assassins, agents and even ninja (!!), much to their embarassment. They dismiss his obviously exagerated (and inconsistent) stories until a mysterious stranger (Michael Wong) has Siu Bo captured. It turns out that his tales might’ve been true after all and now the villain is after his children. Luckily, Siu Bo has taught them martial arts and they’re prepared to kick butt!

I liked “House of Fury”. It’s not as good as it thinks it is, but there is just something so lighthearted and amicable about it. Is it corny? Definitely. Is it stupid? Sometimes. Is it original? Not really, think “Spy Kids”, but with kung fu (which automatically makes it better than “Sky Kids”). It’s heavy handed in its attempts at drama, but is sort of shallow. Yet there is a charm about the feature, a sweetness that is very heartwarming. It also provided some of the best on-screen fight scenes ever done by people who aren’t real martial artists. It’s not for everybody. In fact, its faults might be sickening to some, but I ultimately accepted its imperfections and enjoyed the experience.

Personally, the idea of a kung fu-comedy is more terrifying than thrilling. It seems like these kinds of movies can be summed up as either “wacky hijinks, which proceeds and follows a rape scene” (I’m looking at you, Sammo Hung!) or “loud chick shrieks at Jackie Chan”. Hong Kong has a very broad sense of humor that just doesn’t click with me, and sometimes “House of Fury” pushes those boundaries. Don’t get me wrong, it’s not a matter of tone. There is no rape and even the darker moments don’t seem out-of-place, nor are the gags particularly obnoxious. In a lot of ways, “House of Fury” can be interpreted as a kids movie (the dubbing adds profanity though). At the absolute least, it was made for younger teenagers. It’s silly, but I actually found the gags to be fairly clever. It also helps that they incorperate fighting into the jokes. One of my favorite scenes is when Natalie (Gillian Chung) and Nicky (Stephen Fung) are fighting under the dinner table. This leads to another reason why the comedy worked for me.

Everyone had interesting chemistry with each-other. Anthony Wong is easily the best actor, but he usually plays hardasses. I’ve seen him as the villain (“The Heroic Trio”), the gruff cop (“Infernal Affairs”), the noble gangster (“Exiled”) and I’ve even witnessed him rape a woman with chopsticks (“The Untold Story“), so I’m not used to him playing such a bumbling, goofball. He even converts (intentionally) bad jokes into laugh riots! The man plays off of every actor/actress- important or extra- masterfully and even manages to make his relationship with his dead wife (err) engaging. The scenes between him and Gillian Chung are cute because while she’s being a somewhat rebellious daughter, she obviously loves him and it shows on-screen. On the other hand, Stephen Fung was kind of annoying as he’s unnecessarily hostile towards his Dad. Luckily, Fung and Chung (lol) were believable as siblings and their amusing banter kept Nicky from becoming completely unsympathetic. That’s not to say the acting is good all around. Michael Wong (Rocco) is insanely robotic (was he even acting?), his caucasian son was terrible (although his martial arts abilities are AMAZING) and this was produced before Daniel Wu (Jason) became an acceptable actor. Nevertheless, the dynamics between the characters kept the weak links from becoming unwatchable.

This is also the most irksome flaw, however. Stephen Fung- as the director and co-writer- seems to want substance in his screen-play. Unfortunately, there are only hints of depth. Are we supposed to feel bad for Michael Wong’s character? He has a tragic back-story, but he’s also killing innocent bystanders who happen to have knowledge of the man he seeks. I felt his whole story was unresolved, therefore unrewarding. Does he get punished for his actions? Does he feel remorse? It’s unclear. The film tries to compare and contrast the relationships between the Father’s and their kids, but we never learn enough about Rocco or Nelson for that to work. I’m honestly unsure what the film was trying to say here. Did Rocco train Nelson to be his ultimate weapon? If so, why does Nelson have a PSP? Video games and physical fitness generally don’t go very well. Does he even love him? He has Nelson guard Siu Bo, which seems kind of reckless, but Rocco also sends him away when he’s about to discuss possibly killing someone. Nelson doesn’t really act like a sheltered kid either. He seems sort of normal outside of the actor’s inability to act and his freakish, asskicking abilities. I was under the impression that Rocco loves his son, but is so consumed by vengeance that his priorities are screwed up. You might be wondering why I’m so hung up over this. Well, those characters were really interesting. I liked the idea of similar-but-different family structures and wish they explored it more deeply. What we got just wasn’t enough and I was left unsure whether the Rocco/Nelson pair was intended to be sympathetic. Ultimately, I didn’t hate them or like them. I felt that there was the potential for something grand with the set-up, but the filmmakers sacrificed those characterizations to make room for Daniel Wu and Charlene Choi (Ella). Wu and Choi’s characters clearly weren’t concieved from inspiration, but instead appear to only be there for marketing purposes. Ella especially feels like a tacked on addition, as if someone wanted Choi to be part of the project so they could cash in on her collaborations with Gillian Chung, but had to make up a role because there weren’t any others available. Had these subplots been trimmed/removed, then that time would’ve spent on fleshing out Rocco and Nelson. This, in turn, would’ve made the familial theme much more poignant. Instead, it’s sort of half baked. Then again, this would require Michael Wong and Jake Strickland to do whatever they’re doing in place of ‘acting’, which might’ve backfired…Did I just spend all this time ranting, only to realize that what I wanted could’ve been worse? Ouch.

There are also moments of incredibly bad writing, such as….well, everything involving Daniel Wu. Wu plays Jason, Natalie’s new boyfriend. His skills are painfully convenient at first, as hacking into computers seems like an odd ability for a musician. This is actually explained, but the reason for this somehow makes his whole subplot even more contrived. It also adds a bad stain of melodrama, because we never understand why Jason and Natalie are in love. But the movie desperately wants us to give a damn about their relationship. While we’re on my complaints, a few scenes are way too un-subtle, such as when rain suddenly pours during a scene of character development. It’s supposed to be inspiring, but I found myself simultaniously gagging and laughing at it. Luckily, Fung also has moments of creativity, such as the opening transition from fantasy to reality. That was pretty clever.

But please remember, I do like this film. I’ve explained the strengths and weaknesses of everything except the most important aspect of a kung fu film: The kung fu. You can tell that the primary actors are not real martial artists due to the fact that they are constantly dropping their hands whenever they do something flashy. But do you know what’s more important than realism? Rhythem. Everyone moves fast and is incredibly athletic, allowing them to execute some shockingly advanced techniques. They do use some wires, but it enhances the combat, instead of driving it. The Wire-fu and occasional use of CGI blends seamlessly with the more grounded movements, so I didn’t find it to be distracting. Actually, what’s refreshing about “House of Fury” is that it does rely more on choreography than tricky editing or excessive wires/CGI. The kung fu industry began to prefer actors over martial artists during the 90’s, especially when Tsui Hark revolutionized the genre with his brand of special effects. Wire-fu was a gimmick to compensate for the actors lack of skills and when done right, it worked. But even the better examples couldn’t compare to what Jackie Chan, Jet Li or Sammo Hung had delivered in their prime. Apparently Stephen Fung agreed with me, because the martial choreography is more remniscent of their works, which is rare when non-practioners of kung fu are involved. The fighters are almost always together in the same shot, whereas most wire-fu relied on the actors attacking the camera. The blows often do look like they’re really hitting and the choreography is incredibly fast paced. It’s obviously rehearsed, but doesn’t LOOK rehearsed. They make excellent use of the setting and the actors are constantly striking or being thrown through glass. I can’t imagine how difficult the shoot must’ve been, as choreographing a good fight scene is difficult even if you are a trained martial artist. The action comes at us quite often too, so there’s very little downtime.

I believe even detractors will concede that the choreography is slick, even if it aims more for style than believability. But within the context of “House of Fury”, I don’t expect Bruce Lee’s more realistic approach to fight scenes. Believe it or not, that sentence was not intended to be ironic when I wrote it. You might be put off by the sloppy writing or the goofy comedy and I can’t blame you. I sometimes cringed, but personally, I found the humor to be rather appealing. I’d say “House of Fury” was funnier than “Police Story”. In fact, it’s one of the few kung fu-comedies that made me laugh. I just wish that it had reached its full potential and achieved greatness. But I just have to shrug and acknowledge that against all expectations, I got a good kung fu feature, despite the lack of real martial artists in the lead roles. That’s impressive to me! I also was able to enjoy it as a comedy, even though it was made in Hong Kong. I guess I can’t really complain.

Nudity: None, although there is some blatant sexual tension between Nicky and his love interest.

Overall: “House of Fury” is worth watching, but please keep in mind that it’s not for everyone.