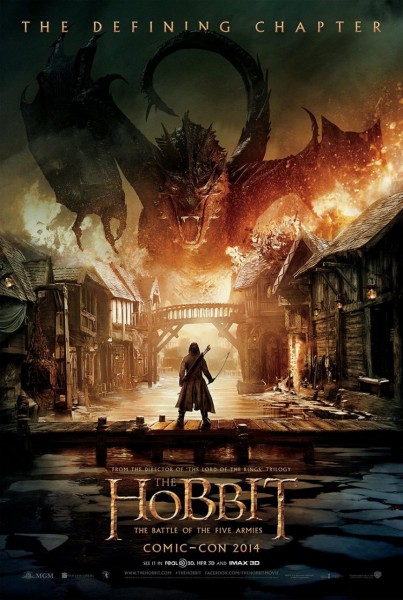 Plot: Thorin (Richard Armitage) reclaims his Kingdom of treasure when the Bard (Luke Evans) slays the dreaded Smaug, but greed consumes him and he alienates the humans and elves who also have claims to it. But when a large army of orcs descends upon them, the races must unite.

It has been universally agreed that “The Hobbit” trilogy is inferior to Peter Jacksons classic “Lord of the Rings” flicks, although audiences are divided as to the actual quality of these new films. For those unfortunate souls whom shall experience the damnation of reading my reviews for the first time, I consider myself a pretty big mark for these prequels. While their misguided attempts at recapturing the epicness of “The Lord of the Rings” backfired on a critical level, as “The Hobbit” should’ve probably been two lean films instead of three bloated ones, I do believe Jackson recaptured at least some of the greatness that elevated his career in the first movie. “The Hobbit: Battle of the Five Armies” feels less like a movie and more like the third act of a movie, being almost entirely based around a single awesome battle. You might find it to be shallow…because it is…but it’s certainly not ‘slow’. I personally enjoyed it a lot, but the film lacks the heart of its predecessors.

In a lot of ways, “The Hobbit” trilogy does very much feel like it is an 8 hour long movie instead of three. “An Unexpected Journey” is the first act, existing purely to introduce the characters and having events occur that would start their development. The focus on building up to the sequels is probably the reason why it bored so many viewers- although I adored it for its atmosphere. “The Desolation of Smaug” had a stronger balance of action, character and story, emphasizing the various obstacles the group counters as they develop- which is the purpose of a second act. “The Battle of the Five Armies” is merely the resolution- the third act. Smaug is defeated within the opening 10 minutes and the rest of the flick involves the orcs attacking the mountain, forcing an unsteady alliance between the races. There isn’t much of a story to be found, but it seemed like there was a lot of exposition and if you didn’t follow its predecessors closely, you will be confused. Outside of Thorins descent into madness, the characters primarily exist to be props who are only there to drive the action sequences. Bilbo’s development was more or less complete in the last movie, so he doesn’t get much to do, but some time is dedicated to minor characters (I like what they did with the High Elf). If you want anything deep or substantial, then you shall be disappointed because that was trampled by an army of orcs. The quirky humor, the charming sentimentality, the grim foreboding and the wonderment of middle earth are also casualties of the battle- which is a shame, because those are the elements that I adore about the franchise. So what do we get in its place? 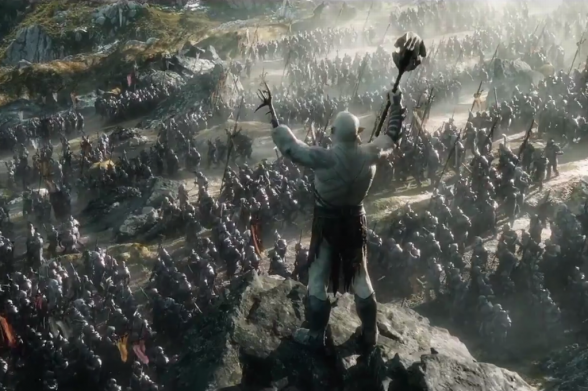 Action. Lots of action. Lots of AWESOME action. What can I honestly say? I believe that maybe it would’ve been better if Smaug perished during “The Desolation of Smaug”, as his death makes him seem largely unimportant despite being the most compelling villain. Nevertheless, his brief reign of terror was exciting. The battle scenes are wonderfully choreographed and the special effects were usually flawless- although there were some unconvincing moments. Peter Jackson fits in some brilliant imagery that gives a certain amount of depth to the spectacle. The shot of the orc floating through the ice was haunting, while the bit where Thorin loses his mind in the golden hall was mesmerizing. While the fanservice bits were unnecessary, such as Sarumon, Galadriel and Elrond busting Gandolf out of prison, who didn’t squee when Sauromon started kicking that ass? The stakes were high enough that this battle felt important to the franchise, so the action was intense as well. By the time the ending rolled around, I was surprised that two and a half hours had just blown by. I was sure we were an hour short, but “Battle of the Five Kings” is just that fast paced. Yet it doesn’t run out of steam, showing enough varied content within the action to keep from “The Battle of the Five Armies” from going stale.

Now there are other flaws which plagued the original trilogy as well, such as various plot devices being removed. Considering how prevalent Bard was this time around, even to where he practically steals the show from Bilbo, he doesn’t get a real ending. What happened to that stone? Considering so much time was built on it, It vanishes much like that orb in “Two Towers”/“Return of the King”. Sarumon states his intent to confront Sauron, which is presumably the beginning of his descent into darkness, but nothing comes from it, One scene where we see him falter would’ve been enough. I presume this will all be in the expanded addition, but once again, “Battle of the Five Armies” is pure spectacle. If you want to see a big, pretty action scene, this is your movie. All the other “Lord of the Rings”-“The Hobbit” films managed to balance spectacle with character and story. Certain subplots which did get focus were superfluous, such as the silly love triangle and the comedic relief (Ryan Gage), precious time that could’ve been spent on the primary characters like Bilbo, Thorin, Gandalf or the Dwarves…Or maybe they could’ve given the Bard proper resolution? The fact of the matter is, for better or worse, “The Hobbit” should’ve been two three hour long movies. They didn’t need to try to expand the story into making the events seem more epic than they originally were, they didn’t need to bring back Legolas (Orlando Bloom) for the sake of pleasing fangirls and certainly did not need to put him in a love triangle. Just focus on the adventures of a hobbit, a wizard and a handful of dwarves as they try to take back their Kingdom from a dragon. But because of self indulgence…and money…they padded everything out and it killed the flow of the narrative. But..meh, that’s not to say I didn’t have fun. For those who dismissed the previous “Hobbit” flicks as tediously paced, you shouldn’t have that problem here. “The Battle of the Five Armies” isn’t a good movie, but is is a good final battle which happens to be the entire movie. Oh yeah, the 3D wasn’t worth it. It didn’t take away from my viewing experience, but it didn’t add much and took away some cash from my wallet.

Overall: “The Hobbit: The Battle of the Five Armies” is simultaneously the worst of trilogy and the easiest to sit through. It’s pure spectacle and I enjoyed it as such, but will admit to wanting more.