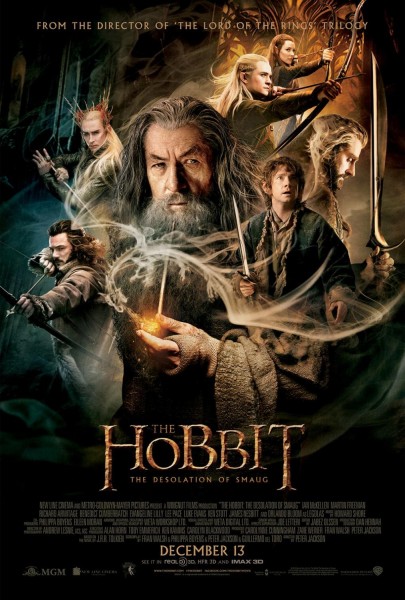 Plot: Bilbo Baggins (Martin Freeman) is the fish out of water in an adventure involving a group of dwarves who wish to take back their underground Kingdom from a bloodthirsty dragon. Their journey continues as they encounter the feared beast known as Smaug, orcs, elves and a much more sinister force.

“The Hobbit: An Unexpected Journey” was an unexpected disappointment for the vast majority of fans, although to what extent varies from viewer to viewer. Much of it is based on what you felt about the “Lord of the Rings” trilogy. Did you consider those films to be among the best of their years or the best of all time? Or maybe you thought they were (solid but) overrated, or just too slow for your tastes? Those who disliked its predecessors loathed “The Hobbit” because it represented everything they hated about the trilogy. Those who loved its predecessors loathed “The Hobbit” simply because it wasn’t the masterpiece they wanted it to be. But those who held mild opinions for its predecessors tended to like the film, even if it had more concrete flaws. I remember making sweet sexual love to “The Fellowship of the Ring” when I first saw it in theaters, as it contained everything I wanted out of a fantasy- exotic new worlds, frightening monsters, larger than life heroes and a strong sense of adventure. While audiences believed each entry improved and to some extent, I agree, but they also toned down everything that drew me to the original. The adventure was replaced with clashing armies, the narrative was broken up into three different stories (in single films) and the human lands were significantly more boring than the unique locations of the first. Part of the reason I embraced “The Hobbit: An Unexpected Journey” is that it rekindled the magic that I felt was lost in “The Two Towers” and “Return of the King“. At the same time though, I had to concede that it had a flimsier narrative and was awkwardly paced. I liked it, but I also considered it to be the weakest of the franchise (at that point) on a more objective level. Many were wondering what this meant for the sequel, “The Desolation of Smaug“. Would it be an improvement? Would it be just as good or bad? “The Hobbit: The Desolation of Smaug” is about as ‘good’ as part 1, but before detractors start groaning in disgust and giving up on the flick, I actually think you might like it. Of the entire “Lord of the Rings” franchise, this easily has the fastest pace, never letting the viewer catch their breath for about 3 hours.

Pretty much everything I said about “The Hobbit: An Unexpected Journey” on a technical level applies here too. The special effects are nearly flawless, with only the occasional shot of CGI Legolas failing to convince. I saw the movie in IMAX theaters, so everything was magnified and I could see so much detail within the visuals, from the creatures to the landscapes. Peter Jackson had a blast emphasizing the scale of the monsters, from the giant spiders to the dragon. Everything looks HUGE, which makes them scarier. Every location and set is very unique and colorful, being fairly expressionistic. But I especially love how the various creatures, whether it’s the orcs, spiders or the dragon, have their own individual personalities. My favorite moment in the film is when Bilbo confront Smaug himself, who is sophisticated, witty and scary. The action scenes are all wonderfully choreographed and framed, giving us plenty of sword and arrow fights- the participants numbers vary from battle to battle. Peter Jackson loves thinking of bizarre and insane ways to make Legolas unreasonably cool. The movie can be funny, scary, intense, exciting, sad, moving and adventurous when it wants to be, but the tone never becomes erratic. The 3D is excellent because the action sequences are filmed with the 3D in mind, so expect lots of fire breathing into the camera. I flinched and cringed plenty of times. Finally, the acting is great and the dwarves are beginning to showcase individual personalities!

As I said earlier, it’s much more fast paced. The original trilogy was leisurely paced, knowing when to speed up or slow down. The first Hobbit flick was much slower, emphasizing mood and atmosphere, but sometimes it would remain too slow for too long. But in the case of “The Hobbit: The Desolation of Smaug“, it’s pretty much one riveting sequence immediately following another. It starts with a chase scene and shortly afterwards, we get a scary scene, then a fight scene, then a prison escape scene, then a fun-as-hell water rafting scene, then a smuggling scene then a armory raiden scene, then it’s just nonstop dragon action. For a 3 hour long movie, it felt an hour shorter than that. Now, remember that just as slow paced does not automatically equal boring, a fast pacing does not automatically equal entertaining. How a film is paced is just a narrative strategy, whether you make an attachment to it regardless of how quickly it moves is another thing altogether. But for those who wished its predecessors would spend less time on characters looking into the horizon or talking and more time on clashes with the orcs or other assorted monsters, “The Hobbit: The Desolation of Smaug” seems to have you in mind. On the other hand, maybe you won’t like the emphasis on action. Maybe you’ll think it’s dumbing down the story and is losing what made the previous films so precious. I did think that many of the new characters didn’t have enough time to shine because the movie was in such a hurry. You have to make your own decision there. Personally, I’m cool either way, but I liked it here because it was different.

“The Hobbit: The Desolation of Smaug” is still a bit too long, with the love triangle subplot being especially pointless, only existing to pad out the running time and cater to fanboys in the process. Still, the actors sold what would’ve been a tedious angle and I did like how Legolas (Orlando Bloom) is kind of an asshole. In fact, this is the only Lord of the Rings flick to portray Elves in a negative light. They’re arrogant, greedy, rude and can get drunk like everyone else. In a way, that sums up my appreciation of the film. It’s different from the others, both in how it presents certain parts of the world and in its pacing. I think it’s a 3 star movie, but I enjoyed it on a 3.5/4 star level, so I’m going to be more generous. For me, the franchise is back on track. The problem is that much of “The Desolation of Smaug” is leading up to “There and Back Again“, the end of this new trilogy. Based on what I remember of the book, there are two action scenes left that the story hasn’t covered. I suspect one will be in the beginning and the other will be at the end, so if it’s going to be a three hour long movie, what will take up time in the middle? If “There and Back Again” isn’t as good, I think I might look back on “The Desolation of Smaug” with some vehemence. As much as I enjoyed this, I still think “The Hobbit” novel did not require 3 three hour long movies. But that is a tale for another time…

Overall: “The Hobbit: The Desolation of Smaug” was a very enjoyable experience for me, but it’s not for everyone. Those who want a faster paced Lord of the Rings flick though should give it a try.