Plot: An English Anthropologist (Christopher Lee) believes that he has found the missing link between man and ape, so takes careful precautions to transport the remains back to Europe, aboard the trans-Siberian express. Unfortunately, the creature turns out to be something else entirely and it’s alive. It begins killing people on the train, but even worse, it’s absorbing their knowledge and becoming smarter.

Your casual fan is likely to watch “Horror Express” due to the presence of Christopher Lee, Peter Cushing and Telly Savalas. It also helps that the movie has acquired a decent reception. But while all of this tickled my excitement, I personally was in it for the premise. I’m not very interested in trains, but films that take place within them always fascinate me. There’s just an intriguing sense of adventure and isolation about them and they are often filled with interesting characters, who deliver snappy dialogue. My favorite James Bond film is “From Russia With Love”, which takes place on a train. I happen to think “Night Train” is spectacular, probably because it takes place on a train. I’d likely list “Murder on the Orient Express” as one of my favorite movies of all time. “Horror Express”- a science fiction/horror hybrid with an amazing cast- seemed like it was designed for me, even though it was produced 14 years before my birth. But did it meet my expectations? Absolutely, although something about it nearly derailed its enjoyment factor.

“Horror Express” relies on its actors, which is good, because the script can be pretty dumb. That’s not to say its devoid of wit. Some of the dialogue is pretty amusing and its theology is rather bold and cleverly handled. But the characters constantly do stupid things, despite being intelligent. They know that the creature is within someone, yet they never suspect the most obvious victim. ONLY TWO PEOPLE WITNESSED ITS FAKE DEATH AND ONE IMMEDIATELY FAINTED. The alleged ‘science’ is pretty laughable too, like how our memories are stored and can be accessed. My favorite part had to be when they see a dinosaur through the eyes of the monster, even though it’s just a crudely drawn picture. But despite this, the cast has such conviction in their performances that I just went along with it. 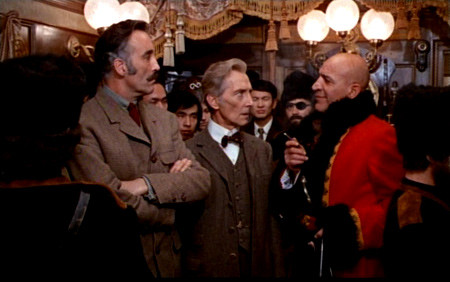 It’s always fun to see Christopher Lee as the good guy. He has the presence to carry a movie himself, but I also liked how his character is kind of a jerk. At times, you find yourself wondering if he’s going to go insane and assist the creature. Yet his development was a bit rushed. Although at least his wasn’t as hard to swallow as the Monk (Alberto de Mendoza), who goes from a pious Christian to worshiping Satan out of nowhere. Nevertheless, Mendoza throws himself into the role to such an extent that I was distracted from the awkward writing by his crazy mannerisms. Peter Cushing plays Lee’s friend/rival and has the films best dialogue. He’s very humorous, which is shocking as Cushing’s wife had just died and he was apparently miserable. Both Lee and Cushing have chemistry, but that’s nothing new. Yet I have to admit, as much as I loved those two, I think Telly Savalas stole the show as an aggressive- potentially insane- Cossack who boards the train during the last act. He’s not in the movie very much, but he was magnetic. Everyone does a good job though and the characters themselves are interesting. We have an inspector, a spy, an engineer and a count with his countess. Everyone was compelling enough.

The story moves rather quickly, spending little time before the monster is prowling around. There isn’t a lot of filler, so don’t expect any love stories. There is a refreshing twist that causes the plot to go in a different route than I had expected and there are a few solid twists. But is the film scary? I have to admit, I initially thought the film was too poorly lit to be considered as such. There was this annoying, reddish hue that obscured the darker scenes. But then I watched those parts on youtube and realized that the transfer was poor on my DVD. Whenever it attempts to be frightening, it does succeed in creating some mood. The monster looks okay, although it’s mostly left to the imagination and the red eyes were a nice touch. I thought the suspense was pretty effective and the zombie-filled finale is rather nail biting. In a way, it reminded me of a Lucio Fulci film, except without the excessive gore. The score is eccentric, being part silly, exciting and even a little spooky. The director uses sound magnificently, with the train suddenly making loud noises during an attack. That kept me on edge. I won’t pretend like I was ever scared, but it had its eerie moments I guess. 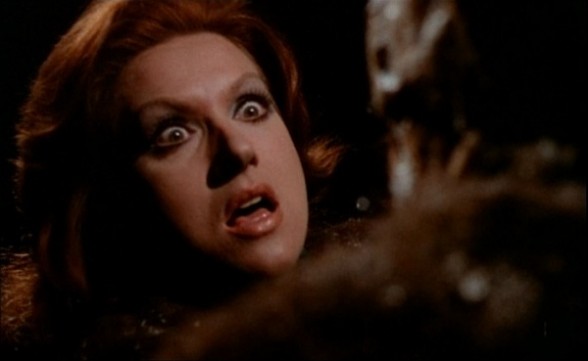 I thought “Horror Express” was incredibly entertaining. The actors get fun dialogue to work with and are allowed to play different kinds of characters. There is a certain level of humor to be found, but the movie never descends into camp. It just adds another layer to its entertainment level. That’s really what “Horror Express” is: Entertaining. If I were to compare it to anything, I guess it would be to “The Thing From Another World“, only because all the other reviewers are doing the same thing. Both are very dialogue heavy and while “Horror Express” might be sillier, I think it snagged the better actors- so I prefer it. While I enjoyed the attacks and supernatural elements, it was watching the characters interact that kept me invested. But what do you expect? That is bound to happen when your movie stars Christopher Lee, Peter Cushing, Telly Savalas and a crapload of other talented actors. Plus, it takes place on a freaking train!

Violence: It’s fairly grisly, at least a PG-13 rating. It might even be R-worthy, although I guess that depends on how strict the MPAA would’ve felt like being.

Overall: If “Horror Express” sounds appealing to you, then it’s definitely worth a watch. I liked it.