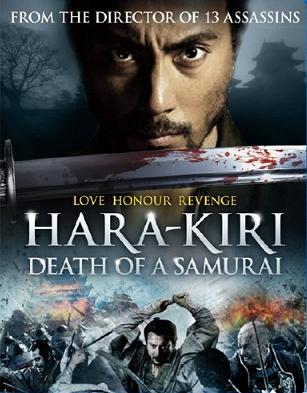 Plot: A mysterious Ronin (Ebizô Ichikawa) requests that he be allowed to commit ritual suicide in the courtyard of a respectable clan. He’s given permission, but before he does the deed, he relates his tragic tale. It turns out that maybe suicide is not really on his mind, but what is his purpose?

When I heard that Takashi Miike- A director whose films are generally made to shock and repulse his audience- was going to remake the highly esteemed “Harakiri (1962)”, I had a good laugh. Don’t get me wrong, I LOVE Miike. He is arguably my favorite contemporary filmmaker. But this is the guy whose films contained women giving birth to adult men (“Gozu”), hermaphrodites shooting menstruation blood at thugs (“Fudoh”), giant penis-shaped robots (“Dead or Alive: Final”), dudes who can rip out their souls (or was it a heart) and throw it at their enemies, causing a nuclear explosion which destroys the world (“Dead or Alive”) and…everything from “Visitor Q“. Isn’t “Harakiri” a bit too classy for the guy who gave the world “Ichi the Killer“? But then I remembered he had previously done the touching “Bird People of China”, so maybe this isn’t as out-of-character for Miike as one would think.

Miike had previously helmed “13 Assassins”, another remake of a classic Samurai flick, but it would be best not to draw a comparison. That was action. This is drama. There are only two fight scenes and they occur during the last 30 minutes (this is a 2 hour+ long film). Regardless, I have to confess that I’m not sure whether “Hara-Kiri: Death of a Samurai” was worth it. If it’s a success, it’s only because the original was that damn good. While more material has been inserted, I didn’t feel it added much and the script is nearly identical. If it’s a failure, it’s because it coasts off the quality of the 1962 film, while offering nothing new. It might be decent, but I kind of agree with the camp who believes that it’s pointless. My biggest disappointment is that Miike doesn’t do much with this tale. “13 Assassins” was a solid actioner, but I thought it was exceptional because Miike added so many bizarre, Miike-ish touches that gave it its own identity. The armless/legless sex slave, the revelation that a character might be immortal…that kind of stuff is unusual. But Miike apparently decided to restrain himself, so don’t expect to see any of Takashi Miike’s traits, other than the gruesome suicide sequence. The director could’ve just as easily been Yôji Yamada (“The Twilight Samurai“). If you’re not a Miike fan, have no idea who he is or believe his attributes could’ve distracted you from the story, then you should have no qualms with this. 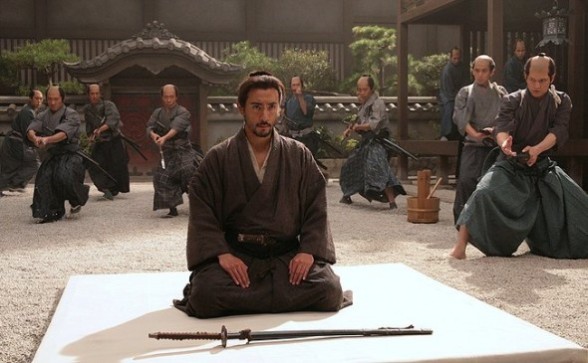 Throughout my viewing of the film, all I kept thinking was: “This isn’t bad, but the original did it so much better”. Example, Ebizô Ichikawa is an effective Hanshirô Tsugumo. He has presence and he sells his emotions with conviction. Yet he’s nowhere near as memorable as Tatsuya Nakadai was in the same role. Nakadai was impressive because his transformation meant something. He began as a noble samurai, but over time was able to become more human as he discarded that code in favor of his family. Here, the only thing that changes about the protagonist is his clothing. I don’t blame the actor. Nakadai just had more to do. Speaking of which, I could be mistaken, but the main character seems absent for a large chunk of the film. Not only is he telling a story that he apparently wasn’t there for, but it means his apparent development is undermined. I don’t remember if the original had the same issue, but if it did, it apparently didn’t bother me as much. “Hara-Kiri: Death of a Samurai” might have a longer running-time, but it doesn’t seem to have as much emotional content. I thought the original had a far more compelling narrative, revealing its twists in a more intense and startling way. Here, I just didn’t like its revelations or how it used exposition in comparison to the first one. Now, I thought the dialogue was good. It’s just that the original was better in that regard. On the flip side, I did think Kôji Yakusho was an improvement over his predecessor, primarily because he’s more morally ambiguous. But the young lovers, the villainous samurai and the other key players aren’t AS interesting. They’re not boring, but…well, I think I’ve made my point.

If Miike does anything different than his predecessor, Masaki Kobayashi, it’s in how he uses emotions. “Harakiri (1962)” was very raw when it came to the melodrama. Characters weren’t afraid to cry and get angry. Miike chose to do the opposite and make everyone act detached and cold. Instead of close-ups, Miike favors medium shots when capturing the characters responses. Initially I didn’t care for this approach, but it soon began to grow on me. I interpreted the aloofness as the characters continuing to embrace the samurai code. When Motome Chijiiwa (Akira Ishihama) is forced to sell his beloved books for three eggs, you’d expect Miike to zoom in on his facial expressions so we can know what he’s feeling. Instead, the camera is at a distance, making his ‘feelings’ ambiguous. When he drops two of those eggs, the same thing happens. The character does not openly display his emotions, as if he’s still trying to be a ‘Samurai’. The camerawork decides to reflect this, being just as aloof as the cast. Once I realized it was intentional, I began to appreciate what Miike was aiming for, even if I preferred the originals approach. 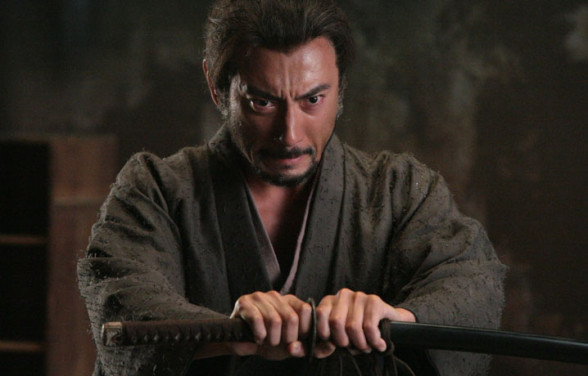 The cinematography is definitely nice, although it is fairly restrained compared to a lot of Miike’s flicks, which are unsettlingly beautiful despite the small budgets. Initially I was annoyed because I prefer it when slow paced movies emphasize mood over character drama. Had the visuals told their own story, maybe I would’ve been more interested. But over time, I began to appreciate this too. “Hara-Kiri: Death of a Samurai” is a good looking film. Sometimes it’s even artfully poetic. But it doesn’t want its visual beauty to upstage the characters, who are the primary drive of the story. Remember, this is a drama, so the characters and their interactions are the most important part of the movie. The final battle is wonderfully choreographed and the snow was a nice touch. The iconic shot of the armor, that opens and closes the story, is present. But the angle is different and while it’s not as effective as the originals, it still is fairly creepy. I loved the score, which is somber, sad and beautiful all at once. This may be even where the remake surpasses the remade, as I can’t even remember the music in the first one.

“Hara-Kiri: Death of a Samurai” is a very slow paced film, which isn’t a criticism as much as it’s a warning. But at least it was well made. There’s very little I can criticize about it objectively. However, I’ve come back to my original issue. Is it good because “Harakiri (1962)” was good? Or should it be derided because it coasts off the quality of “Harakiri (1962)”’? I almost want to say both. If you haven’t seen the original classic, you should. Unless you don’t like older movies, in which maybe this remake is more for you? But as I said, expect a drama. Not an action. I’m going to end this by advising you to look deep in yourself and make your own decision. Does “Hara-Kiri: Death of a Samurai” sound appealing? If you’ve seen the original, do you want to watch a newer- but similar- version of it? If you’d prefer something different, then maybe it’s not for you.

Overall: “Hara-Kiri: Death of a Samurai” is a carbon copy remake. Whether it deserves praise for successfully doing that or criticism for not doing anything new is up to you.