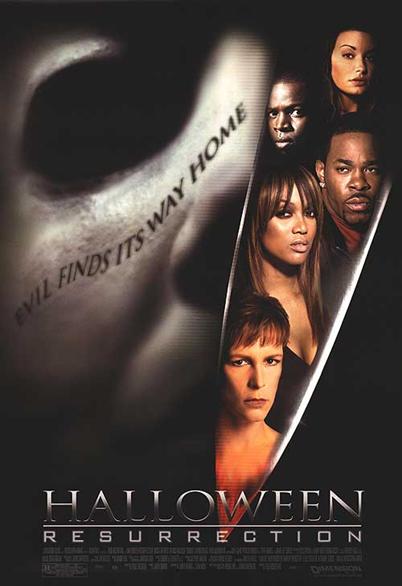 “Halloween: Resurrection” has to be the first movie I’ve ever seen where the plot actually ends around the 15 minute mark. By now, everyone is aware that the original heroine Laurie Strode is killed during the opening act. Michael’s hunt for Laurie- or his family members in general- has been the overarching story of the franchise, beginning 8 movies ago. I usually can’t stand it when former protagonists are disposed of in such lame ass ways, but I have to admit that the death of Laurie is easily the best scene within the film. It’s fairly intense, possibly because you know what is coming and don’t want it to actually happen. Jamie Lee Curtis is trying her hardest and the final scene between the siblings is rather moving. I would’ve preferred that Laurie not die, but at least she had a better resolution than Jamie Lloyd (“Halloween 6”). Yet as good as this sequence is, it’s still only the first 15 minutes. After that, you can practically see Michael standing around awkwardly, knife in hand, as he sheepishly asks: “Now what?”. The answer was to be like his little brother Jason and spend the remainder of the time killing disposable, slasher movie stereotypes. “Halloween: Resurrection” focuses primarily on Michael killing time…by…killing…people…This is what Michael does when he’s bored!

Let me actually begin with what I did like about “Halloween: Resurrection”. Director Rick Rosenthal had originally helmed “Halloween II”, which I personally feel is overrated, but it’s generally regarded as the best of the sequels (and for good reason). After that though, his career fell into the pits of (admittedly steady) television work, so hiring him for “Halloween: Resurrection” was an inspired choice. You know what? He’s a damn fine horror director. He stages plenty of creepy shots, utilizing the lighting, shadows, camera angles, dilapidated location and music for maximum impact. The cinematography is fantastic and even if his film isn’t especially scary, it is fast paced and can be somewhat intense at times. Finally, this has to be one of the spookiest incarnations of Michael Myers to appear within the franchise. The slow walk…the mask…how he would kill people…if only this Michael and this director had a better script to work with. In fact, I said similar statements regarding “Halloween II”, but the screenplay for “Halloween: Resurrection” makes that look like an Oscar contender. 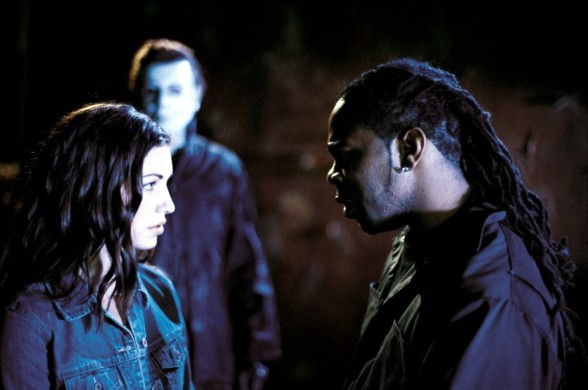 I’ve already stated how the plot pretty much stops during the first 15 minutes and that the remainder of the screen-time is more-or-less filler. But what other sins does “Halloween: Resurrection” commit against fine slasher cinema? Let’s begin with the characters. Sara (Bianca Kajilch) is our new heroine and her personality is so generic that the actress barely has any room to ‘act’. Her character arc doesn’t make a lot of sense either. The exposition 101 scene (contrived classroom sequence where the teacher discusses a theme of the movie. It’s bullshit) suggests she must overcome her ‘fear’ over the course of the film. But…what is she afraid of? It’s as if the writers intended on giving her a traumatic back-story, but then forgot to include it in the screenplay, because she’s just jumpy for no reason. It’s even stranger when she starts seeing visions of Michael Myers, before actually running into him. I’ve heard that originally, it was going to be suggested that Michael is stalking her, apparently in an attempt to bring back the more abstract Michael from the original “Halloween”. But presumably the writers realized that would be too contrived, so they removed it and her ‘fear’ lacks the proper context. She’s also in sort of an online relationship with Miles (Ryan Merriman), even though she seems way too hot to do that. That was just a dumb, waste-of-time subplot which seems designed to pad out what is already filler. Ugh, I miss Dr. Loomis, Jamie Lloyd and Laurie Strode. Fuck, I’ll even take remake Laurie Strode. She might have been kind of annoying, but at least she wasn’t boring! Sara has to be the dullest character IN THE ENTIRE FRANCHISE.

The supporting cast is…bleh. Everyone complains about Freddy (Busta Rhymes), but do you know what? I was fine with him. Yes, the kung fu noises were obnoxious and the supposedly badass one-liners were retarded, but at least he was having fun with the role. I also think Busta Rhymes has charisma, so he entertained me. Had “Halloween: Resurrection” been good, however, I probably would’ve agreed with everyone else considering how much his presence screws up the tone. But in a bad movie, I’ll take whatever fun I can get. Everyone else has a single attribute to their characterization. The blond chick is loud, the smart chick is smart, the men are horny and the token black guy likes to cook. So in the latter’s case, everything that comes out of his mouth will tie into food. Everyone else is the same way, doing and saying things which tie into their one character trait. The acting is okay, I guess…Once again, there isn’t a whole lot of room for these people to actually act, but other than those orderlies early on, no one gives a bad performance. I even liked Sean Patrick Thomas, despite him having the most ridiculous gimmick. But decent acting does not make up for boring characterizations. 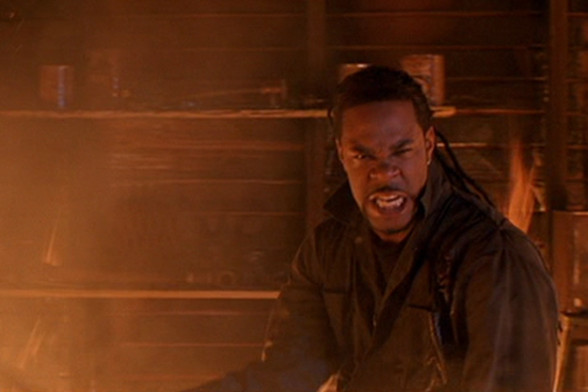 The Exposition 101 scene is even more forced than usual (‘the boogeyman inside of us’), the tone was all over the place (watching Sean Patrick Thomas use…cooking…to fight Michael is only slightly less retarded than having Busta Rhymes making Bruce Lee noises when fighting Michael), and the kills…Actually, I think the worst aspect of “Halloween: Resurrection” is how lazy it can be in regards to killing off the cast. I’m not referring to the kills themselves either. What I mean is that whenever someone has to die, the in-movie music will be turned up really loud so no one can hear them scream. Nora (Torra Banks) is talking to an upcoming victim through a camera, but turns away so that she won’t witness his death. Whenever somebody dies at first, the camera will become fizz out (but works later on) so the story can continue without the victim fodder discovering that they are probably going to be victim fodder. Even most bad slasher films aren’t this contrived! I’m not sure what’s worse, the plot hole ridden, poorly thought out screenplay for “Halloween III” or the uninspired, lazy and mundane script for “Halloween Resurrection”. At least the former had some ambition, so I think I’m going to have to give the award for worst writing in the Halloween franchise to this one.

I will admit that I prefer “Halloween: Resurrection” a little bit more than “Halloween H20“, even though the latter has an actual plot. It has more of a ‘bite’, which was sorely lacking in its predecessor. It’s also superior to “Halloween 5“, which was just downright tedious. But that just means it’s not quite as bad as those films. It’s still pretty bad. The problem is that “Halloween: Resurrection” dumbed down the franchise to where they might not even call it ‘Halloween’ anymore. This plot could’ve easily been used for “Friday the 13th part whatever“…or any other slasher. It confirmed that the story which began in “Halloween” had run its course. I couldn’t even bring myself to be that angry with the 2007 remake, because that was pretty much the only thing the franchise could do. This movie is just really pointless.

Overall: “Halloween: Resurrection” would be an acceptable slasher if it wasn’t called ‘Halloween’, but it is…So it’s not acceptable. The movie ends after the first 15 minutes and the remaining hour is just filler. Of all the entries within this ‘flawed’ franchise, I wish this one didn’t exist the most. It’s not the worst, but it pretty much killed the franchise.