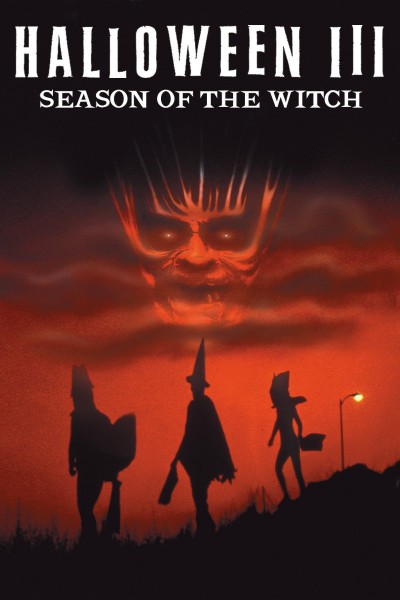 If it was 1982- four years before my birth- and I was watching movies at an age where I’d actually critique them (on paper, online, or in my head), I would have ranted and raved about “Halloween III: Season of the WHERE THE FUCK IS MICHAEL MYERS”. I would’ve damned the film as a failure and spat on its corpse…before having my way with it…But it’s not 1982. This is 2015 and to all of you watchers who bitch and moan about the lack of Michael Myers, I have this to say to you: Get over it. It’s been 30+ years. Don’t you have plenty of other shitty Michael Myers movies you can watch? I have forgiven “Halloween 3” for excluding Michael Myers and I’ve even grown to respect it. Since this film bombed, Michael has returned and he’d jump onto whatever bandwagon was trending at the time- greatly watering down his prestige. “Halloween H20” for example, was made to cash in on the “Scream” craze. So I have to give props to “Halloween 3: Season of the Witch” for trying to be different and taking some risks…Even if it is not a very good movie.

Okay, let me start off with what I liked. Tommy Lee Wallace worked with John Carpenter on “Halloween” as art director/production designer and Carpenter’s influence shows on-screen. “Halloween 3” boasts a visual style and sound design reminiscent of an early John Carpenter flick. In fact, Carpenter even did the score. The music is phenomenal in its simplicity. It’s haunting and there are plenty of weird and memorable sounds, including that ‘catchy yet maddening’ tune. When a character is yelling “Turn it off!”, we are certainly in his shoes as that damn music is playing, although this isn’t a complaint as it’s supposed to be that way. But Carpenter’s score only enhances the spooky imagery that Wallace provided. Both men have an identical way of building suspense and startling us, often at the same time. Furthermore, there is so much detail in how shots are framed and I always got the impression that Wallace put everything on screen exactly the way he envisioned. This makes the film aesthetically intriguing while also stressing the Halloween-ish (talking about the holiday, not movie) atmosphere. In fact, the holiday motif is more prominent here than it is in the Michael Myers movies. Of course, Carpenter and Wallace shared the same cinematographer- Dean Cundey, who was DOP for “Halloween“, “The Fog“, “The Thing“, etc., which might explain the similar visual styles. “Halloween 3” is very nice to look at.

I’d say the film works in parts, usually when something exciting is happening. When there is a chase or stalk sequence, it is edgy and frightening. When there is a bizarre, grotesque gore moment, it is rather unsettling and cheesy- but in a fun kind of way/ The film has balls, exploiting a subject matter that you don’t see exploited very often (not even children are safe!). Furthermore, I found the ending to be incredibly effective and chilling. Tommy Lee Wallace did a great job as the director, while failing miserably as the writer. Because when the focus is on telling the story, expositing information, fleshing out the characters or anything that doesn’t involve the macabre, it can get pretty awful. How does one dissect a script that can’t do anything right? Um….

Okay, okay, that would be too easy. Well, the first major problem comes down to the plot. It’s obvious that the writers had a premise and probably a handful of scenes planned out (including the ending), which is usually how the first draft of the script begins. In most cases, the writes will then come up with ideas for the remainder of the content, scene-by-scene. Yet…”Halloween 3” feels like the first draft was what they used to enter production, as it doesn’t seem like the writers thought any of this through. The story is largely convoluted, filled with nonsense like that Stonehenge subplot. Being convoluted is bad, but it’s worse when it raises so many questions that distract us from everything else (um, how did they steal it actually?). The better ideas are mostly wasted in order to make room for the scripts dumber attributes. The film suggests that the townfolk are in on the conspiracy and the narrative begins to play up the ‘foreigner trapped in an isolated village’ angle for about two seconds and then it’s promptly forgotten. Another two second subplot is the curfew. There is this big deal where curfew is announced, but then the next scene is the protagonist walking out of the liquor shop. Um, why waste our time with that if it serves no purpose? The worst lapse of logic in the whole film has to be a “Screamers”-esque twist, which left me with even more questions! None of the twists, turns and general concepts hold up if you spend any time thinking about them. I can accept a dude trying to kill kids using Halloween masks. That’s fantasy. But everything else is just stupidity.

What about the characters? Challis (Tom Atkins) is introduced as a drunk and a deadbeat Dad, and they REALLY play this up in the first few scenes. I’m not really sure why this was here, as I found it hard to sympathize with him because the film never really resolves these issues. I’m also not sure why he decided to go on this little quest, unless the implication was that he just wanted to get away from his annoying kids. This could’ve made for good character development, but it’s as if the writers forgot about it. The main gal is about as generic as can be and her romance with Challis is predictably rushed. This actually might be justified by the big dumb twist, but it merely adds one of the many questions this movie doesn’t bother answering. The villain is the most likable character, probably because of the actor portraying him. But his motives are iffy and his reasoning behind everything is rather…stupid. Everyone in this film tends to deserve death by being so irritating. I guess I should point out the bizarre sense of humor, personified by this over-the-top family whom are killed in the most insane way imaginable. “Halloween 3” has a satirical edge, but it doesn’t know what to do with it. I thought the acting was average and the writing often works against the cast. Dan O’Herlihy is a blast as Cochran and he easily steals the show. But otherwise, the actors struck me as confused and unsure how to deliver their lines.

In fact, it’s the meandering pace of the film which proves to me that “Halloween III: Season of the Witch” had absolutely no idea what it was doing. Large chunks of screen-time crawl by without anything substantial occurring, forcing the audience- or at least me- to focus on the weak writing. I can accept that horror films are often rushed into production, which usually explains the stupidity- and even that ceased being fun to laugh at after awhile. “Halloween 3” is just…kind of boring. Maybe 50% of the content kept my interest, but the rest is dull. There were too many periods where the narrative stalled, like it was inwardly debating what to do next. I believe this is because the story would’ve packed more of a punch if it was some sort of television special (ignoring the gore). It has enough cool concepts that it would’ve worked fine in those confinements. But this is a 90 minute movie and at least a third of that is dragging its ass, unsure where it wants to go. Boring is never a good term to describe a horror film, but boring this often is. Jeez, I have all these complaints and not one dedicated to the lack of Michael Myers.

But as boring, stupid and ridiculous as this movie can be, it’s not awful. I like a film with its own kind of atmosphere and I like that it sometimes captures the magic that was found in “Halloween”, while forging its own path. Even the many sequels that would follow failed to be as cool as the original, but sometimes “Halloween III” manages to be that cool. It’s just that the rest of the time, the movie is sucking something dreadful. A good and a bad movie are at war here, it’s just a question of which will win out for you. At the absolute least, “Halloween 3” is better than “Halloween 5”…and “Halloween H20”…and “Halloween Resurrection”…and “Halloween II”. Er, no, the Rob Zombie “Halloween II“! Grrrr! WHY MUST I BE FORCED TO CLARIFY THAT! Over the years, this controversial third entry did earn a small-but-dedicated fanbase. I sincerely believe “Halloween 3” deserves its appreciative audience, even if I’m not really part of that group.

Nudity: I don’t really remember. There is off-screen sex and one girl does get out of the shower, so we may have seen blurred nudity there.

Overall: “Halloween III: Season of the Witch” is a battleground, where an army of positives and negatives fight to the death, the winner remaining unclear. I love a lot about it, but hate the rest. Watch at your own risk, but don’t be a tool and whine about the lack of Michael Myers.

(Note from Author: I brushed up this writing, finding it to be adequate enough to use as my primary review. Back then, I wrote more elaborate plot descriptions, but stopped as it seemed redundant. This was cut out from the above review.

Dr. Dan Challis (Tom Athkin) is called in to treat a man who we had previously seen being chased by mysterious men in gray suits. The man rants about how ‘they will kill us all’, but Challis brushes his claims off until one of the gray suits kills the man violently and proceeds to burn himself to death. This leads him to meeting the victims daughter, Ellie (Stacey Nelkin), and the two decide to investigate. They learn that her Father was last seen going to visit a factory where these popular Halloween masks are produced. They follow the trail and realize that something horrible is being planned and the masks are the key.