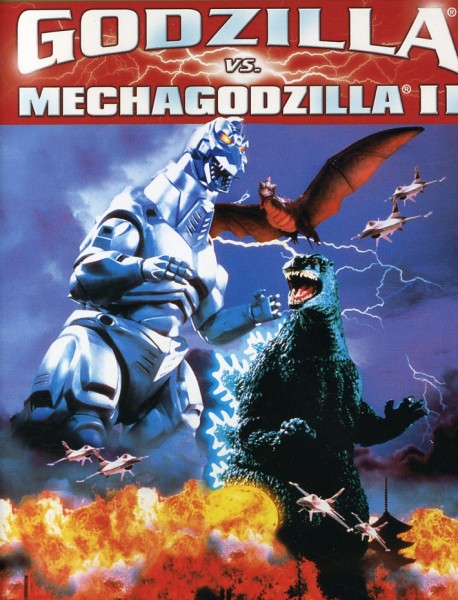 Plot: G-Force discovers the remains of Mecha King Ghidorah and recycles its parts in order to create Mechagodzilla, a giant robotic version of Godzilla. When they discover that Godzilla has a second brain…in his ass…they decide to target that…his ass…But to lure him out, they must use Baby Godzilla.

Wow, it’s been a long time since I’ve reviewed a Godzilla movie. Fans of the series will likely know that the films are divided into three categories: The Showa Era (1954-1975), the Heisei Era (1984-1995) and the Millennium Era (1999-2004). If you asked the majority of the fans what their favorite ‘era’ was, they’d likely respond ‘Showa’, which is definitely the most iconic. Personally though, I think I prefer the Heisei movies. It’s strange too, because as a kid, I had very little interaction with the Godzilla flicks from the 90’s. I remember salivating over the Space Godzilla, Biollante and Moguera toys, because who did not own a Moguera toy when they were little? But I rarely got the chance to view any of the films. Yet when I finally was able to watch them, I was surprised at how consistently good they were. They were exciting, enjoyable and well-crafted monster movies. “Godzilla Vs Mechagodzilla II” is an exciting, enjoyable and well-crafted monster movie…and yet it’s still one of my least favorite Godzilla flicks of the 90’s. But that just goes to show how good the decade was to the franchise…well, if we pretend 1998 didn’t exist…

When I reviewed “Pacific Rim”, I complained that even though the Godzilla inspirations were obvious, the monster designs were kind of bland. They weren’t Toho, but it’s often easy to forget that Toho often would recycle previous monsters instead of inventing new ones. After “Godzilla Vs Biollante” bombed, they decided to play it safe and use existing monsters as the enemy. So for “Godzilla Vs Mechagodzilla II”, they chose to bring back Mechagodzilla, Rodan (Radon in this movie) and baby Godzilla (who is not Minilla). I’ve never understood the obsession with Mechagodzilla. He was pretty cool in “Godzilla Vs Mechagodzilla” and “Terror of Mechagodzilla”, but in those films he was an alien-robot. “Godzilla Vs Mechagodzilla II” and future entries like “Godzilla Against Mechagodzilla” and “Tokyo SOS”, would portray him as a vehicle. His design is much curvier than it was in the showa days, making it appear less menacing, but that was sort of the point.  I liked the idea of Super Mechagodzilla, but didn’t feel it was used enough. Godzilla looks awesome though. This was during his anti-hero days, so he didn’t like quite as scary as the one from “Return of Godzilla”, but his appearance is pretty frightening anyway. Rodan looks fine. They do a lot more with his facial features, but Rodan is a visual effect that hasn’t aged well in all of his appearances. The ‘flying’ just looks odd. I was surprised how much I liked Baby Godzilla. His size is inconsistent and he does look pretty silly, but they did a good job at making him so cute. The little rascal even has a personality…In fact, that’s one of the things I adore about this era. The detail in the animatronics allows the monsters to do more with their facial expressions as well as their body language, making the monsters more into characters themselves instead of just being props for mass destruction.

My favorite action set pieces had to be when Godzilla rampages through the cities. I thought the miniatures were very convincing and I prefer it when Godzilla isn’t THAT much bigger than them. When Godzilla is too large, it becomes obvious that the budget was slashed and they had to build smaller city models. So I’m always thrilled when Godzilla is just big enough to where he can interact with the city, instead of merely walking over it. The green screen work of people running in the foreground while Godzilla causes havoc in the background was effectively utilized. Some of the shots of Godzilla towering over the people were just freaking scary. The director does a superb job mixing up wide shots and close-ups, both of which succeed at making Godzilla look like a giant monster and not a dude in a rubber suit. There’s also a lot more explosions than usual, which I have to imagine wasn’t very safe for the poor stunt man. Unfortunately, as good as the action is, I felt the fight scenes were rather flat. While the monster suits look better than ever, it doesn’t appear they were very mobile. This actually would became a re-occurring complaint regarding the Heisei era. Even I prefer the wrestling matches of the Showa Days more than this.  So the fights are mostly just monsters firing energy beams at each-other. It should be noted that there are some ‘off’ moments in regards to the effects, but they only stand out as awkward because the rest of the visuals were wonderfully realized. The music, a nice spin on Ifukube’s classic score, is still fantastic though. It’s not my favorite rendition, but I always get a kick out of hearing these themes.

At first, I was going to criticize the script for being kind of stupid. I especially had to fight laughter when a scientist theorizes that the egg turning red has something to do with its emotions. But almost immediately after that baffling bit of science, we’re introduced to Miki (Megumi Odaka), who appeared in the majority of the Heisei Godzilla films. She’s a psychic, so I remembered that Godzilla science fiction is more fiction than science, so forgave the films zany logic. But the quality of the writing can be rather baffling. Why is the protagonist learning karate to fight Godzilla? Is Baby Godzilla the actual son of Godzilla? They say early on that he’s part of a less aggressive species, so that should mean no, but dialogue in the ending suggests otherwise. What the hell was up with Rodan suddenly becoming friendly with Godzilla? Talk about deux ex machina! What were they thinking when they put Godzilla’s brain in his ass? Why doesn’t the military ever try that again? But…I’m not going to lie, my mind might say no but my…body…for some reason…says yes. When Rodan saves the day, I cheered. When he uses that bullshit power, I swooned. When it’s revealed Godzilla’s brain is in his rear…I laughed. So at least the scripts more baffling moments are entertaining. Furthermore, I thought everything moved at an adequate pace. It balances action with story and character rather well and the non-monster scenes are surprisingly engaging…even though the dubbing makes it difficult to take any of them seriously. 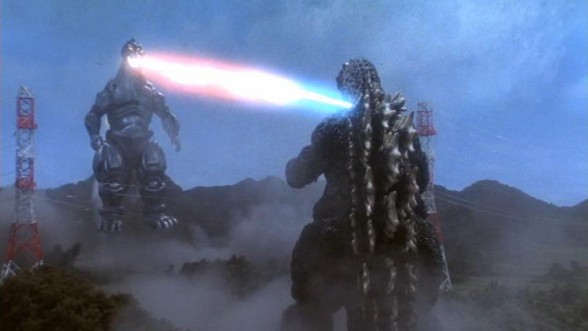 The biggest problem with “Godzilla Vs Mechagodzilla II” is that even though it accomplishes everything it set out to do, it never excels like other entries within this franchise did. Other films of the Heisei Era, both before and after this, would produce better monster designs, special effects, fights, human characters and more compelling stories. I’m not saying this one failed in any of those ways. It’s just not as good as the others.  Nevertheless, “Godzilla vs Mechagodzilla II” is a very entertaining Godzilla flick, even if I wouldn’t call it particularly memorable compared to the others. There is one other thing I want to point out. I really don’t like how we’re supposed to sympathize with Godzilla in parts. The girls don’t want to kill Godzilla and during the ending, even state ‘take care’ to the big lizard. But in this continuity, Godzilla freaking kills people and much of it doesn’t appear to be accidental. Why are they putting his life above the lives of others? Even when he saves the day, it’s usually because the villain was on his turf. But still, I did like how it’s the military who provides the major threat this time around. Plus, they would discuss this dilemma a bit more in “Godzilla Vs Spacegodzilla“.

Violence: There is some monster violence. PG-13 worthy.

Overall: “Godzilla Vs Mechagodzilla II” is a very entertaining, albeit unremarkable monster movie. All Godzilla fans…probably have already seen it by now.