Plot: Hsiao-erh (Tao-Liang Tan) discovers that he is the product of an affair between a woman and a…statue (!!) and has to learn a mystical kung fu from the statue-men in order to take down a regime and save his Mother.

On Christmas of 2012, I received a kung fu movie set titled: “Fistful of Kung Fu”. I didn’t recognize any of the movies and I’m always wary of box sets, because usually the transfers just blow. Over a year later, I’ve decided that I need to watch and review all of the films I own and “General Stone” was selected by random. Immediately the flick reminded me why I hate box sets, because as I suspected, the transfer was awful. The footage looked grainy and a lot of shots looked out of frame. I did get some laughs out of seeing the camera try to correct itself in the middle of the line, but either whoever converted this movie to DVD had no idea what they were doing or “General Stone” boasted the worst cameraman of all time (I suspect the former). But what really made my jaw hit the floor was when the primary gimmick- the selling point of “General Stone“- was revealed. Our generic protagonist, Hsiao-erh, lives with his Mother but knows that his Father was the legendary General Stone. He soon meets his Father and to his…what is shockingly not horror…he discovers that his Father is a Statue! Yes, apparently his Mommy had sexy time with a statue…When it comes to determining what makes a great film, I have two standards of quality. The movie must contain either fire breathing, mutant, killer zombie sushi OR statues impregnating women the old fashioned way. Since “General Stone” contains the latter, that automatically makes it one of the finest kung fu films of all time.

“General Stone” made me laugh my ass off. From the technical glitches that were either brought upon by poor camerawork, editing or transfer to the hilariously shoddy production values: I always laughed. Well, I take that back as the transfer did bug me and the characters constantly screaming “Ma!” or “My Son!” somehow got old even before they started yelling that shot. But everything else, whether it was the goofy statue men effects or the floating skulls, cracked me up. The acting is incredibly hammy, but the dubbing is insanely stiff and they go WONDERFULLY together. It’s always nice when you can’t keep a straight face just because someone is talking. There are a lot of clichés, but the execution made them highly amusing- like the EEEEEEVIL villain laugh or that music which seems to appear in every single kung fu flick ever made during the 70’s. The sound effects also raised one of my eyebrowa, as they don’t sound like…anything they’re supposed to be. When the villain is wielding an arrow-less ‘bow’ (??), every time the band is pulled, there’s this bizarre sound that made the rest of the fight difficult to take seriously. Of course, part of the appeal is that “General Stone” is taking itself very seriously. More often than not, the finest comedic gold comes from comedies that aren’t aware they are in fact comedies. Compare this to “Shaolin Temple 2: Kids From Shaolin“, which tried to make me laugh so hard that my ears and eyes began to bleed, while I screamed in agonizing pain. I have said it before and I’ll continue to say it as many times as I have to, but I’m not a fan of Hong Kong comedy during the 1970’s. Too noisy. “General Stone” is only funny because it’s trying- and failing- to be a sincere drama…about statue men who can sire children… 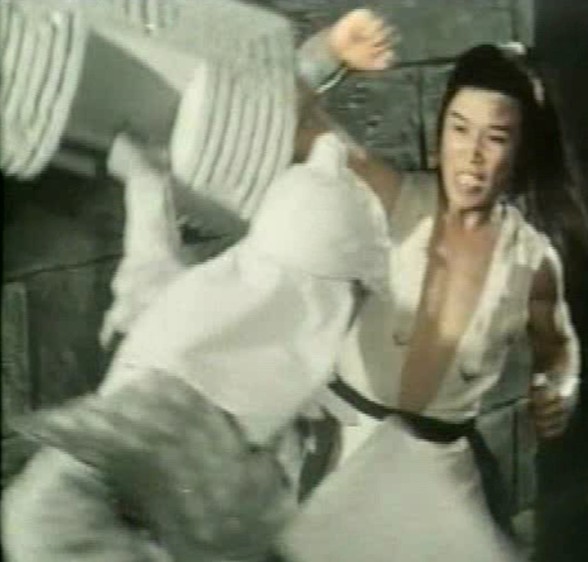 This movie is so obscure that I had to make my own snapshots. Sorry for the poor quality. It was the best I could do…

So “General Stone” works as a film which is so bad, it becomes delightfully good. Does the Kung Fu continue that tradition? Sort of. There are some very wacky gimmicks, like one character fights using…fishing skills? Then of course one must contend with the hero taking on statue men, floating skulls and other bad special effects. Whenever someone shows off a form, it looks more goofy than impressive. But if you look past that, you might be surprised that the choreography is surprisingly good. It’s nothing special, but it is better than the rest of the movie on an objective level. At first, the battles are a little crude, but they improve as time moves along. Everyone moves fast enough (at one point, the camera is even sped up), there’s enough diversity among the styles and there are plenty of different scenarios the heroes must fight out of of. One vs One, One against Many, Many against Many and there’s a balance of hand-to-hand and weapons combat- So there’s a variety of fights to enjoy. But above everything, the choreography has a rhythm because the movements are never stiff or slow. “General Stone” also has A LOT OF ACTION under its belt. I’m pretty sure 90% of the running-time was dedicated to ass-kicking.

Yeah, “General Stone” is technically a pretty crummy movie. The plot is thin, only made noticeable by the absurd additions of the supernatural and what should be a simple story is told very poorly. I didn’t understand a lot of the plot twists and questioned some of the writing choices. Why have the Mother get rescued off-screen if she’s only immediately going to be captured again? It obviously had a low budget and while I did like the leading lady, the hero himself was pretty boring. He had good (on-screen) martial arts skills, but he’s playing a standard, generic role. Yet in spite of all of these weaknesses, I found myself really enjoying “General Stone”. It’s so daft and strange, while also being able to boast a continuous stream of surprisingly good action sequences. When it does play in the crap film sandbox, it usually does so in a way that made me laugh. The “Fistful of Kung Fu” boxset now has my attention and I can only hope the rest of the entries are this crazy. I just wish it would get a proper transfer.

Violence: It is surprisingly violent, easily warranting a Rated-R. Sometimes the violence makes no sense though, like when a character is mortally wounded by an attack that appears to just graze her arm.

Nudity: None. Part of me does wish there was some statuexWoman smexing on-screen, but perhaps that would be too amazing.

Overall: “General Stone” is worth watching if you want to see a lovably bad kung fu flick that’s alluringly bizarre when it comes to its content. It alone has made the “” boxset worth it.