Plot: Humanity is forced to flee Earth when they lose the war against Godzilla, the ‘King of the Monsters’. But 20,000 years later, they cannot find a new homeworld and are running low on oxygen, so must return to reclaim their planet…which has been overrun by giant monsters.

I was skeptical as to whether anime was a large enough medium to contain Godzilla, although I have to admit that I couldn’t quite settle on a reason ‘why’, especially as it’s not like this was Godzilla’s first foray into animation. “Shin Godzilla” played a major part in convincing me that this could possibly work because of its own anime influences and one deleted scene in particular intrigued me, where Godzilla starts vomiting radioactive blood. They were unable to finish the special effect, so the scene was scrapped, but it was a pretty spectacular idea as you would see an obscene amount of blood filling the streets and popping the tires of cars. I would’ve loved to have seen this visual completed, but it was simply too expensive of an idea. This made me wonder if live-action cinema was the medium that was restricting what could be done with the King of the Monsters, as anime thrives off those kinds of visuals…and then “Godzilla: Planet of the Monsters” had its full synopsis revealed and…holy shit, it sounded so bizarre…maybe even to the point of ridiculousness! The story has Godzilla and the other Kaiju emerging from the depths of the Ocean and conquering humanity…and when aliens arrive to save us, they get their asses kicked too…forcing everyone to flee the planet and live as Space Nomads. But when oxygen gets low, they find themselves forced to return to Earth after 20,000 years, where the entire planet has evolved to kill us…and Godzilla wants to kill us too…and I’m pretty sure “After Earth” might’ve inspired this scenario and that movie also wanted to kill us…But now I was excited, as there is no way in hell that this concept would ever be used for a live-action feature. Whether “Godzilla: Planet of the Monsters” is good or bad, at least they’re utilizing the medium to its fullest…

I want to begin by saying that I REALLY don’t like it when CG animation is stylized to resemble anime, as it just looks visually unappealing to me. I found it off-putting in “Dragonball Z: Battle of Gods” and it is the primary reason why I could never muster up the interest to watch “Dragonball Super“, even though I grew up on the original show. I just don’t think the character models mesh well with the backgrounds, the facial expressions look uncannily empty and their movements look ‘off’- and this is in the better examples of “CG anime“, which this is not…”Godzilla: Planet of the Monsters” isn’t really the worst of its kind either, as it’s adequately animated…sometimes…For the most part, I’d say the animation itself was just subpar. My biggest complaint here was the character designs, which are so interchangeable that I would get important, named characters confused with each-other. Godzilla’s design is reminiscent of the 2014 American movie and even though I have nothing against that creative decision, the CGI and coloring just made the monster pretty boring to look at. It’s just a big mass of dark colors…The atomic breath leads to some cool visuals though and I did like how there were mechs, space ships and mutant plant life, which gives the film some visual flavor. Furthermore, as much as I complain about the animation style, there are a few REALLY awesome moments. The finale in particular took my breath away. While I’m on the positives, special mention goes to the score, which pays tributes to the classics while also having its own sound. At the absolute least, the soundtrack was more memorable than the 2014 American movie. 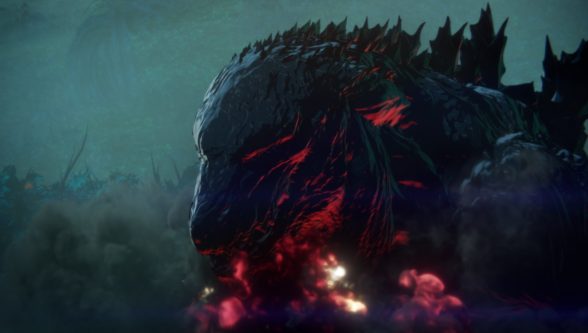 “Godzilla: Planet of the Monsters” is luckily short enough that its cocaine fueled pacing never burned me out, which is a little impressive because the film has seemingly…5 f@cking stories it has to unpack within an hour and a half long running-time. We get Monsters emerging and rampaging, aliens invading and befriending humanity, Mechagodzilla being built and subsequently failing, humanity fleeing the planet and becoming Space Refugees, heroes rebelling against a corrupt Space Committee and grandparents dying…and that’s just the first 10 minutes! 98% of the dialogue seems comprised of characters explaining how everything works in this universe, but it’s so dense with fake science that I often had difficulty keeping up. I wasn’t entirely sure what their plan to kill Godzilla was until…after the movie was over? I figured it out once I thought about it, but once again, “Godzilla: Planet of the Monsters” moves so quickly that there is no time to think…nor is there any time to get invested in the characters and their relationships. One guy really hates Godzilla and wants humanity to reclaim their planet and that is the extent of his personality (“Attack on Titan” much?), but he is a three dimensional character compared to everyone else, whose personalities are…their jobs? Hey, even though one dudes entire characterization can be summed up as “he’s a scientist”, at least he presumably earned that title! The token female character doesn’t even get that, as the extent of her personality is…the main guy seems to like her…That is her function in this story…Yikes… So the movie was all style over substance, except I don’t really like the style they were aiming for, so I can’t say I am a fan…But I also didn’t dislike this either and I think there are two things that keep “Godzilla: Planet of the Monsters” afloat. The first is the novelty of seeing Godzilla in this weird f@cking storyline and in an animated format, so even if it’s a bad or mediocre movie, it’s still a distinct one. The second is that the story is still ongoing, as it’s being told over the course of a trilogy and it’s possible the sequels will flesh out the characters and make something special out of its storyline. If “Godzilla: Planet of the Monsters” exists to set up the real story…and the real story is actually good…then maybe I can accept this as a full length feature prologue, instead of dismissing it as an underdeveloped, sloppy movie. I’m interested in what happens next, but if what happens next is equally unimpressive, I might become a lot more hostile to this one. We’ll just have to see, but I’ll remain hopeful for now. If you aren’t a Godzilla fan, don’t watch “Godzilla: Planet of the Monsters“, as you’ll immediately get lost with all of the references to previous Godzilla continuities. But if you are and you have netflix and don’t mind anime, it’s not so bad that I would say it’s actively worth avoiding.