Plot: The Shelly’s (Julian Sands and Natasha Richardson) stay at the Gothic manor of Lord Byron (Gabriel Byrne) and tell ghastly tales of terror. But their night is about to become a nightmare, when their fears start manifesting themselves in reality.

I knew very little about “Gothic” when it found itself playing on my television, although I did presume it would provide Gothic set pieces (ha!). I was only partially paying attention during the prologue, which might’ve clued me into the nightmarish ride I was about to experience. To be honest, I spent the bulk of the movie unsure what I was seeing. I can only sum up “Gothic” as a bad trip, but it’s a mesmerizing one. By the end of the film, I realized this was a “what if?” story about the conception of the “Frankenstein” and “Vampyr” novels. “Gothic” is really fucking weird, a movie that loses itself in its manic psychosis. But it seduced me and drew me into its world.

The first act of “Gothic” is pretty hard to swallow. We’re introduced to our principle cast, but they aren’t especially likable. Most of them are shown to be selfish and insecure, haunted by their inner demons. But the worst offense is their obnoxiousness. They are loud, annoying and spew out gag inducing dialogue. I suppose this is expected from a group of poets, but you sort of want to punch everyone in the face. This is especially apparent with Percy (Julian Sands), who needed to shut the hell up. I’m a fan of Sands, but his unrestrained performance was maybe a bit too over-the-top. On the other hand, Gabriel Byrne was magnetic as Lord Byron. He’s charismatic, yet has a cruel streak, but we’re not sure how evil he is. As annoying as these people are, unlikable is not to be confused with boring. At the absolute least, everyone kept my interest and the scenery chewing added a healthy level of camp. 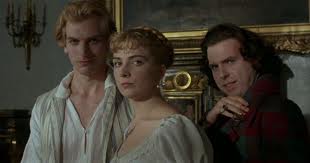 I didn’t start scratching my head in confusion until the middle block or so, because I had no idea what to expect. Possibly because I overlooked the initial premise, I figured the movie would be about Lord Byron either killing his guests or attempting to turn Marry to the dark side. It’s suggested early on that he might be a vampire- or have vampiric tendencies- or he could be the devil himself. We’re not sure how depraved he is, but there was enough build up for me to presume that he was the main villain. But as time went along, my beliefs began to shaken. Even HE seems unsure as to what is going on, although he’s never completely rattled by it either. Weird, random events start plaguing our heroes and there are a few possibilities. The first is that all of this is in their heads. Their fears have begun to consume them. The second is that Lord Byron has supernatural ties and is making everything happen. The final possibility is that their seance created something evil. The mystery surrounding everything was captivating, although this is a purely subjective statement. You might find the ambiguity to be cheap and frustrating, obscuring what is probably a weak narrative. Much like the acting, you have to make the decision about whether it works or not yourself.

The structure for “Gothic” loses all traces of sanity during the third act. Don’t get me wrong, spooky imagery is present throughout the rest of the film. But during the finale, there is no longer any restraint to the visuals. They cease making any kind of sense, as if the director had plenty of nightmarish ideas, but had no idea where to include them. So he just forced them into the finale. This could be seen as a negative point (and for many, it will be), but I enjoyed the chaotic nature of it. It added to the trippy atmosphere that “Gothic” had worked so hard to establish. The filmmakers snagged a great location in that it’s actually quite gorgeous. As much as I enjoy cob webbed, castles that reek of doom, it doesn’t make sense that a hedonist -who just wants to party- would live there. It’s the manor’s weird additions that add to our unease, such as the stripping, robotic mannequin. It’s just so…BIZARRE. But as “Gothic” progresses, everything starts getting darker. The setting ceases being fun and starts becoming menacing. The sex turns grotesque and the breezy atmosphere becomes oppressive. The director has a knack for dreaming up creative and disturbing ideas for visuals, such as the breasts that have eyes for nipples. I wouldn’t call “Gothic” scary, but it is freaky.

Anything else I can say? I liked “Gothic” for the reasons that its detractors hate it. But everything I like about Wes Craven, Dario Argento and Lucio Fulci can be found here. “Gothic” resembles a bad dream that was possibly brought upon by some form of narcotic. It’s strange and unpredictable, borderlining on incoherent. Yet does this make nightmares any less vivid? The colorful, surrealistic lighting and the Gothic set pieces blended together perfectly. The wild visuals never ceased to fascinate me and the foreboding sense of dread kept me at the edge of my seat. I once again must stress that it’s not for everyone. But I loved it because everything just clicked with me, even if some aspects would usually be considered ‘bad’.

Nudity: A fair amount, but it’s not always attractive. Sex is a major theme here.