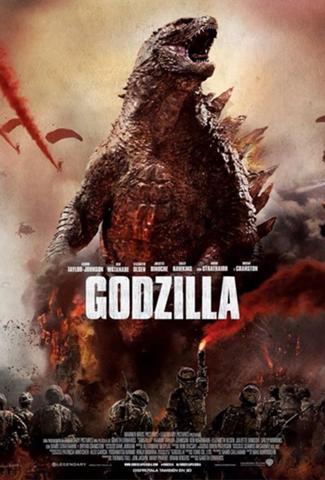 Plot: Civilization becomes a battleground between Godzilla and the Mutos, monsters who have existed since before the birth of man.

Godzilla’s fate at the end of the original “Gojira” (“Godzilla, King of the Monsters“) was very sad, but even that was nowhere near as tragic as the death of his own franchise. Godzilla’s 40 year career of wrestling monsters and stomping on cities initially ended on a tasteful note with “Godzilla Vs Destroyah“, which fans liked. But money was to be made, so the Americans decided to resurrect Godzilla, but with a new monster in the titular role. While you have to give credit to Zilla for not being an imitation of his/her predecessor, fans were outraged and demanded the true Godzilla return to the screen. Godzilla did indeed return, but his advanced age meant he could no longer do his own stunts and CGI had to be used to make up for this. Silliness and snark aside, I don’t hate “Godzilla (1998)” and even find it to be passably entertaining, but I do despite the impact it had on Toho. It was great to see the franchise be resurrected in response to Emmerich’s…anti-masterpiece…but it’s hard to take Toho’s bitching seriously when they kept rebooting the franchise during the millennium era, occasionally even stepping away from Godzilla’s roots themselves and experimenting with awfully rendered CGI. Is it a coincidence that reboots, gratuitous CGI and a campier sense of humor that hadn’t been seen since the Showa days suddenly dominated the millennium era shortly after the big CGI laden, campy reboot that fans and Toho apparently hated? Maybe, but regardless Toho wasn’t able to find their footing, could never master CG imagery and the constant rebooting suggested that they lacked confidence in Godzilla’s staying power. After five short years, the franchise had reached its lowest point in terms of box office profit. Even “Godzilla: Final Wars“, which was designed specifically to cater to the token audience by bringing back nearly every popular monster, was a flop. Godzilla’s grand return was an embarrassment and his future seemed bleak…until Toho decided to give Hollywood another chance. Admittedly, Godzilla has gotten very fat in his old age and he has become so immobile that his entire body had to be rendered using CGI, but the filmmakers of this 2014 reboot have insisted that their film would be a return to our beloved Kaiju’s roots. Yet dark, gritty, and being a metaphor for the atomic bomb does not automatically translate into ‘good’. Has Godzilla earned our respect once more? Let me answer that question with another question: Does Anguirus always lose?

“Godzilla (2014)” is not for everybody and for once, I’m not just referring to whether you’re a fan of the series or not. There will be detractors of Godzilla’s past who will embrace this reboot, while there will be longtime fans who will breath radioactive fire onto it. However, I respect that there has yet to be a Godzilla flick like this one in terms of narrative flow, story and how the characters are used. The closest would likely be “The Return of Godzilla” (“Godzilla 1985“), but even then, I saw more similarities between “Godzilla (2014)” and Shusuke Kaneko’s “Gamera” trilogy. The first act is completely devoid of any kind of monster action, focusing on setting up the characters and the plot. It’s structured like a Government conspiracy thriller, filled with intrigue, suspense and a mystery- which somehow engaged me even though you know where it is going to go (spoiler alert: Monsters). Many have complained that too much time was dedicated to the characters and many others have complained that there wasn’t enough character development. Both sides have valid points, but I didn’t have a problem because I made a connection to the characters. Thee actors gave good performances and had some intriguing dialogue. I was concerned that the family drama would be headache inducing in the same way that the romance drama from the 1998 remake induced bountiful headaches, but the Father-son tension was downplayed and it had a moving pay-off. I will concede that certain characters were underused, but even that didn’t bother me. It’s all build up, but “Godzilla (2014)” sunk its hooks into me from the beginning. I thought this movie had a meatier plot than the majority of Godzilla flicks. which was at least different, if not good.

The second act does contain some monster action, but Godzilla’s absence is pretty noticeable. Instead the mayhem is reaped primarily by the Muto’s, two original monsters who don’t have the most original designs. One looks like a hybrid between Rodan and Gyaos, while the other resembled the “Cloverfield” monster. Nevertheless, they had pretty cool appearances and I liked how they had personalities. Toho has always been good at designing new creatures and giving each their own characterization, like Gigan being a dirty coward or Anguirus being loyal and stupid. Gareth Edwards obviously acknowledged this strength and paid tribute by having the Muto’s being doting parents. They fight for each-other and their family, which makes them tragic monsters when you think about it. At times, I even wondered if Godzilla was supposed to be the villain. The majority of the action is dedicated to the Muto’s destroying cities and the special effects were nearly flawless. One of my complaints regarding “Pacific Rim“- the last American Kaiju film- was that the majority of the action took place in the ocean, during the night, while it was raining. I personally feel the Kaiju genre should focus more on mass destruction in nicely lit, populated areas and “Godzilla (2014)” agreed with me. I love me some city stomping! While apparently unintentional, some of the imagery is reminiscent of real life incidents, giving “Godzilla (2014)” its own thematic material instead of just rehashing the previous critique on the Atomic Bomb. The second act isn’t nonstop action, as it continues to balance the character interactions with the monster carnage. Obviously Gareth Edwards is building up to an explosive finale.

Godzilla does make his introduction near the half way point though, so lets discuss him. The new design is interesting because it’s Godzilla’s body with a different kind of head. Many have complained about his weight, though I thought it fit the new look. The CGI is excellent, but I have to admit that I prefer the Godzilla suit. I also prefer Godzilla’s classic appearance. But at least this Americanized Godzilla deserves to be called Godzilla and the filmmakers give him a personality too. Godzilla is an anti-hero, not being a nice monster, but he has a certain nobility to him that made him more than just a special effect. Godzilla is treated like an actual character. Gareth Edwards loves using establishing shots whenever Godzilla appears and they are definitely awesome. The problem is that they are too effective. They pump you up and just as you think you’re going to get some awesome monster mayhem, the film CUTS AWAY! The first time this happened, I laughed because it provided an (intentionally) funny moment. But seemingly 100 times later, I started to get annoyed. I understand that they’re building up to the third act, but instead of getting me more excited, I became frustrated. That is the biggest flaw in this movie, in my opinion. It gives you radioactive blue balls.

But admittedly the third act is pretty damn amazing. Some have complained about the music being too loud, but I thought the score had to be bombastic. Godzilla has always had ‘big’ musical tracks and the composer delivered just that. At times, the music is more terrifying than the imagery. My favorite moment had to be when the paratroopers drop down into the battlefield. The music (which plays in the trailer), the visuals and the thick atmosphere gave me chills. At one point I swore the composer was ripping off “Jaws” though and I wish Akira Ifukube’s iconic music at least had a cameo. Nevertheless, the final battle was incredibly exciting, well choreographed and the cinematography/editing never got in the way of the action. Occasionally it would disorient the audience, but it was intentional and that tactic was used sparingly. I’m also glad that the humans got to play a role outside of spectator during the finale. “Godzilla (2014)” might spend a bit too much time with its human cast, but I thought they were used more effectively than the majority of Toho’s human heroes. The 3rd act is actually pretty intense and even occasionally scary. It’s hard not to shiver and squeal whenever Godzilla roars. The sound design was freaking outstanding and watching it on IMAX heightened everything about the movie.

You might not care for “Godzilla (2014)” as you might not appreciate the slower pacing, the new designs or the reliance on CGI, but at least it wasn’t a carbon copy of the original. At least it felt like a real Godzilla movie. I thought it was good, although it’s not one of my favorite entries within the franchise. My biggest concern is…what now? Gareth Edwards seems to prefer human oriented monster movies and while I think that worked alright here, it would get old rather quickly if they continue to make sequels. I did want a little bit more Godzilla in the actual Godzilla movie. Part of me wants sequels, but I also want Toho to continue producing Godzilla flicks too. Yet Toho also really dropped the ball with the Millennium Era, and I attributed that to them trying way too hard to beat the 1998 flick at its own game. Would “Godzilla (2014)” make Toho insecure like its predecessor did? I hope not. I’m concerned for the future of the franchise, but at least it looks like the franchise does have a future. I am a Godzilla fan and will always be there for the King of the Monsters, even if it suffers from another Millennium era. But until then, “Godzilla (2014)” satisfied me as a fan, as a wannabe film critic and as a general audience member.

Nudity: None, just a heavy make-out scene. I also was concerned there was going to be a monster love scene, but it never gets explicit.

Overall: “Godzilla (2014)” is worth watching even if you aren’t a Godzilla fanboy, although I wouldn’t call it a great movie. It’s good, nothing more and nothing less.